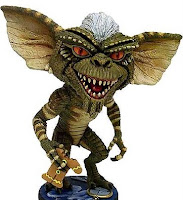 In the 1984 movie “Gremlins”, a young man named Billy was given a unusual gift from his father for Christmas. This very cute creature was a Mogwai which Billy named Gizmo. Most Mogwai are mean spirited and mischievous but not Gizmo. The father was told by the creepy old man that sold him Gizmo, there were three very important things he must follow when owning a Mogwai. 1. Never expose a Mogwai to bright light, especially sunlight. Bright lights will hurt it and the sunlight will kill it.
2. Never feed it after midnight. (I have often wondered, from midnight to when in the morning can you feed it?) It creates a cocoon and what comes out is a fierce little monster called a Gremlin.
3. Never get it wet. If they get wet it will reproduces another which pops from its back.

The father didn’t question these three details that the old man stressed to him, but he did let Billy know what the rules were.

So wouldn’t you know it, Billy’s little friend spilled water on Gizmo and it spawned more Mogwais. However, these creatures appeared to be more deveaous and less sweet than Gizmo. They chewed through Billy’s clock/radio cord so he wasn’t aware that they were given food after midnight. This transformed these Mogwaias into little, evil, destructive monsters known as Gremlins. The Gremilins set out to destroy the town after the leader, Stripes, jump into a pool and spawned hundreds more of them. Basically, Billy saves the day by killing off all the Gremlins but it was not an easy task.

Are gremlins real? Wikipedi calls a “Gremlin as an English folkloric creature, commonly depicted as mishcievous and mechannically oriented, with a specific interest in aircraft. Although their origin is found in myths among airmen, claiming that the gremlins were responsible for sabotaging aircraft. Since World War II, different fantastical creatures have been referred to a gremlins, bearing varing degrees of resemblance to the originals.”

Deep in the jungles of Peru sightings have been reported of a creature, Chullachaqui, is demonic and looks like a gremlin. There have been many recent sightings in the rainforest near the Madre De Dios River, with many local tribesmen in fear of coming face to face with the Chullachaqui. This creature seems to be different from any other creature that lives in the forest. Usually there is a strange whistling sound right before it is seen in the thick Peruvian jungles. It is very fast, between 3 and 4 feet tall, has sharp fang teeth, pointy ears, and fur, with a three-toed footprint and is a night-dweller.

Josh Gates and the Destination Truth team recently went looking for this gremlin-like creature. Check out my recap.  The evidence they collected did not find proof that this creature was real, but for the people of Peru, they believe that gremlins exist.