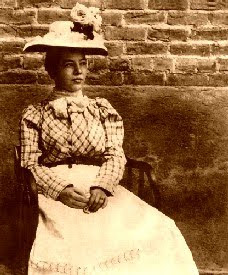 When we took our daytrip to Miami and Globe, we stopped by a couple of cemeteries. Resting in the Pinal Cemetery, near Globe, is Pearl Hart Bywater. Debe showed us where her grave was located and told us a brief history on her escapades. Sharon (Autumnforest) told me that she would make a great post, so I took her advice. I did some research on Pearl but there a many conflicting stories of her life. Some of the details are uncertain and often inconsistent leaving many to speculate what the real story is on this Arizona outlaw’s life. She is acknowledged as the only known female stagecoach robber in Arizona’s history earning her the nicknames of “Bandit Queen” or “Lady Bandit”.

She was born Pearl Taylor in 1871 in Lindsay, Ontario, Canada. Her parents were religious and wealthy affording her the best education. Her father, James, was a civil engineer who moved his family to Toledo, Ohio in 1878. She was enrolled in boarding school at the age of 16. It was there where she met a young man named Frank Holt and eloped with him when she was only 17. He was known as a drunkard and gambler who became more abusive right after they were married. She went home to her mother but reconciled with him several times after that. Together they had two kids, a boy named “Little Joe”, and a girl named, “Emma”. The kids were only eleven months apart in age. There are some stories told that she sent her kids to her mother in Ohio, after she left Frank, and hopped a train to Trinidad, Colorado. The story goes on to say that she possible met another man, a piano player named Dan Bandman, and went with him.

In 1892, she arrived in Phoenix with claims that she worked as a cook or singer, possibly a demimondaine. She lived on Washington Street and developed affection for cigars, liquor and morphine. She ran into her ex, Frank, while living in Phoenix and he persuaded her to move to Tucson with him. They lived well for a brief period but once the money ran out, he became abusive again. Frank ended up enlisting in the military service during the Spanish-American War, leaving Pearl alone. She found it very difficult to survive and became very depressed. She tried to kill herself at least four times but was stopped by a friend. Some say that she wished Frank would be killed by the Spanish.

In the late 1890’s, while she was living in Mammoth, Arizona, which is located 47 miles north of Tucson, she worked as a cook in a boarding house. Other stories had her operating a tent brothel near the local mines and doing quite well until the mines closed. Shortly after that, she got word that her mother was gravely ill and she needed to come home. Desperate for money, she hooked up with a friend, Joe Boot, who said he had a mining claim but found no gold. Many say that Joe Boot wasn’t his real name but that he was using an alias. In May of 1899, the two of them decided to rob the Globe to Florence stagecoach near the settlement of Troy and Kane Springs Canyon. Pearl cut her hair, dressed in men’s clothing, and was armed with a .38 revolver. Boot held a gun on the victims while Pearl stole two firearms and money. They gave each passenger a $1.00 for food, took the driver’s gun and fled south towards Benson. They worked their way up the San Pedro River hoping to get far away from the crime. The stagecoach driver unhitched a horse, road to town and alerted the sheriff, W. E. “Bill” Truman. Then in June of 1899, the Pinal County sheriff caught up with the two bandits while they lay asleep. They were captured near the north side of Benson and charged with armed robbery. Boot went quietly but Pearl put up a fight. 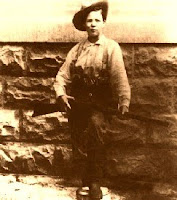 He was taken to Florence jail while Pearl was put in a Tucson jail. Florence’s facility was not equipped for female prisoners. Many people were fascinated by the female bandit, with some showing sympathy for the petite, five foot tall woman. She became the voice for women’s freedom and liberation. While serving time, she felt affection for an inmate trusty named, Ed Hogan, who was a petty thief. Hogan was allowed to freely wander aimlessly and became obsessed with Pearl. Because her cell was made of lath and plaster, Hogan was able to cut a hole in the wall, aiding in her escape on October 12, 1898. She was recaptured two weeks later in New Mexico. When Pearl and Boot finally went to trial, she made a plea saying that she needed the money to see her ailing mother. The jury found them not guilty which angered the judge. He ordered another trial and the pair was convicted and punished. Boot was sentenced to thirty years and Hart for five years. They were sent to the Yuma Territorial Prison to serve out their time. Boot was made a prison trusty, driving a supply wagon for which he used to escape after two years of his sentence.

On November 18, 1899, Pearl was assigned the number 1559, and started serving her five year sentence. She received lots of attention for which she truly enjoyed and used to improve her circumstances. Her cell was oversized, larger than most, and came with a small yard. She used the yard to entertain reporters and other guests. She was released from prison in December of 1902 when she was pardoned by Governor Alexander Brodie. It was two years before her sentence was done and amongst rumors that she was pregnant. It is unclear if this was true but the claims are that the pregnancy would have embarrassed the prison and that is why the pardon was given. There was no evidence of Pearl having a third child and could have been a ploy by her to get released from prison early. In any case, she was given a ticket to Kansas City, Missouri, and asked to leave the territory.

Her later life is also a mystery. One story is that she did a short lived play reenacting her crime and talking about the horror of being in the Yuma Territorial Prison, while living in Kansas City. In 1904, while running a cigar store, she was arrested for receiving stolen property. She was declared innocent of the charge. Another story is that she returned to jail, in Tucson, 25 years after her first time she was put in prison but for reasons unknown. And then there are claims that she lived a private life with her husband of 50 years, George Calvin “Cal” Bywater. They lived in Dripping Springs, Arizona, where she was known as Pearl Bywater. A woman pretending to be a census taker claimed that while at her home she noticed that her clothes were dirty and cigar butts were all over the place. She also suspected Pearl to be the infamous Pearl Hart, Bandit Queen. Her death is a mystery as well. Most claims are that she died sometime after 1928, not able to give an exact date. But other claims state that she died on December 30, 1955 from Cardio Vascular Disease in the Gila General Hospital located in Globe, Arizona. She is buried next to her husband in the Pinal Cemetery which is located near Globe.

Perhaps many of Pearl’s life stories may be just claims with no documents to back them up, but whatever the truth may be, Pearl Hart has earned a place in Arizona’s Wild West history. 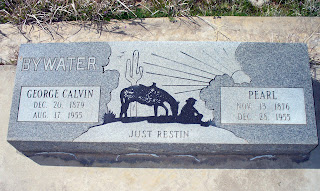