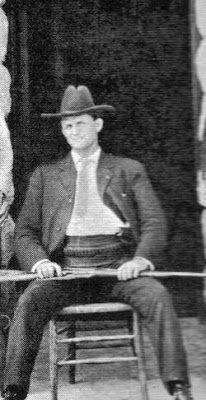 For 8 long terms, John Henry Thompson served as sheriff for Gila County in the years 1890-1912. He was born on December 19, 1861 in Bell County, Texas and in the early 1880’s arrived in the Payson area. He settled and farmed 160 acres which were located under the rim rock of the Mogollon Mountains. People gave him the moniker of “Rimrock Henry”, and that name that stuck with him his entire life.

On January 12, 1887, John married Carrie L. Nash and then moved to the town of Payson and was selected Postmaster. The sheriff of Globe at the time was Glenn Reynolds who was shot to death after escorting the Apache Kid and other rebel Apaches to the Yuma Territorial Prison. Afterwards, Jerry Ryan was appointed to fill the position of sheriff. His term was short lived when he died six months later. He drowned trying to save a family friend. John decided that he wanted the position and needed his neighbor and close friend, John W. Wentworth, to endorse him. Wentworth was a man of importance, a miner and Justice of the Peace in Globe. He wasn’t sure if Wentworth would agree, after all Thompson’s cattle did meander onto Wentworth’s land and destroying his mining equipment. After using his step-father, O. N. Cresswell as a mediator between the two of them, Wentworth finally made the recommendation. On June of 1890, after swearing to the oath of office for sheriff of Globe, Thompson moved his family there. He continued to get elected as sheriff until 1896 when he decided not to run for another term.

Thompson, like many others, was hit with gold fever and decided to travel up to Alaska to see if he could get lucky and strike it rich. In 1890 he returned to Globe but no one knew if he ever found any gold. He started a partnership with Dick Barley in the feed, fuel, and livery stable business. In 1900, he got the bug to run as sheriff again, and added his name to the ballet. He easily won the position at the same time his businesses were thriving. Thompson was able to buy property in town and rent out some of the buildings. He also built his family a brand new home. He took another break from running for sheriff when some of his old mining claims had problems and took up much of his time.

Thompson couldn’t stay away from running for the office of the sheriff of Globe. In 1908, he ran for a sixth time and won. He ended up as Globe’s sheriff for a total of eight terms which ended in January 8, 1912 at the urging of the county supervisor. Thompson and some buddies were having some drinks in the Globe saloon just a few days before Christmas in 1911. All of a sudden a shot rang out and the bartender was dead. Upon investigation of the body, the bullet was a match to Thompson’s gun. He and his friend, Harry Temple were accused of the crime of murder. They were watched over by Frank Haynes, who took over for sheriff after Thompson resigned. They were found not guilty but Thompson’s career as sheriff was over at the age of 51. He had racked up the most arrests and convictions than any other sheriff in Arizona history.

Thompson spent the next 20 years working for the Arizona highway department, selling real estate, mining, and cattle ranching. Carrie died in 1926 and in July of 1932, he married a widow named Allie Smith. Thompson and Wentworth butted heads over many issues throughout the years until his death on August 2, 1934 in Globe, Arizona.

This Wild West lawman, prospector, and businessman have been described by many as Arizona’s most intriguing sheriff. 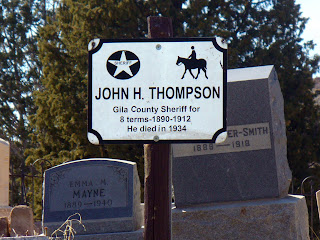