Joseph Isaac (Ike) Clanton was a pivotal player of one of the most famous events in Wild West history, the gunfight at the O.K. Corral. He along with his younger brother Billy has chiseled their place in American Old West history. He was born on June 1, 1847 and one of seven children. His father, Newman Haynes Clanton was known as Old Man Clanton by many and was a day laborer, a gold miner, a farmer, and by the late 1870’s, a cattleman in the Arizona Territory. His mother was Maria Sexton (Kelso) Clanton and died in 1866 in a mining center.


After his mother’s death, Ike stayed with his father and brothers, Phineas (Fin) and Billy after they moved to Tombstone. His father ran a small lunch counter and then a ranch which Ike worked on. The Clanton boys earned a bad reputation and were accused of cattle rustling, banditry and murder. Ike didn’t gain fan as a notorious bad boy until his many conflicts with the Earps and Doc Holliday. He was an ill tempered, heavy drinking loudmouth that was constantly bad talking about the Earps.

The problems between the Earps began right after Wyatt arrived in Tombstone in November 1879. Wyatt’s horse was stolen and a year later he found out that it was in Charleston on the Clanton’s ranch. After getting ownership papers proving the horse to be his, Wyatt and Doc headed out to their ranch. They were met by 18 year old smart mouth Billy, who was somewhat threatening to steal more of his horses. He finally retrieved his horse, which seemed to anger Wyatt and Ike as well. After that, the Clantons and the Earps both exchanged accusations that each was committing the many crimes happening in and around Tombstone.

On October 25, 1881, Doc Holliday confronted Ike about a stagecoach robbery which angered him. Ike got very drunk and belligerent and shortly afterwards, an argument with Holliday ensued. Morgan and Virgil threatened to arrest the both of them if they didn’t stop, so they did. They left the scene, Doc to get some sleep, but Ike stayed up through the wee hours playing cards with Tom McLaury and Virgil Earp. When the game was over and the other boys went to bed, but Ike kept drinking and was seen carrying his rifle in the middle of town, yelling like a fool, threatening Doc and the Earps. Virgil and Morgan were able to get the jump on Ike, knocking him out and throwing his filthy butt in jail. He was fined for carrying a weapon in the city, paid the fine and had a heated exchange of words with the Earps as he left.

Ike, along with Tom McLaury, later met up with his younger brother Billy and Tom’s brother, Frank, in back of the O.K. Corral. They were angered by what the Earps did to Ike and made strong threats against them. The Earps got wind of the threats, headed down the street towards the O.K. Corral, and was joined by Doc Holliday. They went there to retrieve the McLaury’s and Clanton’s weapons, and a few minutes later history was made. At 3:00 pm on October 26, 1881 in a vacant lot behind the O.K. Corral, a gunbattle ensused and at the end, three men were dead. There were reports by witnesses that Ike was unarmed and was able to skinned out unharmed along with Billy Claiborne, but his little brother Billy and the McLaurys were not as lucky. Afterwards there was a hearing against the Earps who were accused as being murderers.

In his usual fashion, Ike tried to spin the story making it look like the Earps and Holliday went to the corral with the intent to purposely murder all of them. He painted them as cool blooded killers and lied about other incidences from the past further making them look like liars and thieves. However, the Earps had a better defense and with all that Ike tried to do to get them convicted of murder, the charges were eventually dropped.

In December of 1881, Ike along with his brother Fin and Pony Diehl, attacked Virgil Earp in an attempt to assassinate him. Virgil didn’t die but was disabled for life. Ike was arrested but his friends provided him with an alibi, so the judge had no choice but to dismiss the case. There attempt to kill Virgil failed but in March of 1882, Ike along with Frank Stilwell and others, attacked Wyatt and Morgan leaving Morgan mortally wounded. He eventually died from his wounds causing Wyatt to remove Virgil from Tombstone for his safety. After Wyatt killed Stilwell, the Earp Vendetta Ride went after Ike and the other cowboys involved in the slaying of Morgan and the second attempt on Virgil’s life. Ike escaped again but his hell raising days were not over yet.

After getting caught cattle-rustling with his brother Fin, they were trapped at the Jim Wilson’s Ranch on Eagle Creek, near Springerville, Arizona by Detective Jonas V. Brighton on June 1, 1887. Fin surrendered quietly but not Ike. He was shot twice with the fatal blow going through his heart. He fell off his horse and hit the ground dead. There were many reports of where his body was buried, but it wasn’t until 1996 that a remaining relative, Terry Clanton, along with grave expert, James A. Browning, found where it was officially located. Under a large tree near the creek in Greenlee County, Arizona, is a shallow grave they believe to be his. Even though Terry has tried to get Ike’s remains buried in the Boothill Graveyard near Tombstone, the town’s officials feel that his remains shouldn’t be bothered. 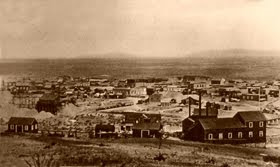