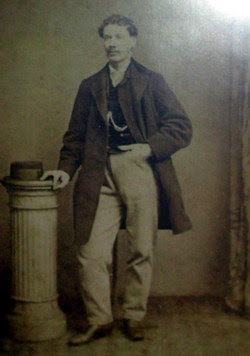 Tombstone seems to have an endless supply of stories from the notorious bad-boys, sultry women, famous lawman and places around town. Everyone knows plenty about the Earps, especially Wyatt, but I find that the lesser know people of this once booming mining town have the more interesting stories. They have also carved their names in the history books of the American Wild West. Curly Bill Brosius is another of those slightly mysterious outlaws that you may know little about.

William “Curly Bill” Brocius (or Brocious) has left his mark in American Old West history as an outlaw, gunman and a member of “The Cowboys” outlaw gang of Tombstone during the early 1800’s. He was born in 1845 in Crawfordsville, Indiana and his middle name was Graham. There is only one known picture of Curly Bill (above picture) and that one hangs in the Bird Cage Theatre Museum in Tombstone. He is described as a tall stocky man with freckles and dark curly hair.

As part of the Cowboys, Curly Bill was known to have the fastest shot of the gang. He was known to be able to shoot a running jackrabbit, candle flames out without touching the candles, and quarters between the fingers of anyone who was crazy enough to offer their assistance. Curly Bill was a nasty drunk that enjoyed making people dance by shooting his gun at their feet. Sometimes when feeling particularly wild, he would have them strip naked first.

Some documents have Curly Bill entering the Arizona Territory by way of Texas in 1878, but his earlier life is still a mystery. On October 27, 1880, Wyatt Earp escorted him to Tucson for shooting a town Marshal, Fred White. He claimed that he was drunk and his gun accidentally went off while White tried to arrest him. White died two days after being shot and before he died, confessed that he felt the shooting was an accident. Curly Bill still spent a couple of months in jail but was later acquitted with a ruling of accidental death.

There are many stories told about Curly Bill where he was involved in other crimes such as a robbery where a man was murdered, and then later a prison escapes with another man, Robert Martin. Curly Bill’s rumored history puts him with Martin in the Jesse Evans gang; a bunch of derelict mix match criminals that Billy the Kid was briefly was a part of before becoming one of John Tunstall’s Regulators. He was believed to be a part of the many crimes committed by the Cowboy gang.

Curly Bills notorious ways were more known after meeting the Clanton gang. He once rustled cattle and even was a tax collector for a sheriff making other rustlers pays taxes on their stolen cattle. He was shot in the neck by a so-called friend after a heated exchange of words. Since the bullet went through his neck and out his cheek, he survived to continue on a murderous rampage. In July 1881, he and Johnny Ringo murdered two men all in the name of revenge for the Clanton gang. He led an ambush again a Mexican trail herd killing six men and torturing the others. Because there was no way to prove that Curly Bill was a part of the killings, no charges were ever brought upon him. Later he earned the reputation as “Arizona’s most famous outlaw” and loved the recognition.

After the gunfight at the O.K. Corral, there are stories that Curly Bill was present at the attempt on Virgil Earp’s life and the murder of Morgan Earp. There was no proof or eyewitnesses putting him at the scene of the crimes but the Earp Vendetta Ride still had him on their revenge list. It was on March 24, 1882 that Wyatt was able to sneak up on Curly Billy’s camp and kill him with one single double shotgun blast to the chest about 50 feet away. Curly Bill was able to get a shot off at Wyatt before dying, but only winged his coat.

There are other tall tales stating that Wyatt didn’t kill Curly Bill who heard about these stories years later. It was told that he changed his name and moved back to Texas until he died. There was a $2,000 bounty on his head, if he was seen alive. That bounty was never claimed. Other stories state that after his death, he was buried on the Babocomari River, near the McLaury ranch, on land believed to have been once owned by Frank Stilwell and five miles west of the ghost town of Fairbank. If he was buried there, his gravesite is lost by all the wild vegetation that has grown around that area over time. Whatever the truth may be about this notorious bad-boy, he and his dusty old hat were never seen again in Tombstone after March 24, 1882.
outlaws wild west