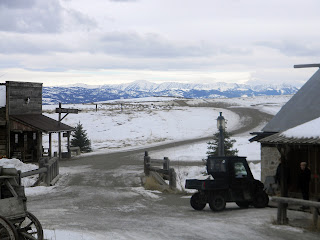 January started the year out with two fantastic trips.  My husband won a trip for two to Crazy Mountain Ranch in Montana.  It was four days, three nights, during the dead of winter, and for us Zonies (Arizona people) it was going to be colder than we were used to.  Part of the winnings included airplane tickets, money, full winter wardrobe, fantastic food, and fun events.  We took a ride on a zip line, road on a dog sled, and froze our butts ice fishing.  It was a blast.  Here are links to the posts I did on this awesome trip:
http://above-the-norm.blogspot.com/2011/01/crazy-mountain-ranch.html
http://above-the-norm.blogspot.com/2011/01/montana-wilderness-and-ice-fishing.html 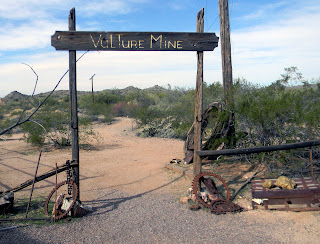 The next place I went to in January was Vulture Mine, AZ.  I saw those wacky boys from Ghost Adventures investigate the place and wanted to see it for myself.  Sharon and I decided to make Vulture Mine our first stop on our trip to Prescott to stay at the haunted Hotel Vendome.  The place ended up being so much more than just broken down abandoned buildings.  It was a photographer's dream.  The buildings had the best light flowing through them, and inside there were so many objects which each provided their own special look for my pictures.  After seeing the main buildings, we were treated with huge metal structures down a dusty path with old rusty machinery still inside.  I must have take over a hundred pictures of that place.  Right now, Vulture Mine is closed, but I am looking forward to the new owners opening the doors and letting us roam around the haunted historical sight.  Here are links to my posts and photos to Vulture Mine:
http://above-the-norm.blogspot.com/2011/01/vulture-mines-dead-mans-playground.html
http://above-the-norm.blogspot.com/2011/02/vulture-mine-part-one.html
http://above-the-norm.blogspot.com/2011/02/vulture-mine-part-two.html 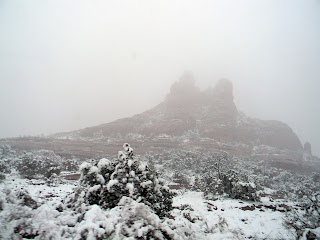 Sedona is a beautiful place to visit but this year I got to see the place with snow on the red rocks.  It was April when Sharon and I was helping with a fun game called "Cemetery Crawl".  We had a couple of place we were to be at to make sure that all the contestants made it and we gave them directions to their next destination.  It is a bit like the Amazing Race, Arizona style.  We froze our butts off at the Mayor, AZ, cemetery and then headed off to Flagstaff where we were to meet up with everyone involved in the race.
The highway department was diverting everyone through Sedona because the snow was coming down too hard on the highway to Flagstaff.  We were supposed to take the steep, one-lane back road to get to Flagstaff but it was snowing so much we turned around.  We ended up staying in Sedona and having a great time.  Needless to say we did not make the rest of the race because of the weather.  I ended up going to Sedona two weeks later with my husband and there were no signs of snow anywhere.  Here are the posts I did on that trip:
http://above-the-norm.blogspot.com/2011/04/trip-plans-changed.html
http://above-the-norm.blogspot.com/2011/04/springtime-in-sedona.html 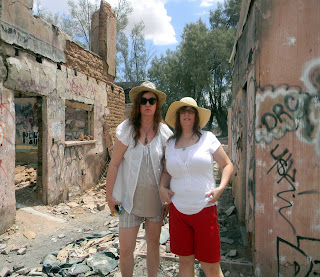