He was born Frederick G. White sometime around the year 1849.  Many just called him Fred and he would go down in history as the first “town marshal” of Tombstone when Arizona was a territory and the town was just new.  It was on January 6, 1880 when White was elected when Tombstone only had around 1,000 residents.  He died from an accidental shooting while in office when he was only in his early 30’s.  After his death, Virgil Earp took over as marshal of Tombstone.  Some people say that the spirit of Fred White can be seen lingering around the street where he was shot.

In movies, White was seen as an old gentleman, with a not so pleasant disposition and not conforming to the standards of what a lawman should be.  Many would say he was well liked and had the respect of not only the Earps, but the Cowboys as well.  It was told he had their cooperation when having to arrest any members of the Cowboys.  You would think that with “Curly” Bill Brocius nasty behavior they would be mortal enemies, but the stories told are that they actually got along.  So how did Brocius accidentally shoot White to death?

History says that on October 28, 1880 some of the members of the Cowboys were in town consuming lots of liquor, were rowdy, and shot their pistols up to the night sky.  White dealt with each of them, surrendering their weapons without confrontation.  When he met up with Curly Bill, he found him extremely drunk and shooting his gun off.  White demanded his pistol and Curly Bill handed it to him barrel first.  When White snatched the weapon, it discharged and shot him in the groin area.  Wyatt Earp, who witnessed the shooting, pistol-whipped Curly Bill and knocked him unconscious thinking he shot him on purpose.  Wyatt and his brother Morgan eventually arrested him for shooting Marshal White.

Curly Bill was said to have regretted shooting White and that it was an accident.  White lived for only two days after the shooting.  He died in October of 1880 and just before his death he testified that the shooting was an accident.  He noted that the gun was half cocked and because Curly Bill was so drunk he never noticed it.  Because of White’s testimony, all charges were dropped against Curly Bill.  White was buried in the Boot Hill Cemetery (old city cemetery) in Tombstone.  A sign stands at the site where Marshal Fred White was shot by Curly Bill Brocius. 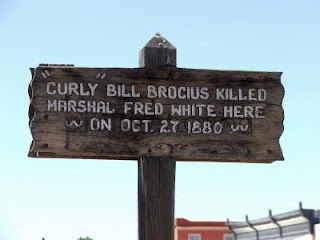