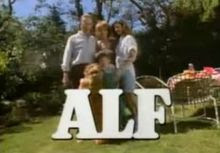 His name was Gordon Shumway, born on October 28, 1756, and stands around 3 feet tall.  He doesn’t look like your typical person because he is not human.  His body is covered with burnt orange hair or fur, and his face has a long snout with moles.  His heart is located in his head and he has eight stomachs with an appetite for cats.  His home planet is Melmac which is many light years away from Earth.  He grew up on the Lower East Side of the planet and hung with his girlfriend, Rhonda, and best friend, Skip.  He managed to graduate high school after 122 years and participated in sports such as Bouillabaisseball where he was the captain of his team.  Then one day, Gordon’s life completely changed forever. 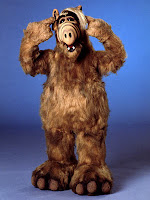 While flying around the galaxies looking for lint, gravel, and foam, which are precious commodities for Melmacian survival, Gordon followed an amateur radio signal which leads him to Earth.  He ends up crash landing in a suburban neighborhood and right into the Tanner family’s garage.  The Tanners consist of parents, Willie and Kate, and their two kids, Lynn and Brian.  They live in the San Fernando Valley and Willie is a social worker.  The entire family was in the garage when ALF (Alien Life Form) as they called him, crash landed in their lives.

They take ALF’s lifeless body into the house and try to figure out what to do with him.  He wakes up and ask the family if they can fix his spaceship so he can go home.  He also told the family he was hungry and wanted a cat to snack on.  They quickly realize their cat, Lucky, was in danger of being eaten by the smart ass alien and that staying with them is a huge mistake.  Willie expressed concern about ALF being seen by his nosy neighbor, Raquel Ochmonek.  She does get a glimpse of the half-pint alien but he husband, Trevor, thinks she is losing it.

ALF quickly gets comfortable living with the Tanners.  The kids love their new live in stranger, but Willie and Kate are not sure if they want him to stay.  Finally, ALF informs the family that his home planet, Melmac, exploded from a nuclear war disaster and he has nowhere to go.  When the Alien Task Force shows up at their door, and they get a glimpse into what they will do to ALF, Willie and Kate have a change of heart.  ALF because part of the family but he is not an easy thing to live with.  The Tanners have to put up with the alien’s antics while he deals with being the only one of his kind left, ruining things around the house while suffering from boredom.  Throughout it all, the family does whatever it takes to protect the little booger from being dissected and probed by the ATF.  Even though he frustrates the family and they are fearful of people finding out about him, they grow to love him. 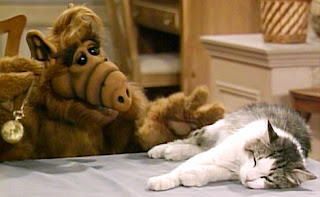 In 1986, NBC aired a sitcom on Monday nights called “ALF”.  My daughter and I would not miss an episode.  The short little furry alien was funny with his snappy comebacks and constant antics.  The character, ALF, was a live-hand puppet operated by Paul Fusco.  The show only lasted 4 seasons, but we enjoyed each one.  One of our favorites was when ALF had a stole-away on his space ship, a Melmacian cockroach.   It was no ordinary roach; it got larger whenever pesticides were sprayed on it.  While ALF was trapped in the bathroom by the cockroach, which had reached an enormous size, he sprayed it with perfume which finally killed the beast.  I swear, I have seen sewer roaches around here that get that big!
http://www.youtube.com/watch?v=b5DWbVDzitw