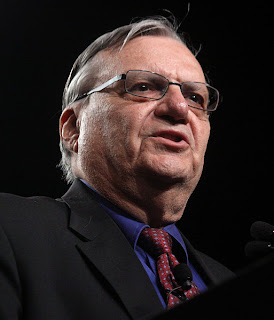 "Joseph M. "Joe" Arpaio was born on June 14, 1932 and is the elected sheriff of Maricopa County, Arizona.  First voted into office in 1992, Arpaio is responsible for law enforcement in Maricopa County.  This includes management of the service of process.  Arpaio styles himself as "America's Toughest Sheriff".  He is well known for his outspoken stance against illegal immigration.  Arpaio has become a flash point for controversy surrounding Arizona's SD1070 anti-illegal immigration act.  He is also know for his investigation of President Barack Obama's citizenship.

Arpaio was once widely popular among voters in Arizona.  His popularity has waned since 2007, notable among independent and Republican voters, but he still has a 57 percent positive job rating among Republicans; he has been re-elected five times."

Love him or hate him, he will go down in history as one of Arizona's most colorful sheriffs.  What do you think of Arizona's so-called "toughest sheriff"?