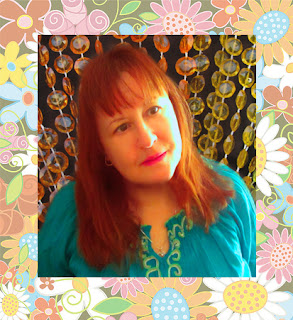 (Exert from the Zombie Housewives of the 1960's book.)
"My parents named me Barbara, an old family name. It wasn't even a relative my mother liked. My family was your typical upper middle class Republican types. My dad was a successful sell-out corporate defense lawyer and Mom had been his secretary-turned-wife. Can it get anymore classic than that?  I was the first born and it was pretty clear that Dad wanted a son and when my baby sister Colleen came along; he turned his attention back to his martini and let Mom speak for him.

I didn't see any clear advantages to being a housewife though both my parents urged me to go to college and find a nice man to marry. My mother didn't seem all that happy with her position as breeder, cleaner, and cook. In fact, I could tell she was frustrated by the way she would wallpaper and redecorate the rooms all the time, constantly fuss over Julia Child’s recipes, and generally be a Nazi about appearances.

I didn't go to college. Instead, I had a series of odd jobs that confused them and angered my mother since none of them involved me meeting marriageable men. I went from dishwasher to weekend clown at kid’s parties, then on to tarot card reader and topless dancer.

My parents died when I was 26.  It was kind of liberating. I realized that, without their expectations for my future, I could make it anything I want and not have to listen to the constant comparisons with their friends’ children who were caving in to the capitalistic suburban sell out.
Then, I found my people; a loving group who questioned the system, the rules and morals of our parents’ generation. We wanted peace, love, and unity, not mortgages, corporate jobs and miserable marriages.

I did a little experimentation, but eventually it led me to the realization that I am a part of a bigger movement; a movement for freedom and rights, community and artistic expression.

I renamed myself Blossom. It’s the name I should have had from birth because I am always unfolding, beautiful just as I am. I am a bloom that represents the new life for my generation." 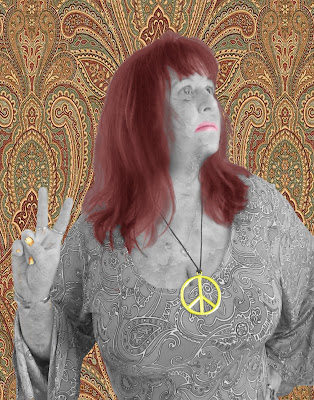 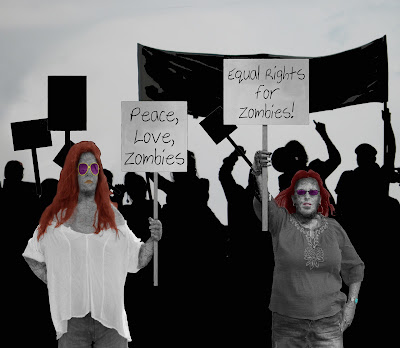 As a zombie, Blossom turned her energy on "equality for zombies" and "zombie rights".  She lives in a zommune with not one but two zombie men, Billy and Jack.  Both men were in the military and left to fight in Vietnam as young humans.  Forced to be a part of a "superior fighting force" by becoming zombies, they were treated like "killer ghouls" when they returned back home. 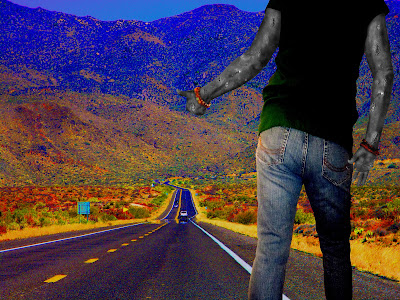 Check out the following blogs and see what zombie theme post they put up:

A Dust Bunny In The Wind

Flesh From The Morgue

Some One Else's Cook

Forget About TV, Grab a Book

Love is a Many Flavored Thing

Something wicKED this way comes....

This Blog Has A.D.D.