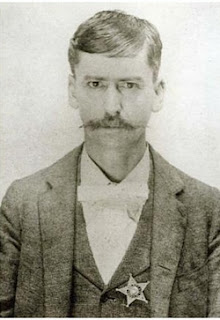 Born on February 5, 1861, Frank J. Wattron, became the first elected sheriff of Navajo County.  Technically, in 1895, Commodore Perry Owens was appointed the first sheriff of the newly formed county and Wattron worked under him as a deputy.   He once worked as a teacher and editor until being sworn in as second-in-command.  A year later in 1896, it was the first official election for sheriff.  Owens uprooted his family to another location and Wattron was chosen as sheriff.
During his time as the chief law enforcement officer, he pulled a contentious move.  In December of 1899, killer George Smiley was being held at the Navajo County Courthouse.  He was sentenced to be hung on the 8th and Wattron thought it would be fun to send a “novel” invitation to the event.  Pushed by his friends, he sent businesslike requests on gilt-bordered paper which stated, “The latest improved methods of scientific strangulation will be employed and everything possible will be done to make the surroundings cheerful and the execution a success”.  He played off the event as if it was a “social affair”.  A reporter got a hold of an invitation and wired it to the Associated Press.  This action caused many to protest sending letters to the paper saying that the sheriff showed poor taste and a bad sense of humor. He was chastised for his blatant disrespect of the law.  Because of his actions, it was decided to grant Smiley a month’s stay of execution.  On January 8, 1900, Smiley was finally hung at the gallows and justice was served.

Although Wattron will be known as the sheriff who made that bozo move, he will also go down in history as well respected by many for taking care of all the scandalous bandits and murders along the eastern border of Arizona.
lawman wild west