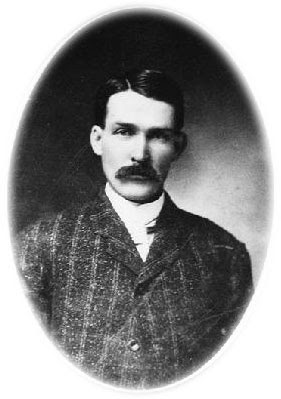 The youngest of the Earp brothers, Warren, as he was called by everyone, was born on March 9, 1855.  He had five older brothers to look up to (Wyatt, Virgil, Morgan, James and half-brother Newton) and was not in town during the Gunfight at the O.K. Corral.  He showed up in Tombstone afterwards to join Wyatt.

Not much information on the early years of the youngest Earp.  He did serve sporadically as a deputy for his brother Virgil gathering taxes and sometimes doing guard duty when needed.  He, along with his brothers, often times had skirmishes with the gang known as the Cowboys.  But during the famous shootout, Warren was in California visiting with his parents.  He came back to Tombstone after Virgil was ambushed, mortally wounded, and was deputized by Wyatt.  Warren’s big brother Morgan was shot and killed while playing billiards on March 18, 1882.  He was part of the gang who guarded Virgil and his wife on the trip to Tucson so they could catch a train to California.  They spotted Frank Stilwell waiting at the station and were able to kill him before he got to Virgil.

When he returned to Tombstone, he joined Deputy Marshal Wyatt and others as part of the Earp Vendetta Ride.  After the ride was done, Warren moved out of Arizona and would not return until years later.  In 1891, he drove the mail stagecoach from Willcox to Fort Grant.  There are other stories that Warren used his brothers’ fame to further his status.  People knew him as a tyrant with a bad temper.  Virgil was certain his bad demeanor would get him killed and he was right.

It was on July 6, 1900 when Warren and a man named Johnny Boyett butt heads inside the Brown’s Saloon in Willcox.  There were rumors that their fight was over a soiled dove, but the paper stated that it was Warren’s temper and constant taunting that got Johnny mad.  The two intoxicated men kept arguing, so Warren stepped out for a second.  Johnny shot as him twice, but missed.  Warren walked back inside saloon, said he wasn’t armed, but kept walking towards Johnny.  Two more shots were fired, but again did not hit his intended victim.  He yelled for Warren to stop, but he wouldn’t so he shot the fatal bullet, hitting Warren in the chest and killing him.  Johnny claimed that he was scared and in fear of his life.  When they examined Warren’s lifeless body, they only found a pocket knife on him. No arrest was made at that time.  It wasn’t until Virgil came to town, talked to witnesses and concluded that his brother’s death was a “cold blooded murder”, that Johnny was finally detained.

The Tombstone Epithaph printed on July 9, 1900 in their paper this:  “Warren Earp, the youngest of the four Earp brothers whose names twenty years ago were synonymous with the gun fighting on the Arizona frontier, died with his boots on here.  He was shot through the heart in a saloon by Cowboy Johnny Boyett, and died almost instantly.”
historical lawman people wild west