The more believable story was that he was found shortly after death and preserved in a high level of arsenic. Arsenic was used to stop the physical occurrences of a corpse rotting by killing bacteria and insects that invaded it. This custom of using arsenic was found to be poisonous by the 1900’s and never used again. No one really knows who put his body in arsenic. Perhaps it was one who profits on this type of behavior. His mummified body was displayed in a sideshow for all to gawk at. People wanted to see the Wild West outlaw mummy that was found in the desert. In 1955, the Ye Olde Curiosity Shop in Seattle, Washington acquired Sylvester and put him in a glass case for display. This is where Sylvester has been ever since.

There were many that wanted to know if Sylvester’s story was true, or just an urban legend. Experts were sent to examine the body to see if it was a real person or a very clever wood carving made to look like a mummy. They would have to head up to Seattle, Washington, to get their answers.

Upon first inspection they noticed that Sylvester was highly polished and weighed about 100 pounds. The desert sands would have soaked out the liquid of his body, leaving the mummy to weigh about 20 percent less of his living weight. The mummy's weight meant that Sylvester was a very heavy man, around 500 pounds. Also, if he was mummified by the desert sands, his skin should have been dry, not smooth and shiny. They expected to find a varnish on the surface to explain the glossy phenomena, but found none. They did find a great quantity of arsenic in the analyses of the hair and skin.

The next thing they tried was to use an X-ray machine to see what the image will reveal. They were surprised to find internal organs and human bones. This means that he was once was a real live human and was mummified in death. They examined him more to see what the cause of death would have been and found a bullet in his abdomen and another in his collarbone. They still didn’t get an answer why his was so heavy, so the used a 3-D imager to get a distinct view.

After all the scans and X-rays, they found all his organs complete, with buckshot fragments lodged in several areas of his body and even one in his right cheek. The massive buckshot could explain the weight. The examination of his teeth revealed that he was probably between 35 and 40 years of age when he died.

The question still remains, was he really mummified in the desert while on the run, bleeding from his wounds? Or, did someone find him right after he died, preserved him in arsenic and used his mummified body as a sideshow freak display? I just may have to take a trip to Gila Bend to find the truth, if it is out there. 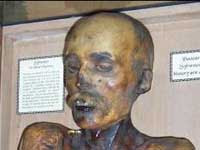