Showing posts from March, 2013
Show all

Oddities in the Desert 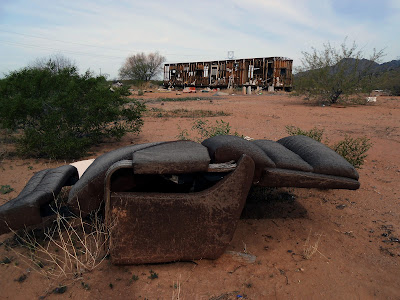 Lastly, from the trailer park is the odd things we found while wandering around the place. a recliner toilet ski and empty bottle of booze delivery truck little devil boat (in dry dock) clothes melting into the dirt nuts or snake eggs? a partial welcome The wood sign with no words. The partial glove giving the appearance there is a body buried under the rubble.
3 comments
Read more Throughout the mess, we saw signs that life once existed in this desolate place.  Scattered among the rubble were toys, furniture, and small items once used by a person or family.  Now, they are just memories. Bedroom Furniture The Yellow Pages Wagon and Blanket Outdoor bathroom (tub is missing, it was there 2 years ago). Mattress, broken wall boards, and shutters. A child's doll. VHS movie (Harry Potter) No more school. Color among the dullness. Time to go.....
Post a Comment
Read more 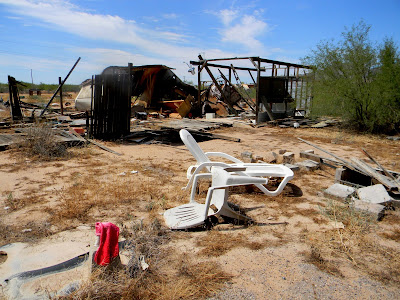 We are never disappointed when we visit the "trailer park" near Mobile, AZ.  There seems to be less and less of the lone standing trailer.  You can see the mountains behind the area through the trailer.  One of these days we expect this trailer will finally fall like the others before it.
Post a Comment
Read more

Where Have The Children Gone? 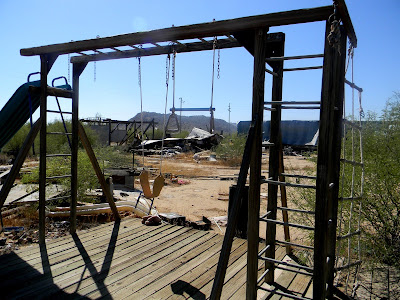 What a difference over two years makes.  Sharon and I headed out to Painted Rock to take photos of the petroglyphs.  Along the way are a couple of places we wrote about in our Abandoned Places: Abandoned Memories (Desert Edition)  book.  The first place was the abandoned trailer park where the child's swing set once stood.  Now, it is in pieces and scattered around the area.  It is sad to see this, but the area is located in an open range where the winds are not forgiving.  The harsh desert weather has raised havoc on this place.  I will have a few posts on what I found along with the lone trailer shell which is still standing. 2010 2010 2010 March 2013 March 2013 March 2013 March 2013
2 comments
Read more 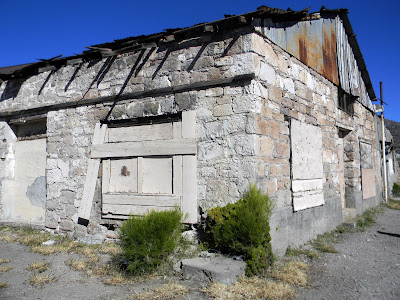 This sweet abandoned place was found in Superior, AZ.  I don't know how we missed it the other times we were in this small mining town, but I am glad we came across it this time.  It looks like it probably was some type of business.  Whatever it was, it now sits empty and boarded up like many other places in Superior.
8 comments
Read more 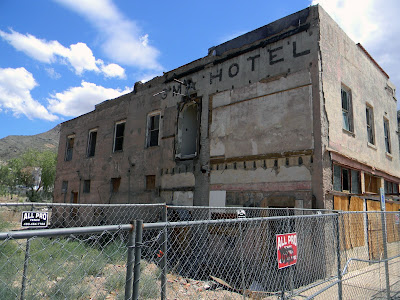 They now sit abandoned in downtown Superior, AZ, but were once the place to stay while in town.  In 1912, the Magma Hotel was constructed with an adobe portion added four years later.  In 1923, the red brick MacPherson's Hotel Magma was finished and managed by John M. MacPherson for a couple of decades.  These large two-story hotels were bustling with activity when Superior's mines were at their most prosperous. But in 1981 when the mines closed, the town of Superior along with its businesses suffered.  The hotels took a hit and eventually closed their doors. Today, they are empty with only memories and possibly some of the town's past residents or visitors still staying at these hotels.  There have been claims of paranormal activity among the ruins.  Some have reported seeing apparitions, or hearing disembodied voices and unexplained noises.  A fence surrounds the decaying walls of the hotels, keeping curious onlookers from getting hurt.
1 comment
Read more
More posts