Showing posts from January, 2014
Show all

The View From The Jerome Grand Hotel 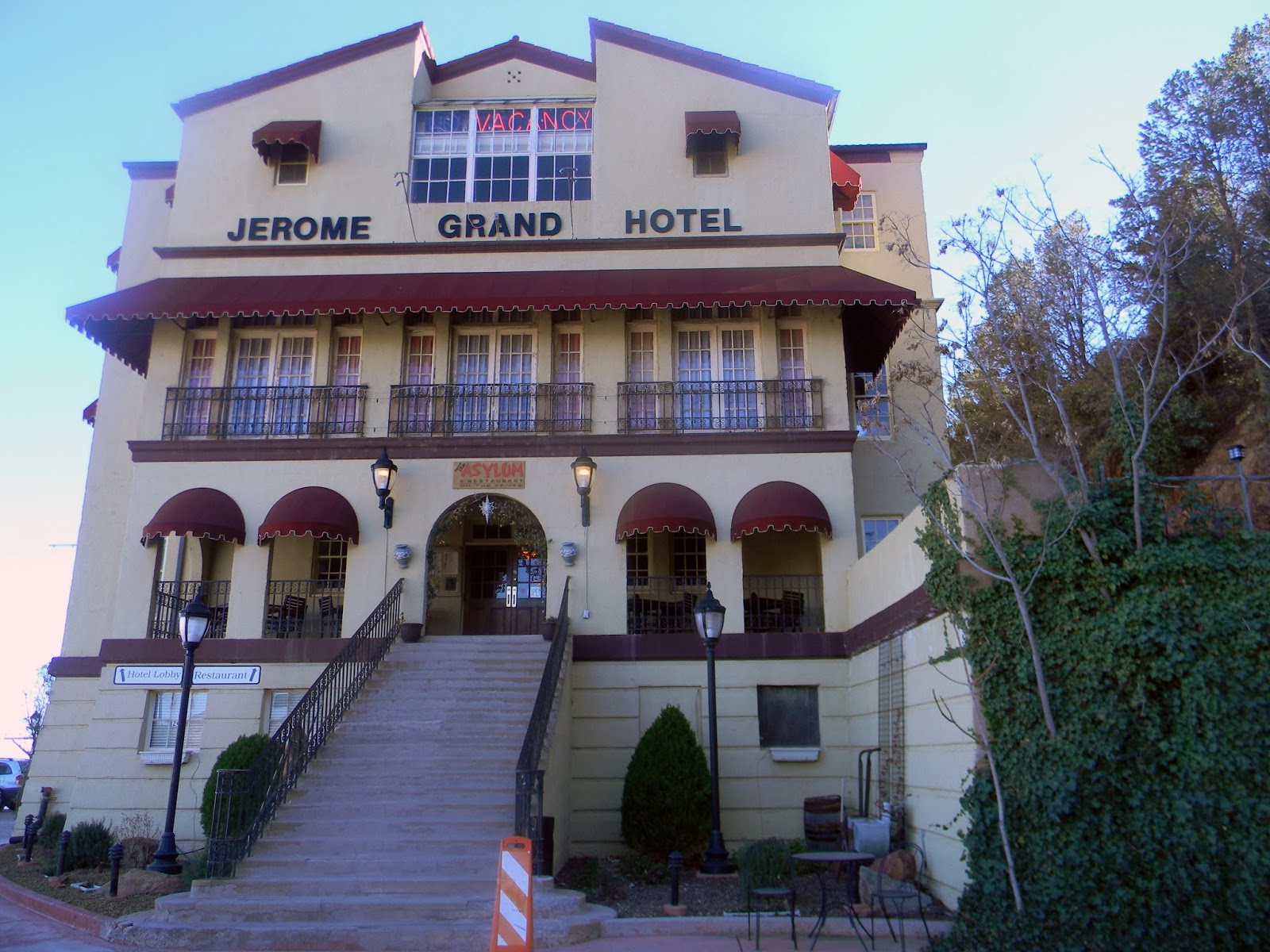 From the very top of the hill and up a narrow road sits the Jerome Grand Hotel.  This majestic hotel was built in 1926 and started out as a hospital.  It was named United Verde Hospital and was the most furnished hospital in Arizona with all the latest equipment.  By 1950 the mines dried up and the hospital closed its doors.  For over 44 years the structure stood abandoned until it was bought and renovated.  The name was changed to the Jerome Grand Hotel.  Shortly after opening for business in 1997, many stories of paranormal activity were reported by witnesses.  Many believe that the spirits of those who died when the building was a hospital are still hanging around. From the outside of the Jerome Grand Hotel the view of Jerome and the Verde Valley is breathtaking.  You can see the winding road through town, the towns of Clarkdale and Cottonwood below.  Off in the distance is a magnificent view of the red rocks of Sedona.  You can see for miles and miles of the amazing terrai
Post a Comment
Read more

Ghosts at the Connor Hotel 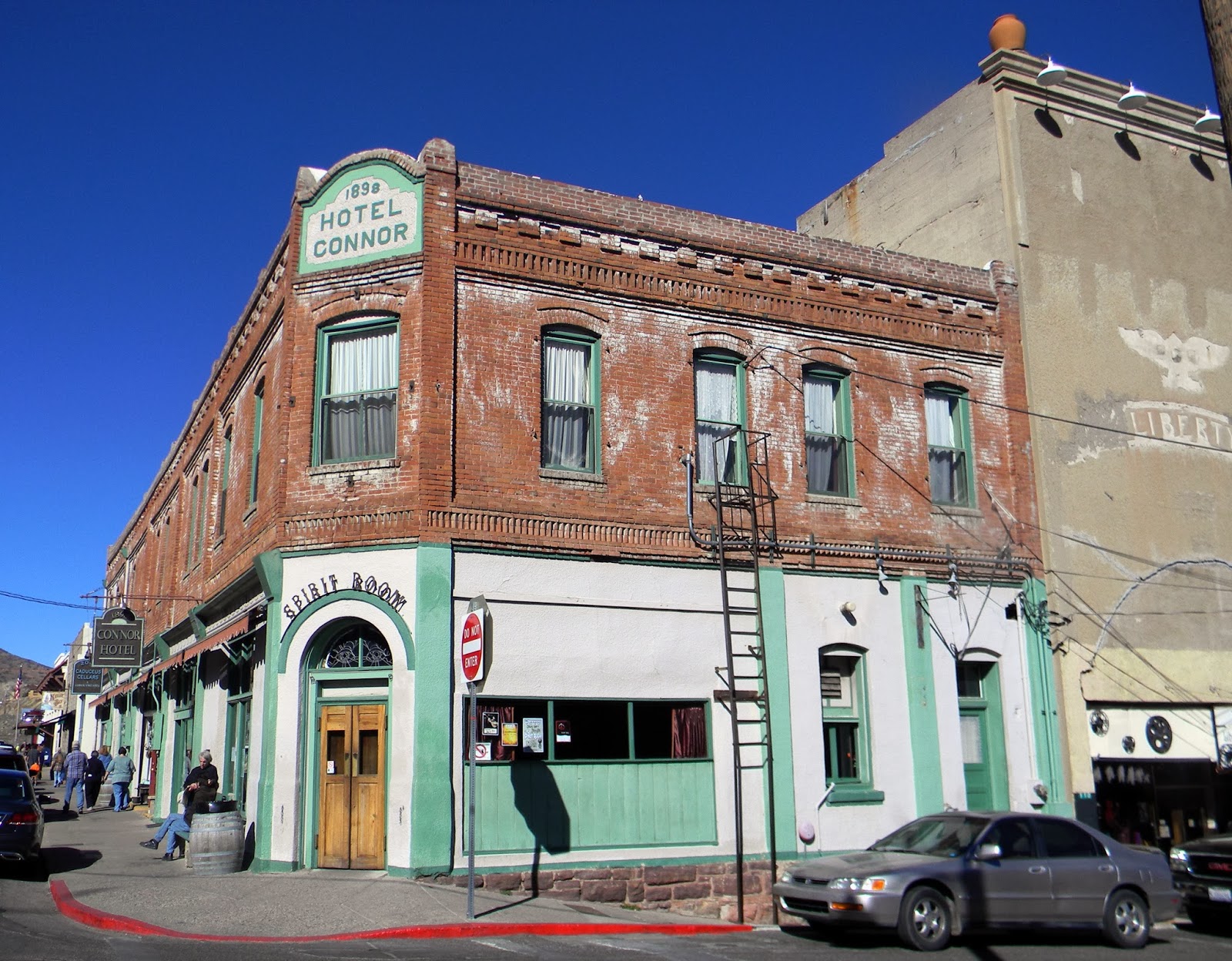 Jerome, Arizona In 1898, David Connor built a lavish 20 room hotel which offered weary travelers and other visitors a warm place to spend a night or two.  The first floor of the hotel had a saloon, card rooms, and billiards.  Bad luck followed with the hotel burning down not once, but twice.  It was reconstructed each time, boasting a grand reputation and always having each room booked.  In 1931, the Jerome mines were struck with  tragic incidences  such as fires, floods and the mines drying up.  When the mines shut down, the Connor hotel was hit hard and had to close its doors.  During the 1960s and 1970s, the hotel was revived but not as lavish as it once was.  But by the 1980s it had to close once again stating safety violations.  It would be about 20 years before it would get the well needed renovations it so desperately needed.   With all the noise and changes, many reported strange, ghostly activities at the Connor Hotel.  In room 1 there are claims of whispering and a wom
3 comments
Read more 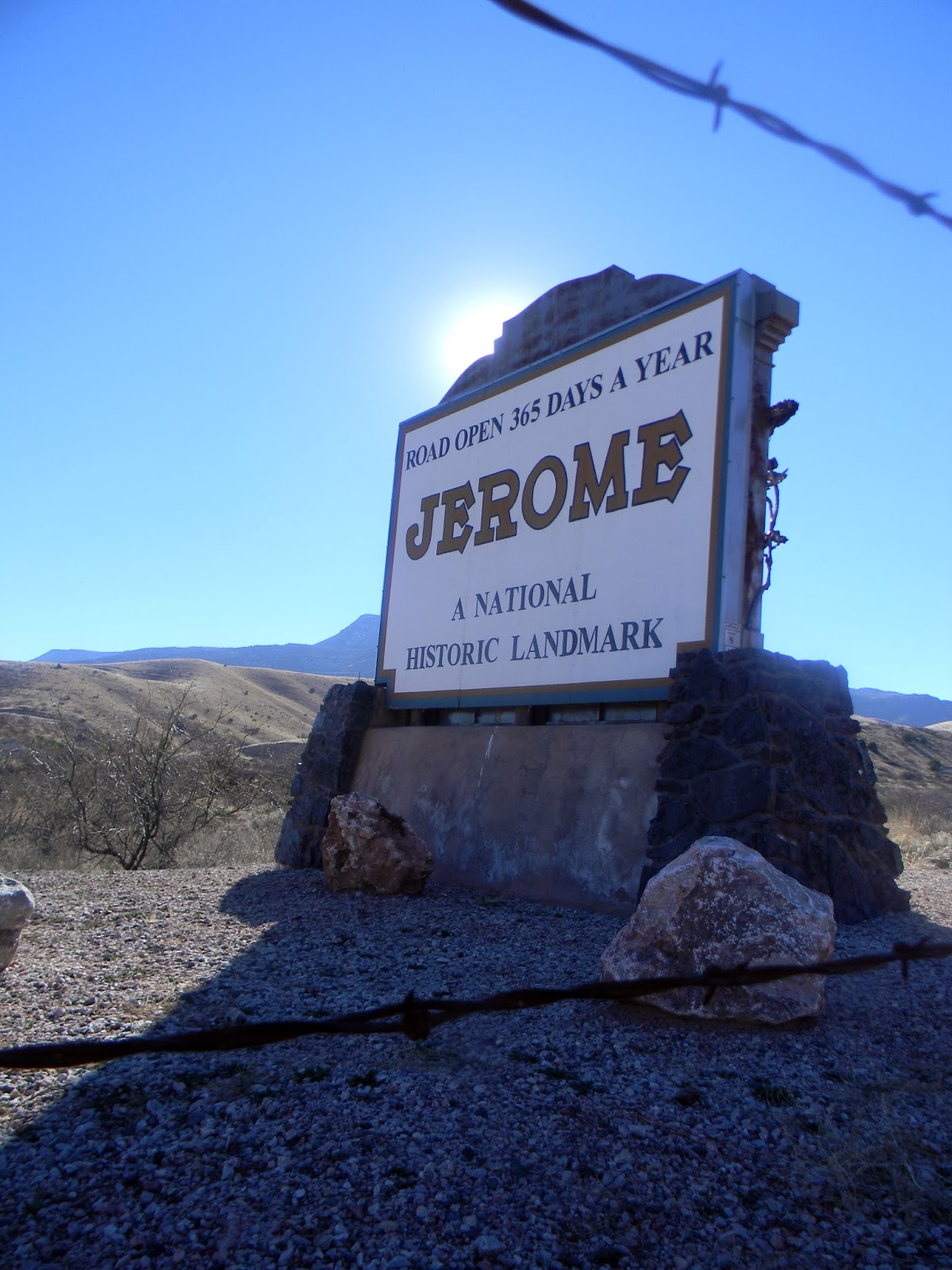 Back To The Bartlett Hotel 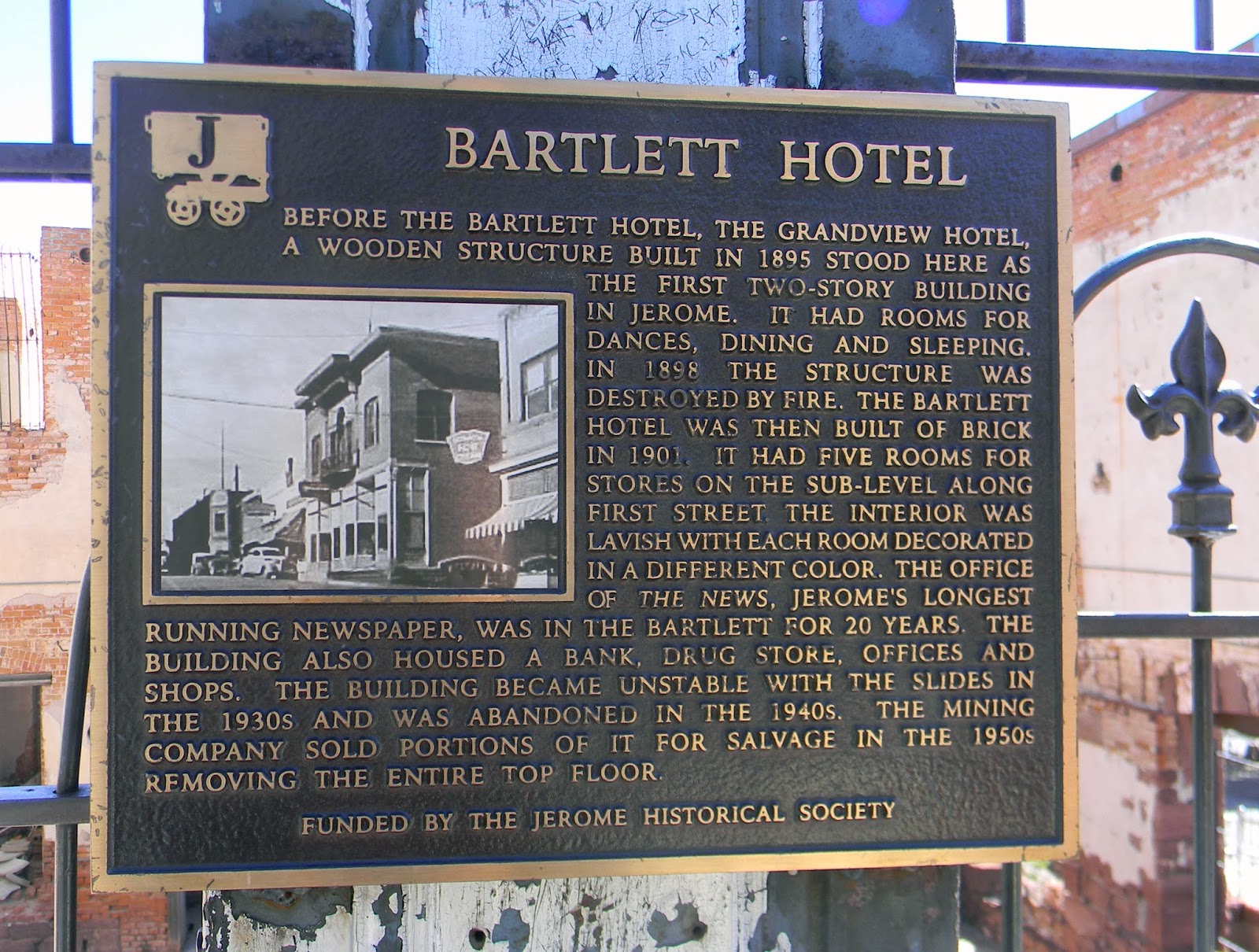 In 2011, my husband and I visited Jerome while staying in a resort in Sedona.  I took several pictures of the  Bartlett Hotel  on that visit.  When I went back to Jerome this month, I concentrated on taking photos of the side of this huge abandoned structure.  I wanted to see what was inside each of the arched passages.  This hotel is an amazing piece of art with broken and missing windows, and old painted signs on the walls.  I could spend several hours trying to photograph every inch of this historic site.
2 comments
Read more

Living On The Edge 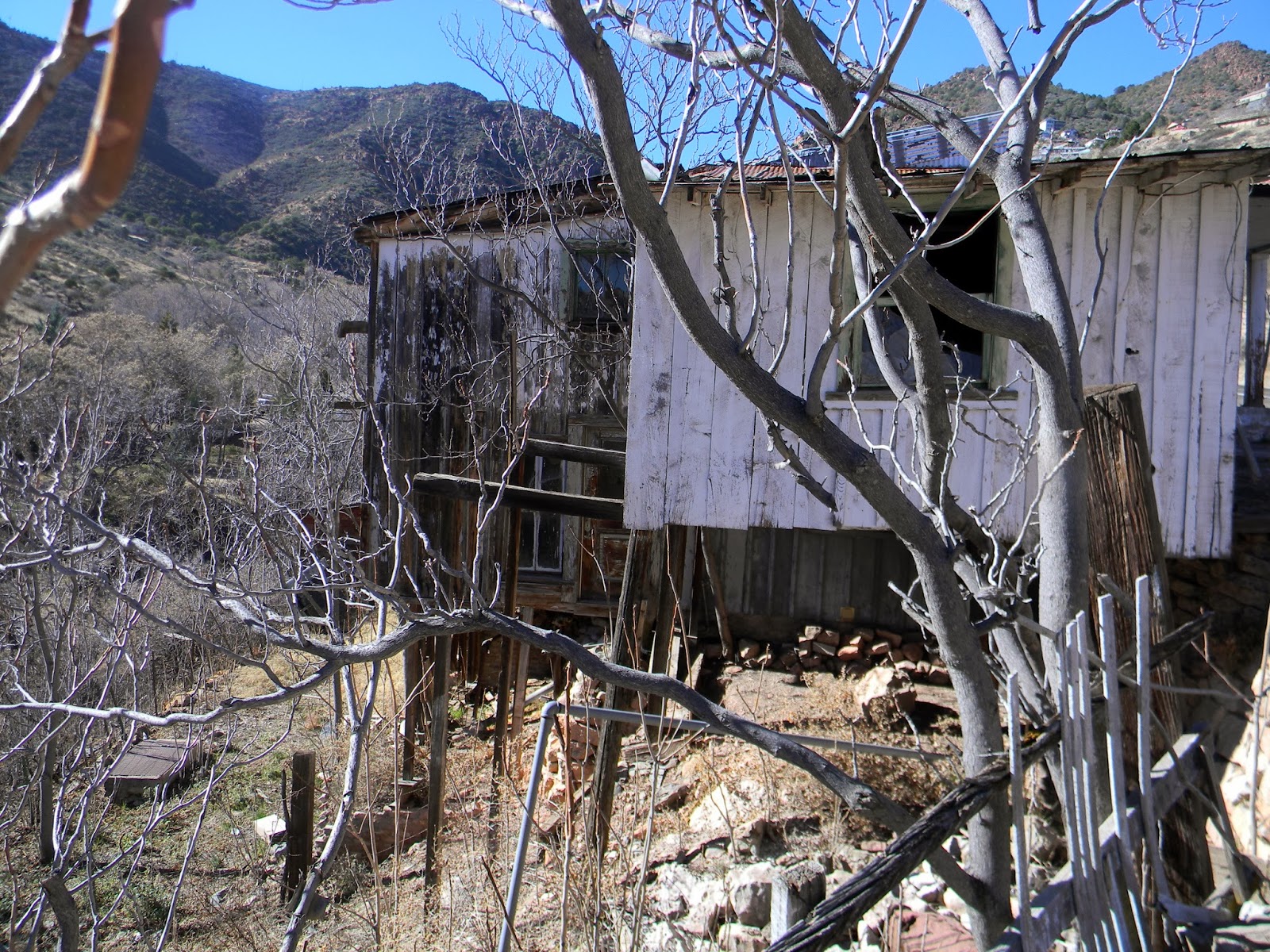 In Jerome, AZ, many of the residents are literally living on the edge.  Some of them have businesses along the winding narrow road through town, and behind them built on the side of the mountain, is their living quarters.  Some of the houses are fairly new, while others are historic and have been refurbish.
Post a Comment
Read more 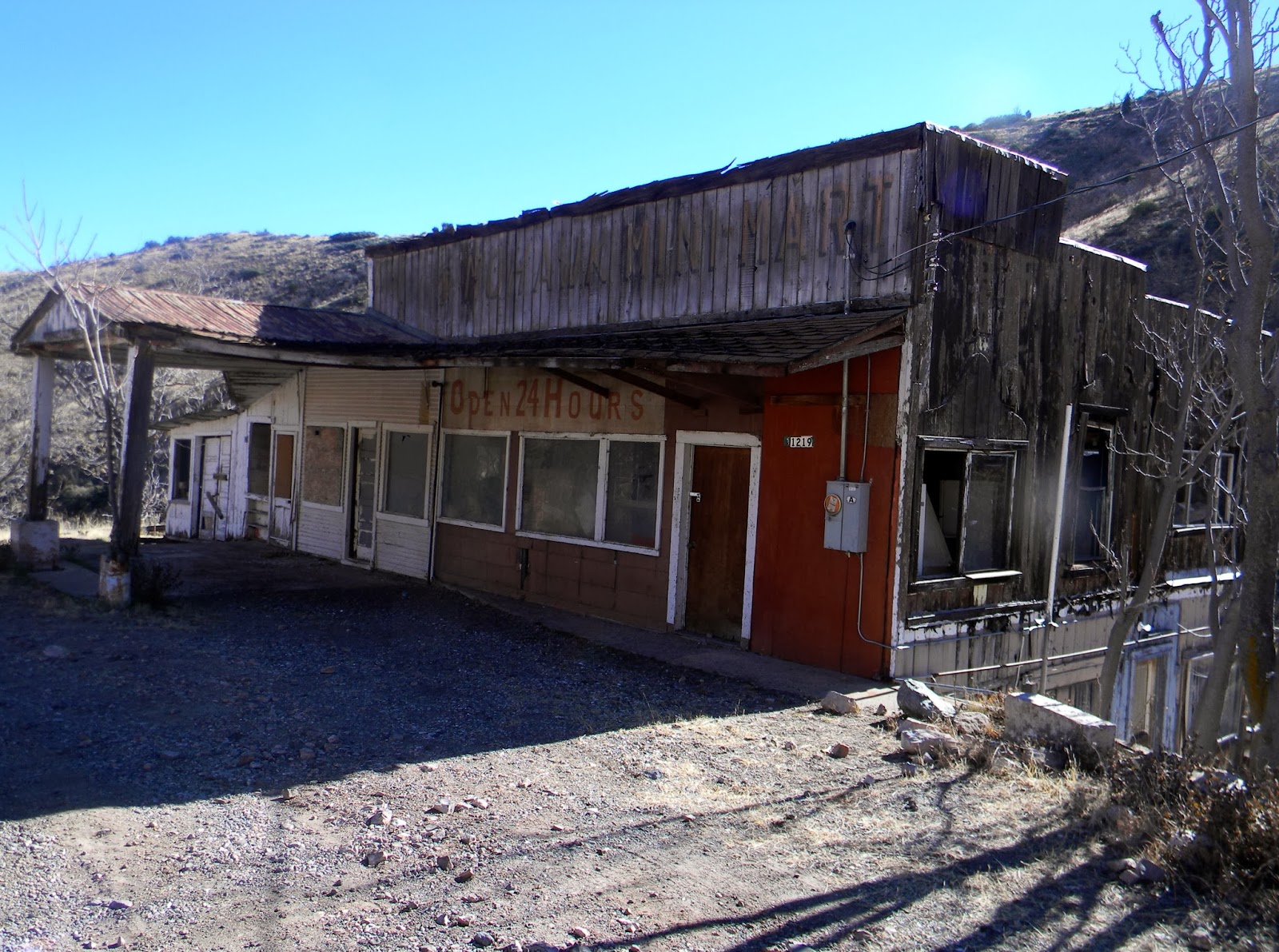 From Phoenix you travel north on Interstate 17 until you get to Camp Verde.  You then take the 260 highway through Cottonwood on your way to Jerome.  On highway 89A, right before you take a sharp turn up to Jerome, sits an abandoned building.  On the front are some faded words, Mohawk Mini Mart, letting you know what the old abandoned building used to be.  On one side, you will note that it is being held up by four wood posts.  The other side shows that the bottom level is built along the side of the hill.  Inside of the room hanging on the ledge is dusty old furniture piled all over the room.  I am sure that many years ago this mini mart was the place to grab a snack before or after visiting Jerome.
2 comments
Read more
More posts