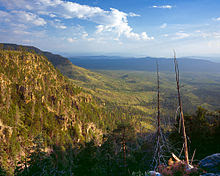 He is known all over the world as different names, and has slightly different descriptions.  The hairy beast called Bigfoot, Sasquatch, Skunk Monster, or Yeti, just to name a few, has been seen by many but very little is known about this ape-like creature.

In Arizona, we have many sightings along the rim country stretching from Prescott to Williams, Winslow to the Herber area, and into Payson.  (This is where the Finding Bigfoot team went hunting for Bigfoot.)  It got its name from the many sightings along the Mogollon Rim.  People have describe what they saw as around seven feet tall, hairless in the face, but with its body covered with hair.  The hair has been noted as being dark or reddish brown.  This creature has enormous strides when it walks and runs, leaving footprints that have measured around twenty-two inches. Those who had an encounter while in the forest have said there was a dead silence, and a foul odor right before seeing the Mogollon monster.  Some claim they didn't see it but smelt the stench, heard branches breaking, and knew something was watching them.

One of the first known encounters was in the mid 1940s by a cryptozoologist, Don Davis, who was thirteen years old at the time and camping with his fellow Scouts near Tonto Creek.  It was late in the night when he was awoken by something or someone rummaging though their things.  Davis yelled out thinking it was one of the scouts and a huge, dark figure approached his tent and stood near him.  He describes his encounter like this:

There have been stories of people running into the beast before Davis' encounter.  In 1903, a visitor to Arizona tells a story about seeing what he called as "a wild man of the rocks" while hiking the Grand Canyon.  He said this "wild man" had long white hair, matted beard, and his fingers resembled claws.  This is not the typical description of a Bigfoot, but some concluded that the visitor might have come across an older Sasquatch.  One will never know for sure.