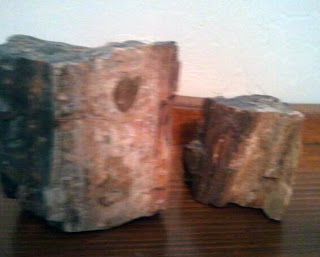 In northeastern Arizona and in the heart of Navajo and Apache country lies the Petrified Forest National Park.  This over 146 square miles of desert/forest land is partially in the Painted Desert and got its names from the large deposits of petrified wood which covers the area.  In 1906, the site was declared a national monument and in 1962 a national park.  Inside the park you will find over 400 different types of plant life along with 200 various species of birds and other animals.  Half the park is designated wilderness.

The Petrified Forest has many fossils of trees which existed around 225 million years ago.  The colorful sediment from the fossil logs are what give the Painted Desert its name.  the earliest human inhabitants lived in the are over 8,000 years ago.  About 6,000 years later, they were growing corn, building pit houses, and above-ground homes called pueblos.  The climates changes made it hard for the people to continue living in the area and eventually they all left for other places.  Over 600 archaeological sites with many petroglyphs were left behind tell their stories.  16th century Spanish explorers discovered the site and petroglyphs and by the mid-19th century a U.S. survey team discovered the petrified wood lying all over the area.  After roads and railways lead to where the park was located, there became a need to protect the petrified wood and fossils from the tourist stealing them.  It became a high priority because many were stolen from the park's grounds.  There is a rumor that the petrified wood is cursed and if you remove it from the park you will have nothing but bad luck.  Many pieces have been mailed and returned back to the park from people who believe the stolen wood is the reason for all their misfortune.