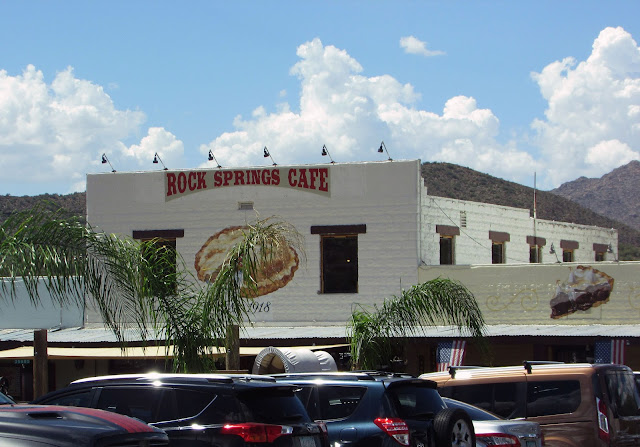 Rock Springs was once a camp for Indians and the Calvary.  It was “a watering hole for miners, cattle drives and sheepherders during the expansion of the American West territory from 1860 until 1917”. (From their website:  http://rocksprings.cafe)

In 1918, a man named Ben Warner, built a “canvas-covered” structure which stood as his store until the adobe block building was finished.  Ben did all the labor himself; transporting gas in 5 gallon cans for customers to purchase along with canvas bags for them to fill with water from the well he excavated.  For several years, the Rock provided the only telephone service for miles and had a post office for which Ben was the postmaster until 1955.

Today, even the old stagecoach lines are still visible behind the building.  It is the “oldest independently” owned food establishment still in service in the state of Arizona.  You can stop in the Rock Springs Café for a delicious down-home meal, and their world famous homemade pies.  Next time you are driving by Black Canyon City, take the exit off and visit the historic Rock Spring Café.

Not only can you get tasty pies at the cafe, but there seems to be some spirits hanging around as well.  Some say that the old general store, hotel, and stagecoach stopover is haunted by ghosts of the past.  Reports by the staff working the late shift claim that the saloon doors move on their own, and witnessed apparitions wandering around the place wearing old-west clothing.  Even those enjoying a nighttime meal or cocktail have seen chairs and furniture tossed about by unseen forces.  Also, the cooking staff have been spooked by the loud banging of the pots and pans by an unknown presence.  Perhaps, the ghosties of this establishment are a rowdy bunch of good ol' cowboys.