I know you heard of the Hatfields and McCoys, but what about the Grahams and Tewksburys?  Between the years 1882 and 1892, a heated battle was waged between two families who lived in Pleasant Valley, Arizona. The Tewksbury-Graham Feud was also referred to as the Tonto Basin Feud or Tonto Basin War and ended up involving more than just the two families.

The Grahams were ranchers who came to the United States from Northern Ireland in 1851.  Samuel Graham, his wife Jane and five kids made a home in Ohio.  Ten years after moving to Ohio, Jane passed away from an illness.  Sam ended up marrying a woman with seven children of her own, Mary E. Goetzman.  (Sort of a Yours, Mine and Ours family)  It was in 1881 that Sam's sons, John and Thomas, bought land in Arizona.  The Graham family was actually invited to stake a claim in the thriving lands of Arizona by Ed Tewksbury. 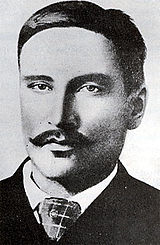 Edwin Tewksbury, or Ed as his friends called him, was born in San Francisco, CA in 1858.  His father was a miner and his mother was Native American.  He was their second son and had four siblings.  The family began as cattle ranchers and later added sheep to the mix.  They also owned several horses on their ranch.

Tom Graham and John D. Tewksbury were the best of friends, but over the years, that friendship soured.  They hurled nasty allegations that each family was stealing cattle and horses from one other.  If it wasn’t bad enough that the families were fighting, another rancher, James Stinson, decided to get into the action by tossing in his own claims that they were rustling his cattle too.  Stinson decided to include others in the battle such as men from the cattlemen associations, sheepmen, hired guns, cowboys, and Arizona lawmen.  With guns blazing, a huge war began.

The dispute went on for nearly a decade with most of the bloodshed between 1886 and 1887.  It was in 1892 when the last-known slaughter occurred when Tom Graham was killed in Tempe, Arizona.  This ended the feud for good.  Tom, in his dying breath, said that Ed Tweksbury shot him.  Ed went to trial twice, but never served any time.  Ed passed away in April of 1904 in Globe, Arizona.
The battle in Pleasant Valley had about 35 to 50 fatalities, and almost took out the entire male population between the two families.  This war is considered to have the largest number of civilian deaths reported in the history of the United States and known as one of the most “deadliest and well-known range wars”.  Because of this war and the continuing Apache Wars, Arizona’s statehood was postponed for a decade.

Many articles and books can be found about the battle.  Author Zane Grey wrote a book based on the feud, entitled "To The Last Man; A Story of the Pleasant Valley War".  Countless graves of those slain in the war can be found in the Young, AZ cemetery.  The Perkins Store where John Graham was killed, still remains and is now a museum.