Home at the Slaughterhouse 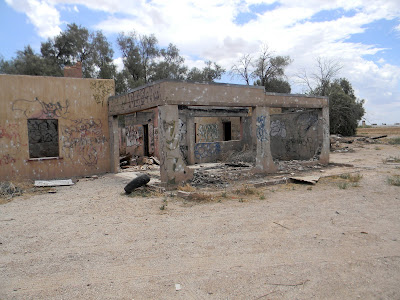 Yep, it has happen, the squatter at the slaughterhouse is there to stay.  The first time we visited this house and nearby barn was in July of 2011.  It was around 114 degrees and we were met by a nice family who lived in Casa Grande and followed my  Southwest Abandoned Places Facebook page.  The place was empty and tagged by graffiti vandals.  We threw rocks in each room hoping not to run into a snake or scorpion.  We were met with many bees who occupied the only room which had a roof.  We took lots of pictures of the house and barn, then jumped in the car and drank lots of water before leaving. 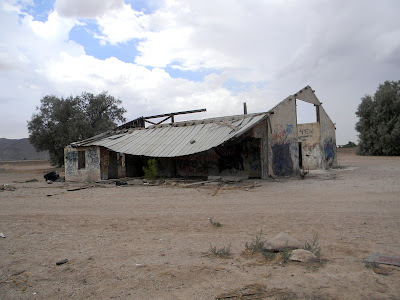 The second time we went there was in February 2012.  We thought since the weather was much cooler, we would be able to take lots more pictures.  What we didn't expect was a squatter.  When we drove into the dirt driveway, we noticed a man working on his truck and his dog lying right beside him.  The man never looked up at us but the dog was staring us down.  Sharon just turned her car around so we could make a hasty exit.  As she did that, we noticed a make-shift tent hanging on the large trees near the barn and another dog lying by that.  This dog had his eyes on us too.  We were sad that we couldn't take pictures that day. 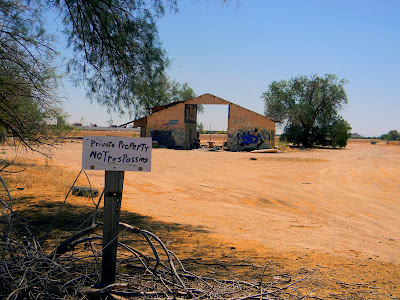 We did cruised back by the place in May and there was a sign at the entrance which said, "Private Property, No Trespassing".  The sign was hand made but we still didn't want to mess with whoever was there even though the place looked abandoned.

Once again, we took a trip back to Casa Grande in November of this year.  We wanted to revisit all the places we saw a on earlier road trips to see if there were any changes. Of course, we had to check out the slaughterhouse just in case no one was there and we could get more pictures.  The first thing we notice was the sign lying on the ground. As we turned into the drive and immediately noticed a flag with a skull and cross bones, flying on the top of the barn.  The place looked as if it was being lived in.  The second story of the barn had a homemade bedroom.  As we turned the car around to leave, a man came out and gave us a nasty gesture as if to say, "Get the hell out of here!" and we did.  I am not sure if we will be able to photograph this place again, but every time we are in Casa Grande, we will cruise by to check it out. 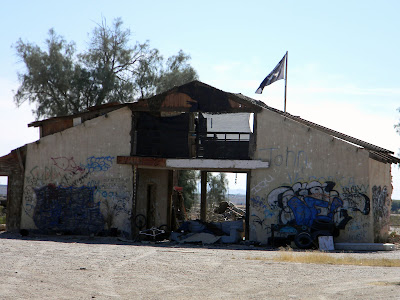 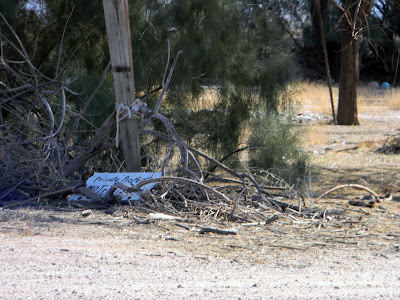