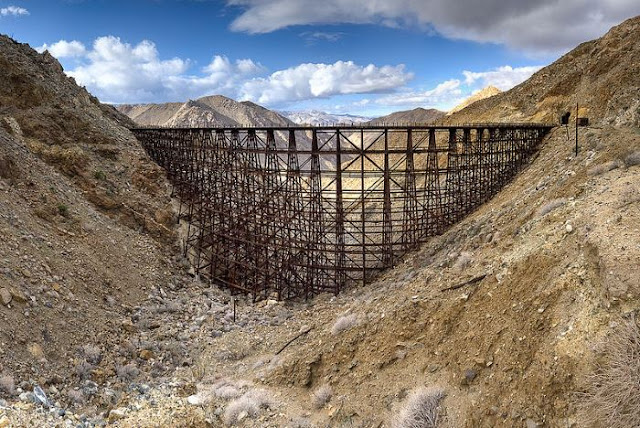 Parts of California are like Arizona with the harsh weather, poisonous critters, and sandy grounds.  In the early 1900’s, San Diego was looking for a faster way to travel to the lively town of El Centro which was the most prevalent settlement in Imperial County.  Along with the other features of Anza-Borrego Desert, stands a massive bridge which extends across the Carrizo Gorge.  The railway passage was named the Goat Canyon Trestle but denoted “The Impossible Railroad” by many naysayers.  By 1919, the insufferable railroad was finished and ready for use.


It wasn’t an easy task to operate through the assemblage of 17 tunnels and 14 key trestles arching within the Goat Canyon in Carrizo Gorge.  The final length was 11 miles and it took 12 years to finish.  The massive viaduct was 200 feet tall, loved by railroad fanatics, and a huge achievement.  Alas, the immense structure couldn’t withstand the brutal winds of hurricane Kathleen.  She tore through that gorge crumpling tunnels and destroying trestles.  After careful examination, Southern Pacific Railroad thought it would be best to shut it down and leave the line abandoned.
Today, the immense giant sits alone in the canyon and has become a place for hikers, mountain bikers and those train loving people take the 12 mile hike to admire the 750 foot wooden spectacle.
abandoned bridge desert historical trains