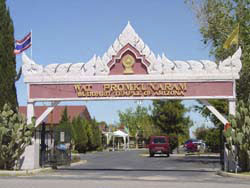 There have been many bizarre murders in and around the City of Phoenix, but the killing of six Buddhist monks was extremely shocking. Even though the killings were horrible, it was the manner to which they were murdered that was the most appalling. On Saturday, August 10, 1991, during the scorching summer, nine people, which included six Buddhist monks, a nun and two acolytes, were found shot to death at the Wat Promkunaram Buddhist temple in the far west area of Phoenix. A temple member found the bodies lying side by side in what appeared to be an execution-style killing. The homicides were label the largest mass slaying in Maricopa County’s history.

Among the fatalities was a 71 year old num, Foy Sripanpiaserf, who was the grandmother of the youngest murder victim, Matthew Miller. Miller was 16 years old, a novice monk, and a high school student. Some of the other victims included a high priest and a 21 year old acolyte. Authorities said that there were no signs of struggle or resistance. Only two small rooms appeared to have been disheveled with the temple area and main rooms looking as if they were untouched, leaving no motive for the murders.

This is what the investigators found upon arrival of the crime scene: The bodies of all nine victims were found in the living room near a couch and still dressed in their saffron robes. The carpet underneath the bodies and their clothing was saturated in blood. They were arranged in a circular pattern and lying face down. They were all shot in the back of the head at close range, some at least three times. Their fingers were laced together behind their necks and from the way the bodies fell, it looked like they were praying and gave no resistance.

To get some sort of clues about who would commit such a heinous act of violence, they found some strange evidence in and around the crime scene. In the middle of the bodies was an ashtray filled with remains of a fire that appeared to be put out with a couple of extinguishers. The monks didn’t smoke so they figured that this act was just done out of shear sick pleasure. A pile of keys was found on a table, the word “bloods” was carved in a wall, shell casings from a 20-gauge shotgun, as well as more casings from other types of shot guns. They figured the keys were probably used to locate a safe and with more than one type of casing found at the crime scene, it would appear that more than one person enacted the killings.

Who would carry out this extremely violent crime on a group of monks in their temple while they were praying? On August 20th, during a standard traffic stop, the Luke Air Force Base officer noticed a rifle lying on the passenger side of a car driven by 17 year old Rolando Caratachea. Behind Caratachea’s car was another driven by 16 year old Jonathan Doody, who was of Thai descent, and was also pulled over for “suspicious activity.” The boys were stopped the next day but this time they were together in the same car. The officer inquired where the rifle was at and Caratachea said that it was in his car parked at Doody’s house. They found the rifle somewhat hidden and by law had to report it to the sheriff deputy. The boys were found to have no record so the rifle was returned back to them.

It would be a month later that the Office of Special Investigations heard about the incident and check police records and issued a warrant to take hold of the rifle. No assessment was done on the rifle right away. Instead it was put in evidence with about 80 other rifles that were also confiscated for testing. It wouldn’t be until October 24th when investigators got a break in the case. The weapon that was retrieved from Caratachea’s car, .22 caliber semiautomatic Marlin rifle, proved to be a match with the bullet casings found in the temple. Upon further examination of the place, they found a 20-gauge Stevens shotgun which match the casings, presenting the investigators both weapons. The search also turned up two knives, a camouflage hat, two facemasks, and gloves leading them to believe that the motive was robbery. Another theory for the murders was that it could have been some sick desire to play war that the boys decided to carry out.

In typical fashion, they made different statements about the killing, each saying that it was the other guy’s idea and they pulled the trigger, killing all nine victims. Doody acting all innocent said that it was a large gang he was with and was outside when all the shooting started. He didn’t know why they had all those weapons and thought there were at the temple as a “challenge” to beat the sensor alarm for the building. He went on to say that his family was in danger of being hurt by these men. A judge didn’t buy the stories and said that the boys would be tried as adults with the maximum penalty of death.


In 1993, Garcia decided to testify against Doody in exchange for a sentence of life in prison. Garcia pleaded guilty and explained the whole events of what happened on August 9, 1991. The intention was robbery because they heard rumors that the monks had a safe with lots of money, with guns, and cameras in their rooms. They figured that the monks would be an easy mark and wouldn’t put up a fight. They made a war game of it, wearing camouflage gear and carried assault rifles. They arrived at the temple around 10 and 10:30 pm, forcing them to kneel in a circle looking at each other, while they ransacked the place. Shortly afterwards, the nun came in and they had her to kneel down and be part of the group. For an hour they waited while the men vandalized the temple collecting over $2,500, cameras, and stereo equipment, but having no success discovering which key opened the safe. Garcia goes on to say that he wanted to go but it was Doody who didn’t want to leave anyone behind that can testify against them, and carved the word “Bloods” in the wall.

On July 12, 1993, Jonathan Doody was sentenced to 281 years in prison for his part in the murders. Garcia was sentenced to 271 which was the maximum punishment under the plea agreement. It was still unclear who actually pulled the trigger, but this senseless act of execution will still go down in Phoenix history as one of the largest mass murders to date. It makes you wonder if the spirits of these nine helpless people are still wandering around the Wat Promkunaram Buddhist Temple. I didn’t find any evidence of ghosts on the premises, but that doesn’t mean their spirits aren’t there.