Tombstone is famous for many things, mainly the Bird Cage Theatre and O.K. Corral. It is the lesser known places around town that have their own ghostly tales and are just as interesting. So dust off your boots and hang up your hat and listen to the stories of the ghosts of Tombstone’s boarding houses.

During its heyday, Tombstone was riddled with notorious gunslingers, businessmen, and miners. This male driven town had many soiled doves to entertain them that were working in the brothels and saloons around town. One of the more upscale, high class boarding houses was the Aztec House where anyone with money would plunk down plenty of gold coins to spend the night there. Mostly men stayed in the rooms and would usually entertain whores there.

Stories about ghostly activities inside and in front of the Aztec House have been reported by many eyewitnesses. A strong male presence has let itself be known that he doesn’t like any females that stay at the house making them feel so uncomfortable that they will usually end up leaving. A woman watching the house for the owner had her dog with her when strange things started to occur. She heard noises and saw lots of movement, dark shadows, and the doors in the kitchen opening by unseen forces. Needless to say, they did not spend the entire night at the house.

The outside of this present day antique shop has been visited by a mysterious apparition of a woman in white. She has been seen numerous times in front of the shop, perhaps driven there by the authentic items of her era on sale inside. There are many theories on why she is there and one is that she was an 1880’s brothel madam who was hung at the courthouse. Maybe this occurred outside the Aztec House and she is on the hunt for her executioners. Another story about the lady in white is that her child died of Yellow Fever and she killed herself on the steps of the Aztec House. She has been seen wandering the streets of Tombstone and always making a stop at the Aztec House.

San Jose Boarding House:
This boarding house was a favorite of Doc Holliday’s. He would lay his hat there while in Tombstone and during visits with his lady love, Big Nose Kate. Many wonder if Doc’s spirit is still hanging around because of the paranormal experiences that some have claimed happened to them especially in the room Doc liked to stay in. Some of the activity is of doors opening and shutting by themselves and the toilet keeps flushing for no apparent reason. One guest had several pictures taken of him and his lady friend while in that room. In all the pictures, she had a strange haze over her face and his face was clear. They moved positions and the haze was still over her face. There was no explanation for the unusual occurrence. An owner tells of a frightening experience that she had while in the house. One night she had trouble breathing as if she was being choked. She yelled the Father’s name loudly and right afterwards felt much better. 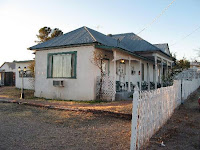 This adobe house was built in 1880 by Tombstone’s first bank manager and has a white picket fence outside. In the early 1930’s it was remodeled and enlarged giving more rooms to the boarding house. Its owners have many remarkable ghost stories to tell about their own personal experiences and what their guests lived through as well.

One story centers about Billy Clanton and the White Room. It is rumored that after the gunfight at the O.K. Corral, that the critically injured Billy was taken to the Barrows house and put in the White Room. Suffering in great pain and given medicine to calm him down, Billy eventually died when his heart stopped pumping. This is just one rumor because other stories have been told that Billy died right away from his wounds. Whatever the truth may be, many claimed to have seen Billy’s ghost in that room. Some people ask for the White Room and hope that Billy’s spirit will make an appearance to them. Other apparitions have been seen as well. A young blond-haired man and woman have been observed in the room with her begging the gentleman to not go near the window. The eyewitness felt several angry presences outside the room as if it was some sort of lynch mob.

The White Room isn’t the only place in the boarding house to have reported ghostly activity. The Green Room seems to be where people have experienced vivid dreams. Two women staying in that room weeks apart had the exact same intensive dream. Both reported seeing a young woman in Victorian clothing and a man in a hat walking through their room, out the door, and into a garden with climbing roses on a trellis.

In the Gold Room, producers of the movie, Ghosts of Tombstone, stayed in that room and reported hearing footsteps as if someone was walking around the room all night. They never saw anyone and couldn’t explain the strange phenomenon.

In the main house guests have reported seeing two ghosts, a mother and daughter, polishing the furniture. Apparently in afterlife they still care how the place looks.

Tombstone is a magnet for many ghost sightings even in its lesser known places. Stay a night and see who will visit you when the sun sets in this vast desert town.
ghosts haunted places hotels towns wild west