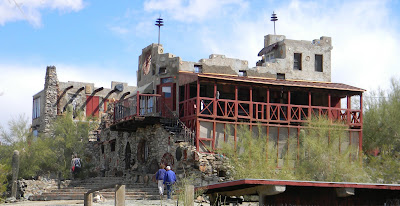 From the foothills of South Mountain an odd looking structure is seen perched above. We drove down a small dirt road to find a bit of a scattered parking lot. After parking between a rock and a cactus, we walked up the path towards the remarkable entrance.

One of the things you will take note of is the attention-grabbing way it looks somewhat like a castle, a fort, and cabin all rolled into one amazing structure. You can’t miss the long wood balcony, and the peculiarly placed turrets and parapets. The first thing you see is an old wooden wagon wheel built into a wall. You just know that this place is going to more than some boring tourist trap. 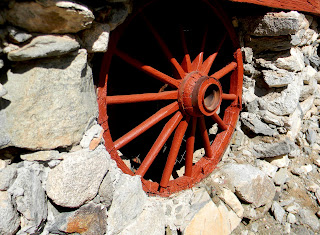 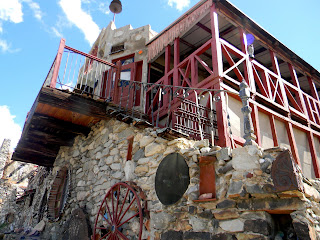 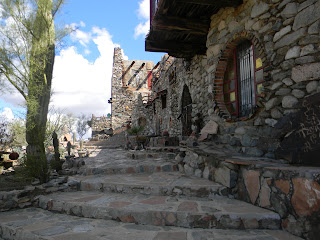 I have to say I was blown away by all the materials that were used to create this place known as “Mystery Castle”. We waited a few minutes before the guide whisked us upstairs for the tour. They started with the history of this rather unique place.

In 1930, Boyce Luther Gulley was diagnosed with tuberculosis, left his wife and daughter in Seattle, Washington, and headed southwest to Arizona. Selfishly, he never told them of the disease and disappeared without a trace. It would be 15 years before Mary Lou Gulley and her mother would find out what happen to their missing loved one. An Arizona lawyer sent them word that Boyce had passed away. Imagine their shock to find out that he had been living in Arizona this whole time when they assumed he was dead.

One of Mary Lou’s vague memories of her father was when she was a small child at the beach and making sand castles together. She asked him to build her a large castle that was strong and one she could live in. It would be many years later before she would see that promised fulfilled. He built the strange castle on the mountain near his mining claim with his little girl in mind.

As soon as Mary Lou and her Mother found out about the castle, they moved to Arizona to live there. According to her father’s will, they had to live in the castle at least three years. After the three years, they were able to open the trapdoor which had some interesting treasures hidden there. To their surprise, buried under the floorboards were two $500 bills, gold nuggets, and a Valentine’s Day card. Mary Lou was touched because she made the card for him when she was a little girl and he saved it all these years. It wasn’t long before she fell in love with her castle. She still lives in a small house behind the castle and gives tours during the time of year when the weather is cooler in Arizona.

Not only is the story of how this castle came about interesting, but all the unusual materials the castle was constructed from is out of the ordinary too. The castle is approximately 8,000 square feet with 18 rooms. These rooms consist of a caretaker’s quarters, a bar, a chapel, thirteen fireplaces, and a wishing well. He used river rock, recycled materials such as railroad ties, unused telephone poles, discarded metals, copper, various types of glass, old car parts and furniture from abandoned structures. When you visit the castle today, it still looks the same as the day that Boyce built it. 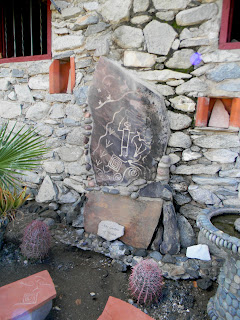 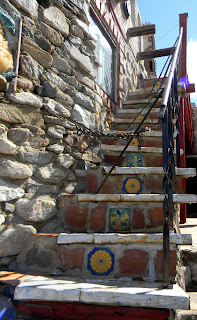 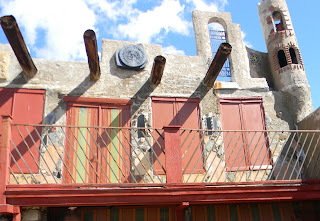 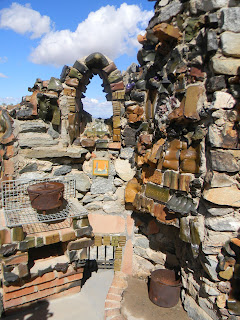 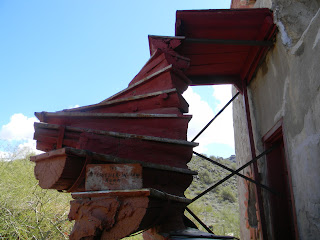 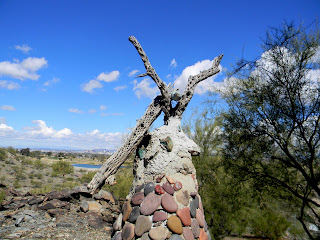 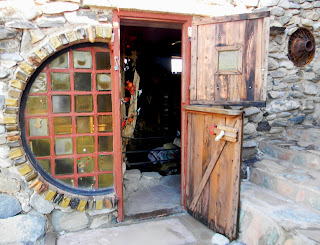 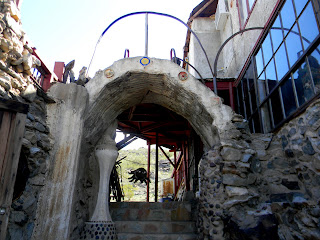 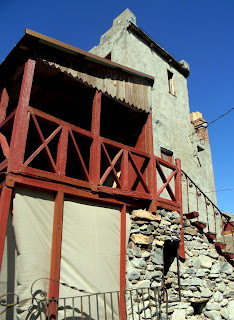 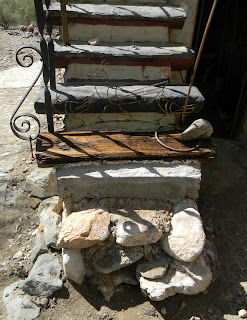 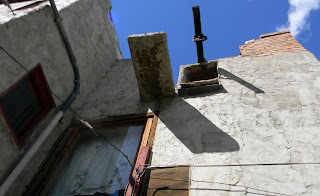 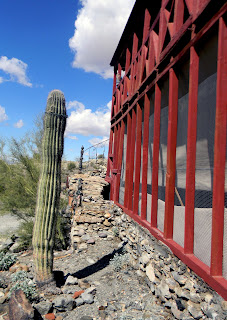 These are just outside pictures of the castle, I will show inside pictures on my next post.
bizarre building mountains mystery road trips