- October 03, 2012
In honor of Halloween I will be featuring some of the many haunted hotels in the state of Arizona.  This southwestern state features several places for those who don't mind sleeping with the ghosts.  The first place is the mining town of Bisbee.  I know this place and the Copper Queen Hotel very well.  I stayed there a couple of times and experienced paranormal activity.  This interesting little town has ghost sightings all over the place; in homes, businesses and even wandering the streets. 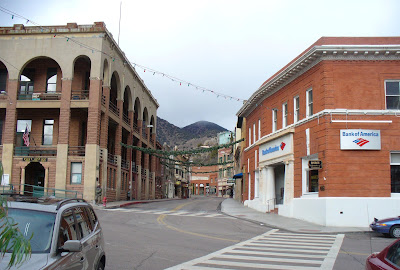 Bisbee:  In 1877, a civilian tracker named Jack Dunn lead army scouts into the Mule Mountains to look for rebellious Apaches. Instead of the Apache, they found signs of mineral deposits consisting of lead, copper, and even silver. The first mine to be staked later became Bisbee. Many claims that were filed lead to a lot of prospectors and on lookers running to Mule Mountain in hopes of striking it rich. Due to the many claim filings, the town of Bisbee became known as the “Queen of the Copper Camps”. Because of the growth and increase in population, they needed to meet the basic needs and services of all the people living there. On January 9, 1902, Bisbee became the City of Bisbee. By 1910, the city was the largest in the territory with a population of over 25,000 people.

By 1974 the ore reserves were dry which caused the closing of all mining operations in Bisbee. With cheap real estate and an extraordinary history, Bisbee attracted various types of people such as hippies, retirees, investors, or just tourists. There are many homes which sit high above the main street and have hundreds of concrete steps leading to their front doors. Some of the homes are empty and in disrepair but many have been restored by the residence who now call Bisbee home. The architecture and history of Bisbee has been refurbished and is kept well preserved. It’s the history and many stories of seeing ghosts is what keeps this small mining town surviving throughout all the hardships. 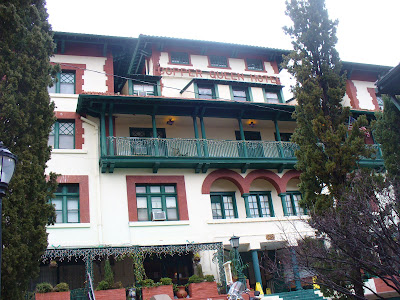 I did several posts on this place.  I stayed there twice with friends and we had lots of experience there.  The first time we stayed in room 401 and had things move, heard strange noises, and heard whispering above our bed.  In room 402 there were lots of strange sounds and we had money slide off the dresser by unseen forces.  On the streets my son caught an unusual picture of something or someone walking in the photo near a lighted staircase.  I tried to debunk the photo on my next visit but could not.


Our second visit to Bisbee and the Copper Queen Hotel was even more eventful.  I don't know if the snowy/rainy weather had something to do with it, but we experienced lots of activity.  I broke up that visit in four separate posts.  Here are the links:  part one-the arrival, part two-the cemetery, part three-the darkness, and part four-bedtime.  If you plan a trip to Bisbee, the Copper Queen Hotel get two thumbs up from me as a creepy place to stay and try to sleep with the ghosties.

Here are more hotels found in Bisbee and reported to be haunted:

Bisbee Inn, Hotel La More:  "Built in 1916 by S.P. Bedford, the substantial 24-room hotel was leased to Mrs. Kate La More just one year later. Over the years, the old hotel changed hands a number of times until it was fully renovated in the 1980’s and again in 1996. Today, the spirit of an old woman is said to lurk about the hotel, especially in Room 13." (www.legendsofamerica.com)

Bisbee Grand Hotel:  "Constructed in 1906, the hotel originally was called home to traveling mining executives. In the late 1980’s the entire hotel was closed and renovated to become the elegant Victorian hotel that it is today. Travelers visiting experience rooms and suites appointed with antiques and family heirlooms. They might also experience a couple of resident ghosts. Known as quiet ghosts, a male spirit has often been spied downstairs, while a female is seen on the upper level. But, of these ghosts, all they do is show themselves as they are not known to make a racket or move things around like some many apparitions that tend to lurk about hotels." (www.legendsofamerica.com)

Clawson House Inn: "This former mansion, turned guest inn, has been standing in historic Bisbee since its copper mining heydays. Built by Spencer Clawson, a mine manager in 1895, the inn is said to continue to be haunted by his wife. Also lurking about are the spirits of three miners who were murdered in the late 1890’s. It was during this time that a labor dispute erupted between the miners and the Queen Mine. Outside "scabs” were brought in by the mining company to cross the picket lines. Three of these men who were bunking at the Clawson House were killed by the strikers."  (www.legendsofamerica.com) 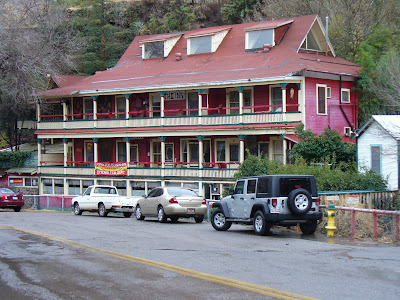 Oliver House (Since I did this post there have been some discrepancies on the murders in this establishment. I have heard several different stories and still looking for the truth.  The one I wrote about is the story which has been circulating around for years.  I do believe that the Ghost Adventures boys did an investigation there this season and I am curious to see what story was told to them.) 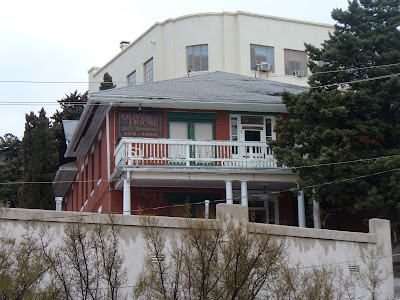