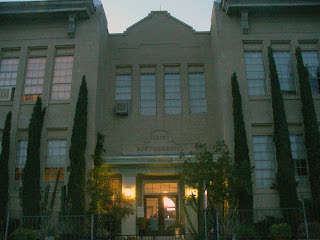 Sharon and I stayed at the Noftsger twice with friends and had interesting experiences.  We experiences hearing a little girl, unexplained noises, weird EMF readings, strange EVPs and a Barbie doll sitting on the chalk board moved.  We are hoping to give this place another try next month.  If we do, I will post any strange occurances.  (Pictures from inside)

On January 14, 1905 and only 20 feet from the edge of the south rim of the Grand Canyon sits the El Tovar Hotel.  The building was constructed of logs and stones by the Fred Harvey Company.  It was an extraordinary place in its heyday where many prominent people like to stay.  The parking lot is a U-shape with a grave of a former Harvey girl who died many years ago.

The spirit of a black caped figure has often been seen walking along the pathway leading from the El Tovar Hotel, passing by the grave, and then disappearing behind the Hopi House.  The ghost of Fred Harvey, himself, has been seen on the third floor during the holiday season inviting guests to the annual Christmas gathering.  Allegedly, the third floor and the kitchen are the most haunted places at the hotel. (http://www.legendsofamerica.com)