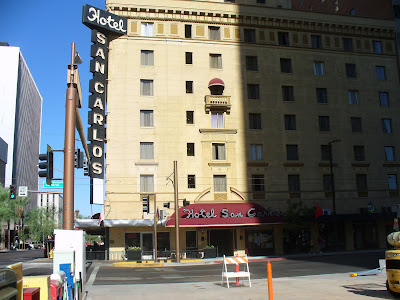 Construction was done by 1927 on the Hotel San Carlos in downtown Phoenix.  It had the look and feel of an Italian Renaissance place and was the hip place to stay at the times in all of the Southwest.  Each room on of this seven-story hotel was equipped with air-conditioning which was a rare thing in that era.  Many high society people, celebrities, and politicians stayed in the luxurious rooms.  The hotel was built where an elementary school once stood.  Guests and employees have reported seeing young boys running around the halls, playing in the rooms, and in the basement.  The story is told that some of those boys may have falling to their deaths in the well which sits in the basement of the hotel.  Another ghost seen by many is that of Leone Jensen who in 1928 died after jumping off the roof.  A white, ghostly female shaped figure has been seen in the stairwell and halls.  This spirit is often accompanied by a creepy moaning. 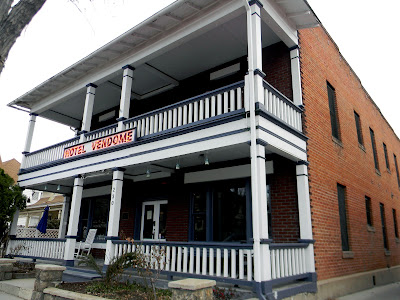 
The hotel had many owners throughout the years, but none as well known as Abby Byr. Abby moved to Prescott to seek treatment for Consumption. While there she met Mr. Byr and fell in love. They soon were married and in 1921 bought the Hotel Vendome. They ran the hotel until the unpaid taxes forced them to sell. The new owners were kind people and allowed the Byrs to stay in room 16 located on the second floor. Abby and her husband continued to manage the hotel for them. 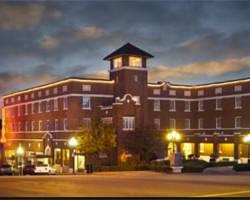 The Hassyampa Inn opened its door in 1927 and became one of Prescott's finest hotels.  The hotel was besieged with ghost stories from the moment it started excepting guests.  A young couple on their honeymoon was one of the first guests and stayed in the balcony suite.  The groom mysteriously disappear when he left to buy a pack of cigarettes.  His bride waited for three days for him to returned and became depressed and feeling jilted   She strung a rope on the bell tower and hung herself.  Many have reported seeing her ghost, known as Faith, still waiting for her husband, sitting on the end of the bed in the room they stayed in, holding flowers while crying.  Sometimes, guests and employees have seen her floating in the hallways in a pink gown.  Witnesses say she seems to like to play pranks by shutting off the gas burners in the kitchen, spilling coffee, and moving bed sheets.  A child is also seen at the hotel and a ball can be heard bouncing in several areas.

This B&B is an adobe building and constructed in 1880 by George Buford, a mine owner.  Before becoming a B&B it once housed two sheriffs, a mayor, a state senator, and also John Wayne.  Today, there are reports of ghosts such as that of a young man who committed suicide after being rejected.  The owners have seen him inside the house and believe he is the one ringing their doorbell late at night.  Guests have claimed to hear knocking on the walls, faucets turning themselves on and off, and unexplained lights in the rooms.  Women have told stories of having their hair pulled or stroke the back of their necks.