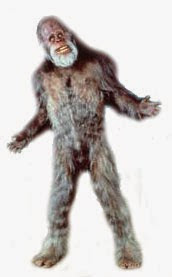 Like many of the states, Arizona has had its share of Bigfoot sightings.  A couple years ago, Sharon and I went to a taping of the show Finding Bigfoot in Payson, AZ.  It was interesting to see behind the scenes, but the Bigfoot stories were incredible.  Many were seen in the Payson area, but there have been sightings noted all over the state.  Here are some just in case you wanted to look for Bigfoot in Arizona.

The White Tanks Bigfoot
A few miles west of Phoenix are the White Tanks where a few Bigfoot sightings have been made. Now, along with the coyotes, snakes, scorpions and other desert critters, we have a Bigfoot too.

Here is just one story I found:  “It was back in 1993 or 1994 when three high school boys decided to take a late night drive in the desert. They ended up on the dirt roads of the White Tanks Mountains near the park entrance to take a break. It must have been around 11:00 pm when they began hearing lots of commotion amongst the bushes. They blew it off as being a small animal, perhaps a rabbit. The movement continued which had one of the boys scratching his head. He told his friends that he had been hunting all his life and never experienced any animal circling him in the woods, even more so in the desert. The three boys started to get nervous and scared. They jumped out of the jeep with flashlights in hand shining them into the dark desert. As the noise got closer in front of their vehicle, the flashlights brightness caught a large erect animal standing behind a 6 foot tall Creosote bush. The creature was still moving, and looked at them as it emerged from behind the bush. With only two strides, it crossed the road and disappeared in the darkness of the desert. The three boys were not sure exactly what they saw but they all describe the animal as being 7-8 feet tall, walking on two legs, massive shoulders with two-toned tan and brown hair. The hair on the creature was nothing like a dog or bear’s fur and looked to be thin, approximately 3-4 inches long. It appeared to not have a neck or it was just too short to notice one. After watching shows featuring Bigfoot and seeing renditions, they all came to the conclusion that they witnessed seeing a Bigfoot.”

The Mogollon Monster
In Arizona, we have many sightings along the rim country stretching from Prescott to Williams, Winslow to the Herber area, and into Payson.  It got its name from the many sightings along the Mogollon Rim.  People have describe what they saw as around seven feet tall, hairless in the face, but with its body covered with hair.  The hair has been noted as being dark or reddish brown.  This creature has enormous strides when it walks and runs, leaving footprints that have measured around twenty-two inches. Those who had an encounter while in the forest have said there were just dead silence and a foul odor right before seeing the Mogollon monster.  Some claim they didn't see it but smelt the stench, heard branches breaking, and knew something was watching them.

One of the first known encounters was in the mid-1940s by a cryptozoologist, Don Davis, who was thirteen years old at the time and camping with his fellow Scouts near Tonto Creek.  It was late in the night when he was awoken by something or someone rummaging through their things.  Davis yelled out thinking it was one of the scouts and a huge, dark figure approached his tent and stood near him.  He describes his encounter like this:

The White Mountains
One of Arizona’s most beautiful areas is the White Mountains in the north eastern part of the state.  Many escape the blistering heat of Phoenix in the summer to cool off in the lakes, streams, and forest of the White Mountains.  My family and I have been there many times camping and have always enjoyed it. But inside the pine trees and babbling brooks holds many mysteries.

While in search of Bigfoot, investigators have found footprints, hair samples, and other unusual information in an area where a sighting was reported.  The hair and plant samples were sent to a lab for analysis where it was concluded that the hair was “non-human animal origin”.  The cast of the footprint became famous and known as the “Skookam Cast”.  In the Diamond Creek area more unusual footprints were also found.   They were not as pronounced in shape as the “Skookam Cast” but enough to say they were worth looking at and doing castings of the images.   In the surrounding areas, many have reported seeing a large, black, hairy, man-like creature standing in the pines.  Only some have come in contact, but most of the reports are of sightings of the creature just standing or moving amongst the trees.  There have also been numerous reports and sightings from the White Mountain Apache law enforcement.  Most have seen a large hairy man-like bipedal creature in the woods while making their rounds.

Prescott
In the pines of Prescott many have reported not only seeing a large hairy creature, but have heard loud eerie screams, whoops, and wood knocking.  One farmer tells a story about his 10 year old pit-bull/shepherd mix disappearing one day without a trace.  This dog never left the property, so he became worried.  A few days later, his son found the dogs remains 14 feet up in a pine tree.  Its neck had been snapped and there were no signs that a bear or mountain lion could have been responsible.  It appeared that the dog was just tossed up into the tree.  They could not explain what happened.  Shortly after that incident, he noticed sheep and rams had gone missing.  After hearing stories of Bigfoot creatures being seen in the area, he wondered if that is what killed his animals.  This is just one of many stories people have reported about witnessing a Bigfoot in the Prescott area.

When Sharon and I took the back highway, Highway 89A, from Wickenburg to Prescott, we had an interesting experience.  While on the road in the forest area, three deer ran across the highway right in front of us.  They were hauling ass as if something was chasing them.  Many of our friends wondered if a Bigfoot was chasing them because that area was a hotbed of Bigfoot sightings.  We will never know because we didn’t stop to check it out.

Flagstaff
With all the tall and thick blanket of Ponderosa Pine trees, it is not surprising that people have witnessed and reported seeing a Bigfoot in the area.  Sharon and I stayed in a cabin near Lake Mary just outside of Flagstaff to conduct a Bigfoot investigation.  We brought along a couple of friends and my husband.  We took a nighttime hike in the dark woods but never seen or heard anything that could indicate a Bigfoot was present.  It was very creepy and we felt like someone or something was watching us.  That was a fun experience.

There are many stories of people hunting in the woods and coming across broken branches, branches bent to form a shelter, weird symbols made from branches, and a very pungent smell.  Some have seen a tall hairy bipedal creature running through the woods or watching them from behind trees.  Some have reported large rocks being thrown at them.  Lots of people love hiking the woods, but after witnessing a Bigfoot, they will not enter the forest again.

Grand Canyon
You are probably thinking, the Grand Canyon, but why not?  For many years the story of the “Wild Man” has be circulating around the area.  He was first seen in 1903, but some say he is just an Urban Legend.  Although they may have rejected the Wild Man as being a Bigfoot, there have been countless stories of people seeing a Bigfoot in or around the Grand Canyon.   Large hairy man-like creatures have been seen walking throughout the trees or just standing and watching the people in the area.  Some have reported capturing a Bigfoot on video, but hard to say what they caught.  Here are a couple of videos I found on YouTube.  You can judge for yourself.