Yep, It Was Filmed in Arizona 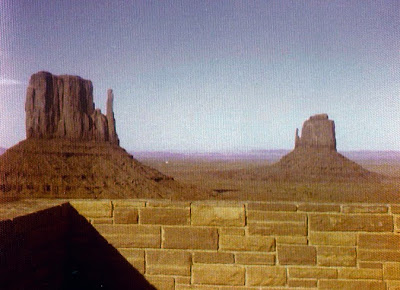 With its many different scenery throughout the state and liberal tax breaks, Arizona is the perfect place to film a movie.  Even in the 2006 movie “Little Miss Sunshine” featured Arizona’s Carefree Highway and mentioned Scottsdale.  The opening runs of the movie Psycho highlighted downtown Phoenix.  Here are just some of the movies that were filmed throughout Arizona:

In the 1989 movie, Bill & Ted’s Excellent Adventure, the boys lived in the city of San Dimas, CA, but in reality they were in Arizona.  They filmed in and around Coronado High School in Scottsdale as well as Metrocenter Mall and Golfland Sunsplash in Mesa where Napoleon had a blast riding the slides.

When giant spiders attacked the town of Prosperity, AZ, they were really running amuck in Superior in the 2002 movie Eight Legged Freaks.  While David Arquette and others were running for cover, the spiders can be seen crawling all over the historic buildings in this small town.  Also, the Valley West Mall in Glendale was set to be demoed so why not let them blow it up in a movie.

Downtown Phoenix didn’t fare well in the 1978 movie A Fire in the Sky.  Richard Crenna starred in this movie where a comet could be seen racing towards the city and destroying all the buildings.  You can see the Hyatt Regency and its round restaurant on top come crashing down.

In the 1990 movie The Grifters, starring John Cusack and Anjelica Huston, the old Phoenix City Hall was used as a police station.

In the 1968 version of the Planet of the Apes, it appeals that Charlton Heston and his men’s spacecraft came to settle on an unknown planet.  In reality, they came to rest in Lake Powell.  Other places such as Glen Canyon near Page were used as another area on this mysterious planet.

“Show me the money” is the famous line uttered by Cuba Gooding Jr. in the 1996 movie Jerry Maguire.  The movie featured Arizona State University’s football stadium, Sun Devil Stadium.  They used the stadium for the Arizona Cardinal’s playing field.

The Kingdom was a 2007 film which featured areas along the 101 Highway.  The area has the look of being in Saudi Arabia.  I remember them closing down the highway to film this movie.

The 1988 movie Midnight Run was an unappreciated comedy starring Robert De Niro and Charles Grodin.  They were both funny as a bounty hunter (De Niro) protecting a former mob accountant (Grodin) driving cross country while experiencing a misadventure.  Many of the scenes were filmed in Flagstaff, Globe, Cottonwood and the upper Salt River Canyon.

Raising Arizona was a quirky 1987 movie which starred Nicolas Cage and Holly Hunter.  When a young couple a faced with the reality that they can’t have children, they hatch a plan to take one of the “Arizona Quints”.  These boys are sons of bigtime furniture tycoon whose name is Nathan Arizona.  Many of the scenes were filmed with the Superstition Mountains, Camelback Mountain and Sun Devil Stadium in the background.

It may appear that Gilbert and Lewis in the 1984 movie Revenge of the Nerds attended Adams College, in reality they were at the University of Arizona.  Many areas around the campus were used as dorms, the gym, Cochise Hall and Greek Row.

When best friends, Thelma & Louise (1991), went on the run to Mexico in their awesome 1966 Ford Thunderbird, they drove through many parts of Arizona.  As we all know, the movie ended when they directed the car into the Grand Canyon to avoid getting caught.

Of course many westerns were filmed in the state including the 1993 movie Tombstone.  This movie starred Kurt Russell as Wyatt Earp and an incredible performance by Val Kilmer as Doc Holliday.  Even though the town of Tombstone exists, the movie was filmed at the Old Tucson Studios.

In the 1983 movie Vacation with Chevy Chase, his character, Clark Griswalt takes his family across country on a trip to Wally World.  Things don’t go smoothly as you can imagine.  Some of the scenes were filmed in Arizona including a stop at the Grand Canyon.

There have been numerous more movie filmed in my state of Arizona and I am hoping there will be countless more.
movies videos