Who is Buried in the Mesa Cemetery? 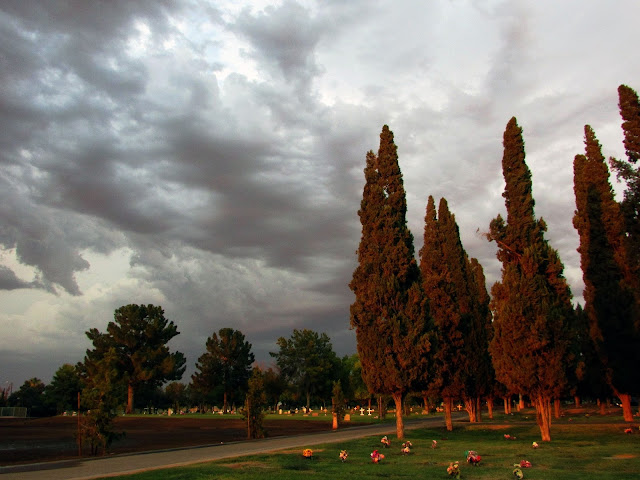 Sharon and I went to the Mesa Cemetery to photograph the old headstones and unique statues.  We were excited to see the skies getting dark because it really enhances cemetery photos.  We were putting flowers on a friend's parents grave when a guy asked us, "are you getting poked?"  What the heck was he talking about.  We just had to ask.  Apparently many Pokemon players have gone to this particular cemetery to play the game and have battles.  He saw as many as forty cars there at one time playing the game.  We said "no" and told him why we were there.  He handed us a Walking Tour Guide map of all the notable people buried in the cemetery.  The only person who was not mentioned on the map was Waylon Jennings.  His wife did not want him to be included.  He did show us where the legendary country and western singer was buried.  It was awesome to run into this man and see who are buried under the dirt in the Mesa Cemetery.  BTW, on an interesting note, he told us that in June when the weather gets hot, the grass over each grave dies in a perfect rectangle, the shape of the coffins.  It lasts at least a couple of months. 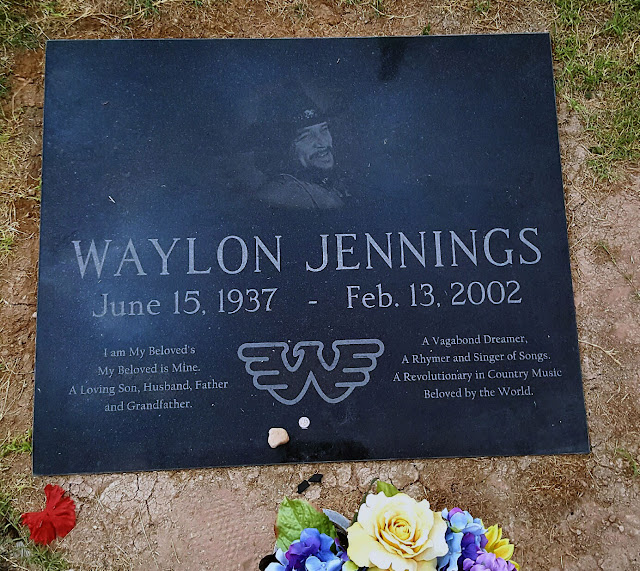 Here are just some of the several noted people included on the Walking Tour Guide and map:

William Austin Burton (1861-1949) - He owned and operated the first mortuary in Mesa, first to use embalming techniques, the first appointed permanent deputy marshal (1896), and first fire chief who built the first fire station.

Harry Lyman Chandler (1861-1955) - He founded a power utility which brought the first electricity to Mesa, established a natural gas company, and his brother AJ founded the city of Chandler.

Helen Millet Dana (1885-1961) - She was a nurse who operated a maternity home and helped a physician to deliver babies.  The traveled from place to place in a horse and buggy.  She helped deliver more than 12,500 babies.

Collins Rowe Hakes and Mabel Ama Morse Hakes - They were the first to discover gold in the Goldfield area of the Superstition Mountains.  They also built the first hotel in Mesa.

Daniel W. Iones (1830-1915) - He was an adventurous explorer, missionary and author.  He lived in north Mesa known as "Lehi".  His work protecting local Native Americans from what he view as the damming influence of settlers brought him into frequent conflict with law enforcement officials.  He was the author of "Forty Year Among the Indians" and was honored as the "Father of Lehi".

John L. Lee (Powder River Jack) (1874-1946) - He was an entertainer and best known for setting old cowboy poems to music.  He was a bronco buster and part of the Buffalo Bill Cody's Wild West Show.  He made the song "Red River Valley" popular after hearing it sung in a cow camp in South Dakota.  He wrote songs such as "Across the Great Divide", "The Cody Stampede" and "Song of the San Marcos".

William Morris Newell (1850-1932) - He built Mesa's first house which consisted of six posts with forks to hold the roof beams and had mud-plastered Saguaro ribs for walls.  He was appointed postmaster in 1904 and reported to be the first person to register as a Republican in Mesa.
cemeteries creepy deaths people