Prescott: Where Was Abby? 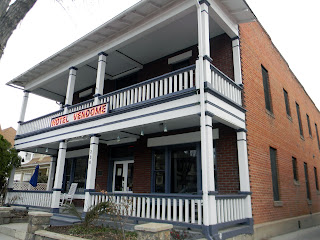 If someone were to ask me where I would like to be living, I would pick Prescott, Arizona. Prescott has that small town feel, but isn’t small. The downtown area around the Court House and the famous Whiskey Row has the old historical buildings and hotels along with small hometown shops and antique stores. There are many bungalows and cottages with historical plaques on them which line the many streets around town. It has the old town look and quaintness, but it still has all the amenities needed that a big city provides. I would never go bored hunting down all the places around town that are haunted and have great story about their ghosts. Oh yeah, the weather is nice too; not as hot as Phoenix or cold as Flagstaff….. just right.

Sharon and I picked Prescott as the place where we wanted to spend the night after visiting a couple of cemeteries and Vulture Mine. She booked room 16 which is known as Abby’s room and to be haunted. The story goes that Abby’s, who was ill, and her cat (Noble), starved to death in that room waiting for her husband to return with medicine. Sharon had an interesting experience in that room the last time she stayed there and couldn’t wait to give it another try. She brought Dale along to see if his presence would entice Abby to come out and play.

We settled in the room and went downstairs to read others experiences while staying in room 16, and then went out to eat. We left Dale on the floor by the closet door to guard it and make sure it stayed shut. That door has been known to open on its own. It’s weird, but the look on his face looked as if it went from happy to scare. That freaked me out.

When we got back to the room, Dale was still sitting by the closet door and appeared to not have moved. After messing around on our computers, we got the room ready for what we hoped would be a ghostly night. I never felt Abby’s presence in the room, but there was a distinct odor of a cat in the closet. Late in the night I felt something lightly walking on the covers. Many of the stories in the book also mentioned the feeling of a phantom cat walking on the bed while they were trying to sleep.

In the morning we checked all the objects we fixed to trap any ghosts that might move something, but none of it looked to be tampered with. We only experienced noises in the closet which sounded like scratching and meowing. Was poor Noble’s spirit still trapped in the closet?

We may not have experienced Abby’s paranormal activity, but we did get to see it snow. That may not sound too exciting for those who experience snowing all the time, but for us Phoenicians, it was a treat. Sharon was a bit worried about the roads being icy, but it quit before we left and the roads were clear.