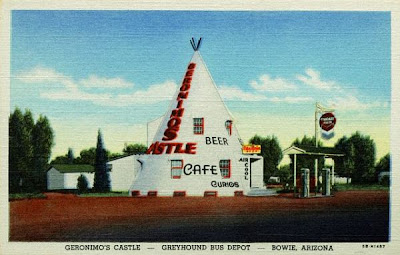 In the tiny town of Bowie, Arizona is a large teepee known as Geronimo’s Castle. In the 1940’s it was a Greyhound Bus Station, and later had a café and shop within its atypical walls. It was also once a filling station, and a bar with the motto, “Stop in for a bottle of beer”. Accounts are told that Chief Geronimo was captured on that site, but history tells another story. Sadly, the place closed its doors in 2004 and is now an abandoned place worth seeing. The owners are hoping to someday reopen the establishment and serve all the weary visitors traveling through Bowie.

Bowie is located in southeast Arizona, Cochise County, near the New Mexico border. Just off Interstate 10 east of Tucson sits this small standalone settlement.  The community was named after nearby Fort Bowie, and was established in 1880. It survived by the activity of the Southern and Pacific Railroad which ran through the town. Today, around 600 residents call Bowie home and it is a nice place to visit. If you like hiking in the mountains through a forestry terrain, Bowie is the place to be.
abandoned bizarre historical native american