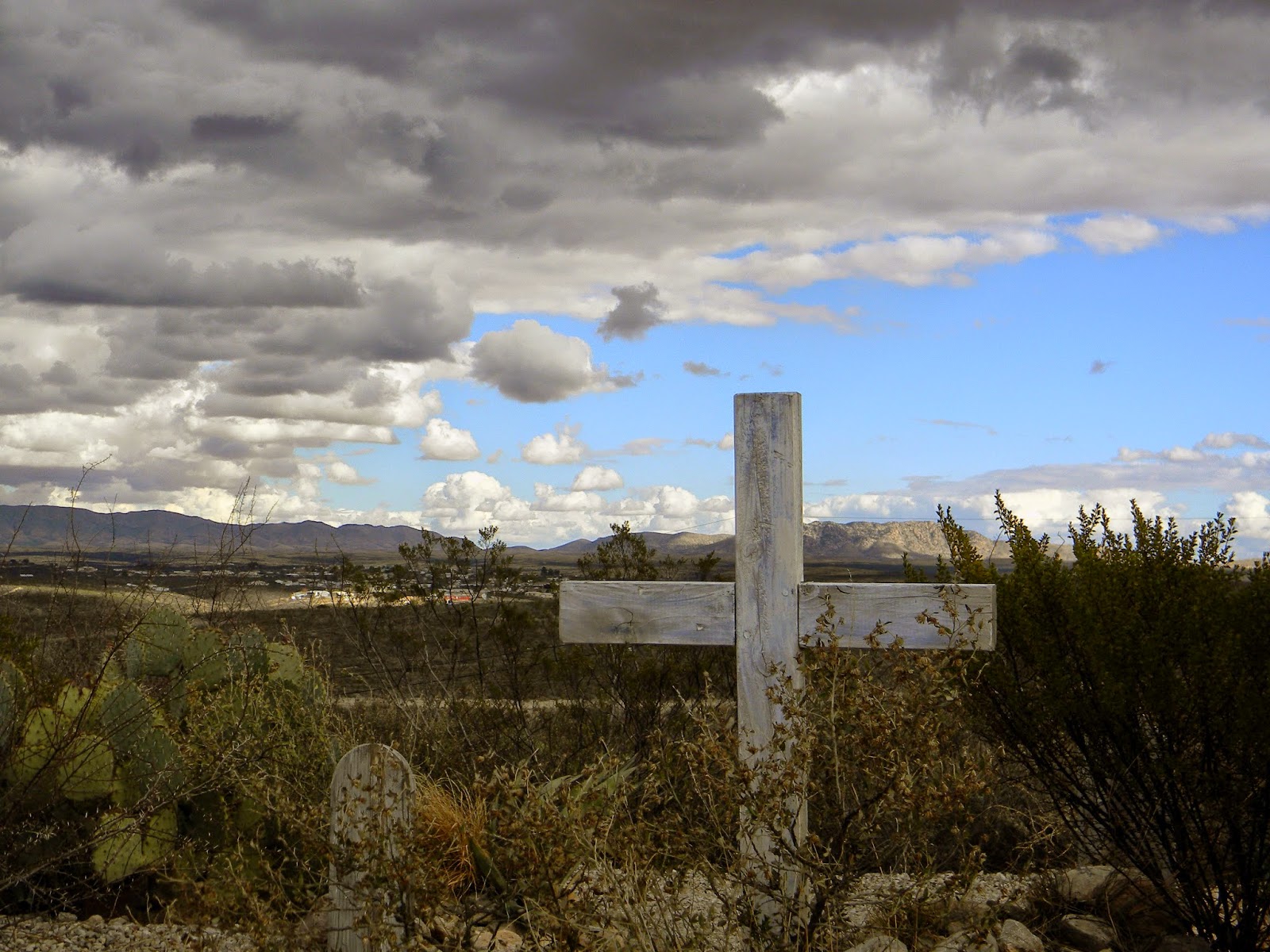 I have been to several creepy but gorgeous cemeteries around Arizona.  There are so many old west cemeteries in such disarray with hardly a headstone visible anywhere.  There are others in much better shape and are well maintained.  Whether they are being taken care of or not, they are still fantastic places to photograph especially if the sun is going down.  When I photograph an interesting grave or headstone, I look for what is around it and how the light shines on the image.  I pick the right angle and shoot.  Depending how the light shines on the grave/headstone, you can end up with an eerie yet stunning photo. 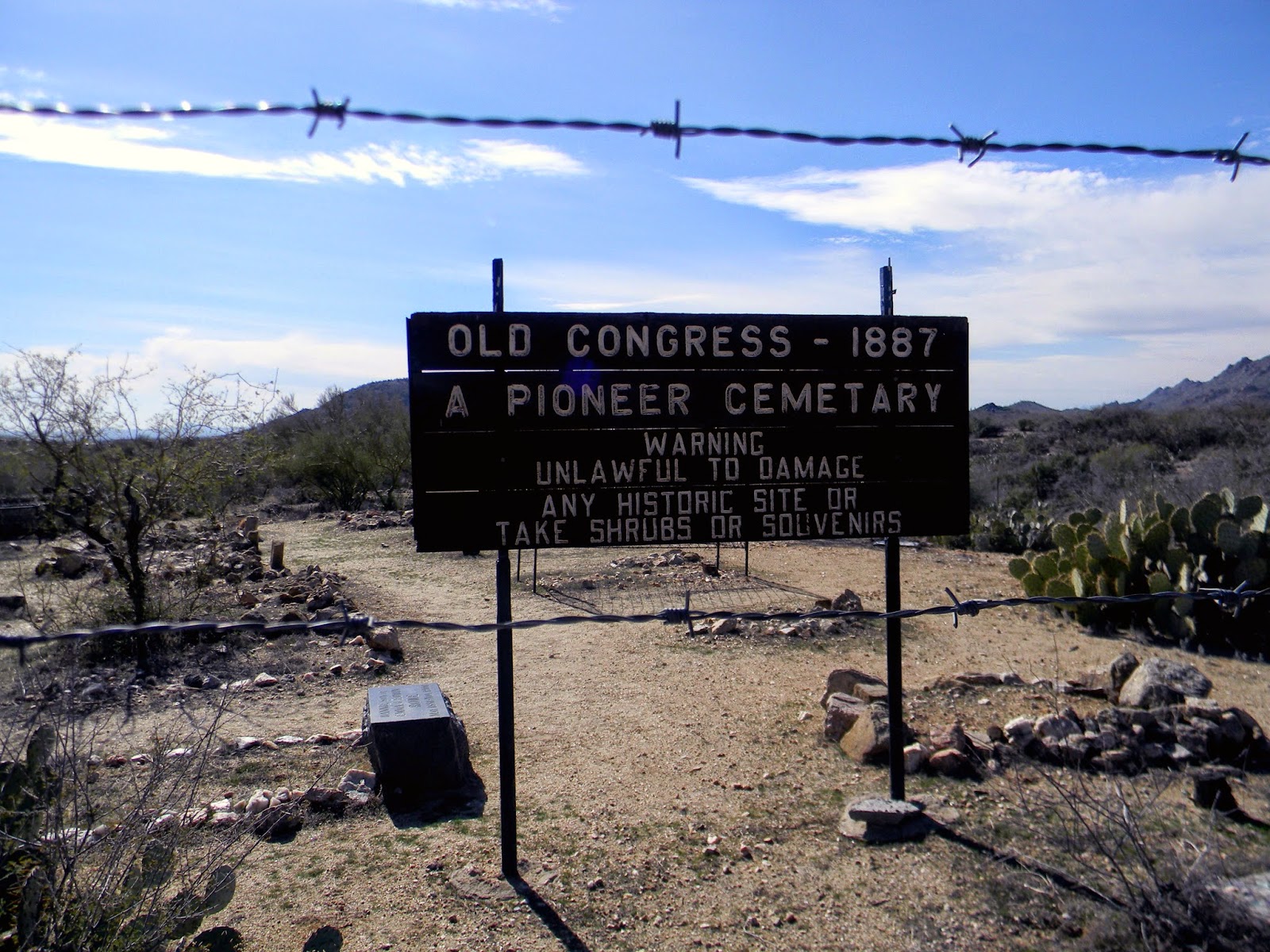 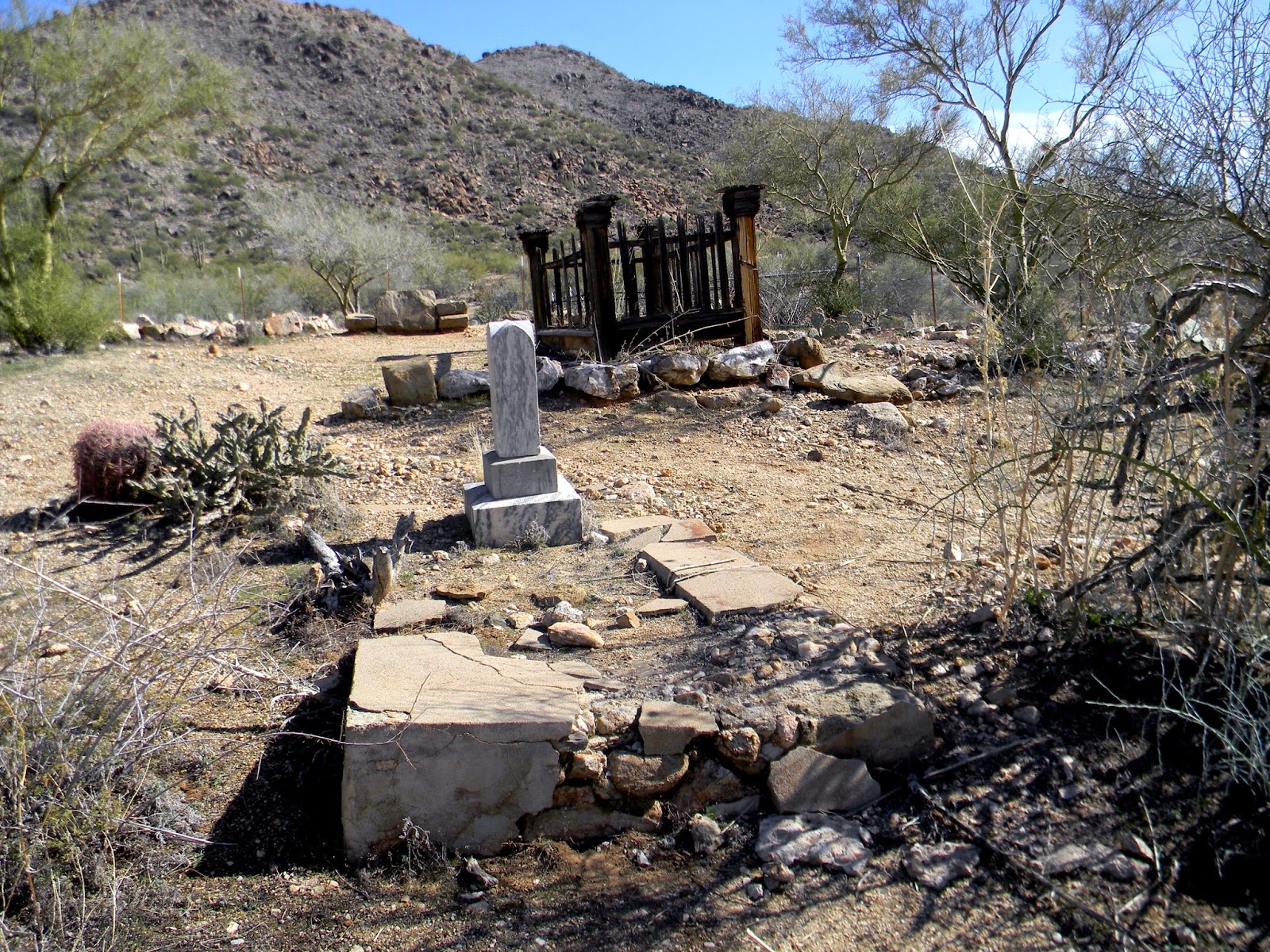 Located northeast of Wickenburg on AZ Hwy 93 and then north on SR 89 is the diminutive town of Congress.  All that remains of the town are some old buildings and the Old Congress Cemetery. To get to the cemetery, you have to take a dirt road off the main highway. It takes you a couple of miles before you will see the gates of the old cemetery. The grounds are still maintained by the town’s committee. As you look around, the place has that old west, haunted look and feel to it. Most of the metal fences are rusty, and the wood fences are broken as well as some of the headstones. While walking through the dusty grounds, you are taken back to when the west was wild. 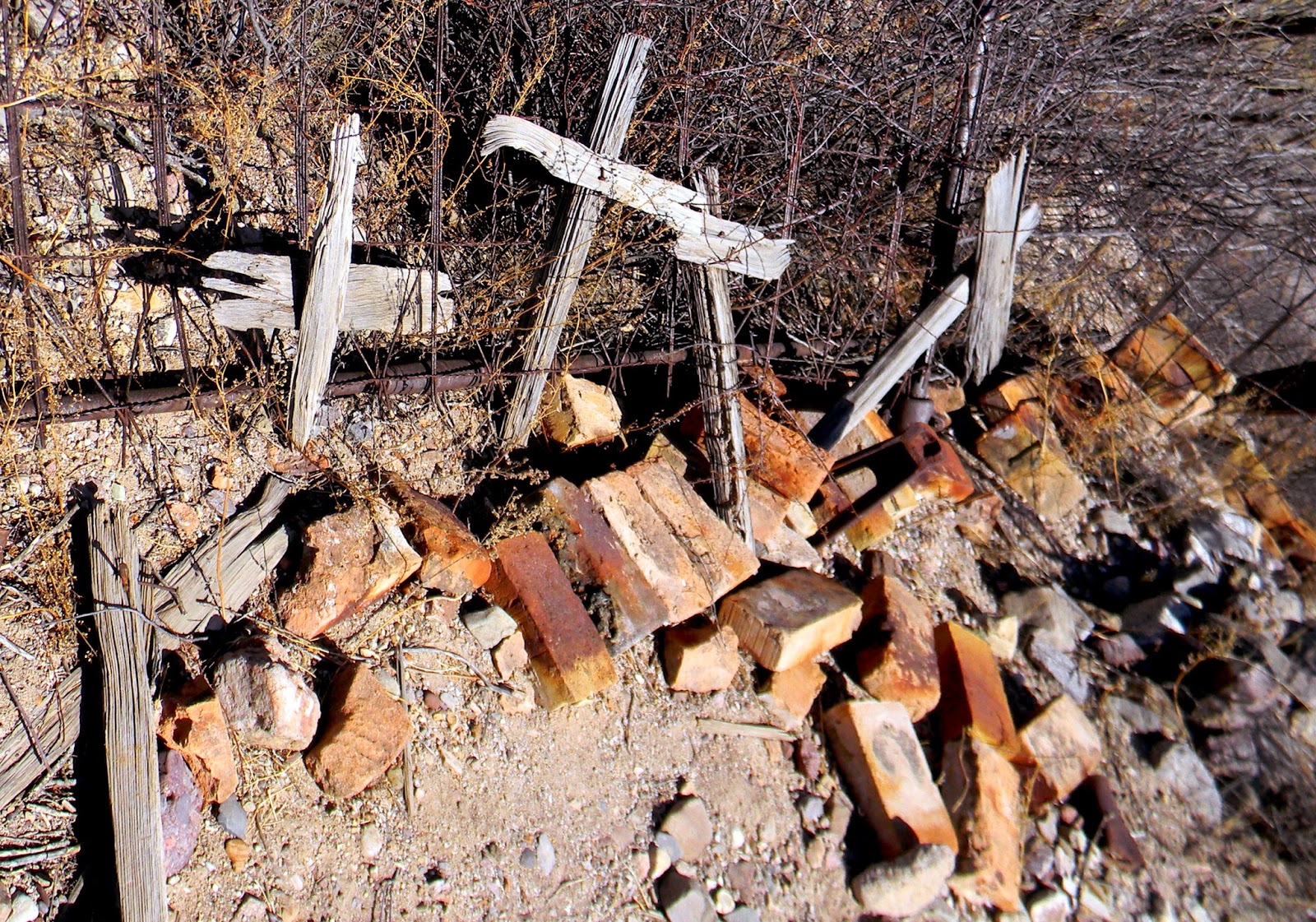 The Fairbank Cemetery is about ½ mile from the town and historic buildings of Fairbank Historic Town Site. The dirt trail is flat for most of the way, except when you get near the cemetery. The small dusty trail becomes steep along the side of a hill. On top of the hill are amazing views of the San Pedro River Valley where the cemetery sits and only three graves are currently marked. Most of the graves were barely noticeable from the many years of abrasive weather and lightning strikes. Many of the Fairbank’s past residents are more than likely buried in those graves. 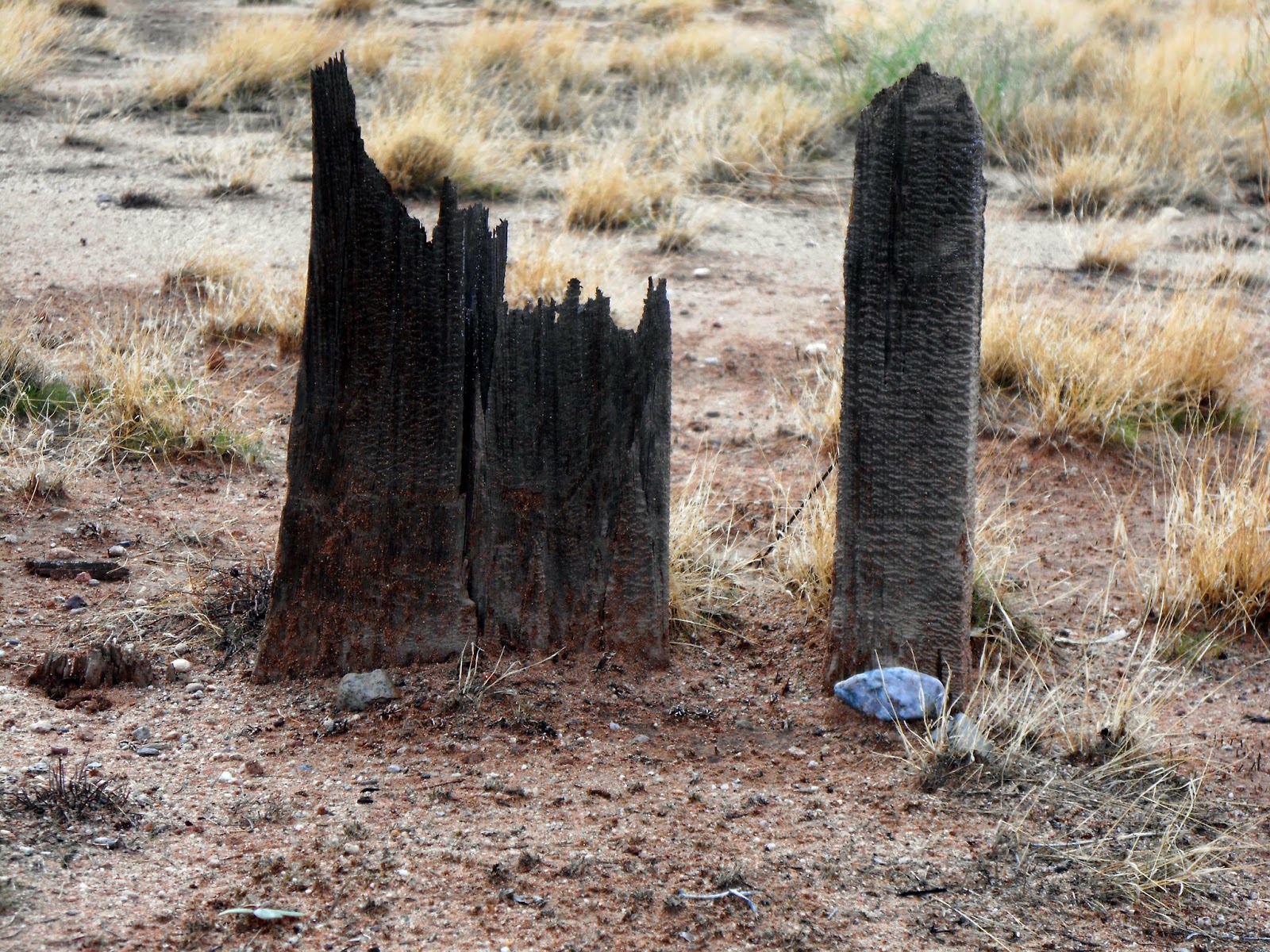 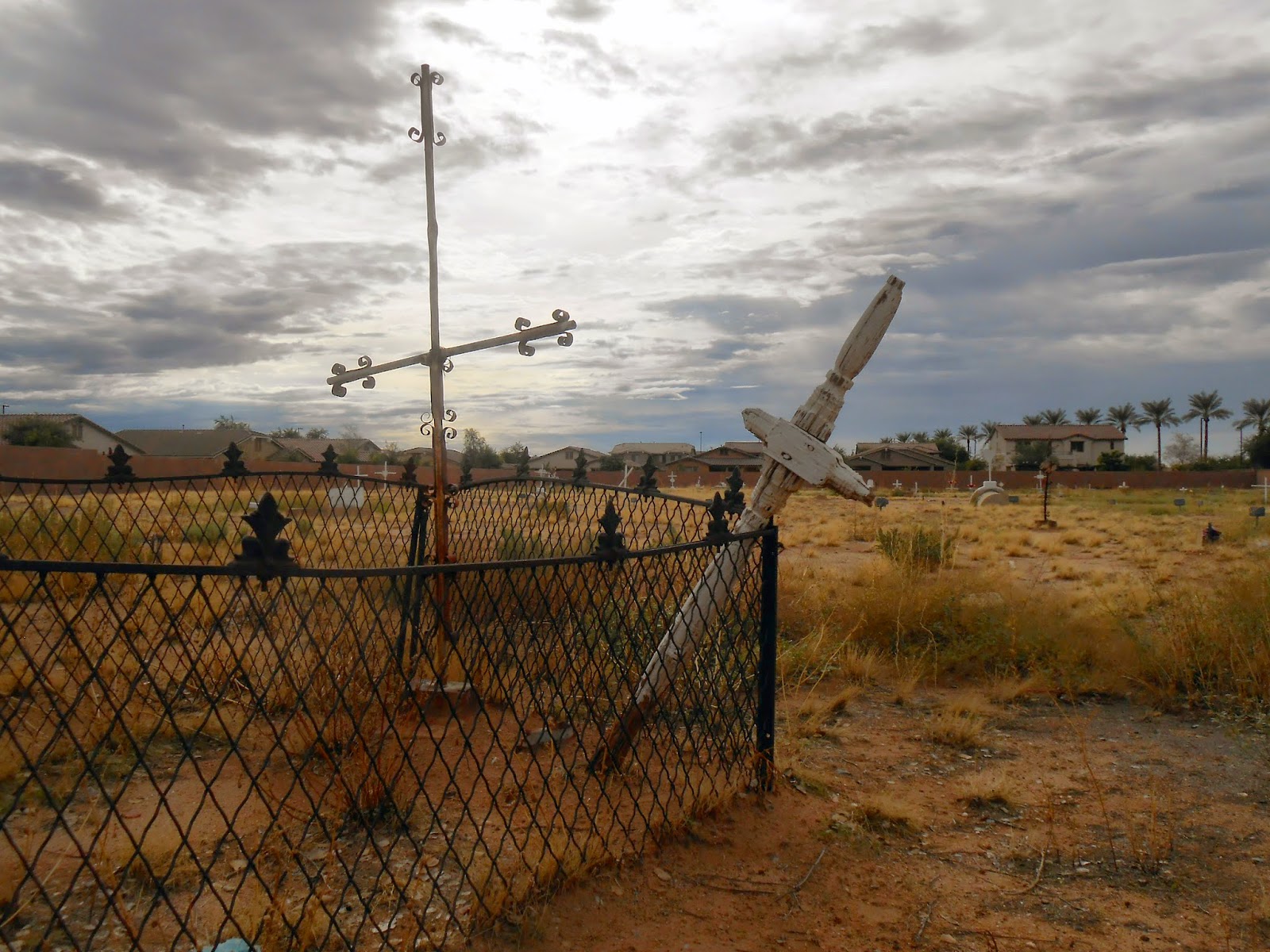 The cemetery is surrounded by a block wall in the middle of the prestigious community of Fulton Ranch situated in the city of Chandler. It is located 0.1 mile south of Fulton Ranch Boulevard on South Iowa Street. The outside entrance is beautifully landscaped with flowers, bushes, grass, and a bench to rest on. The scenery inside the gates of the cemetery is quite unlike the outside. The grounds are dirt with tumbleweeds and no plant life anywhere except for the tall dry grass. Scattered throughout are the grave markers and headstones. Many of them are broken and rusty from lack of care. The severe Arizona weather and vandals have raised havoc on this eerie little graveyard. The only signs of color inside the walls are the few flowers put there by relatives or someone who cared. 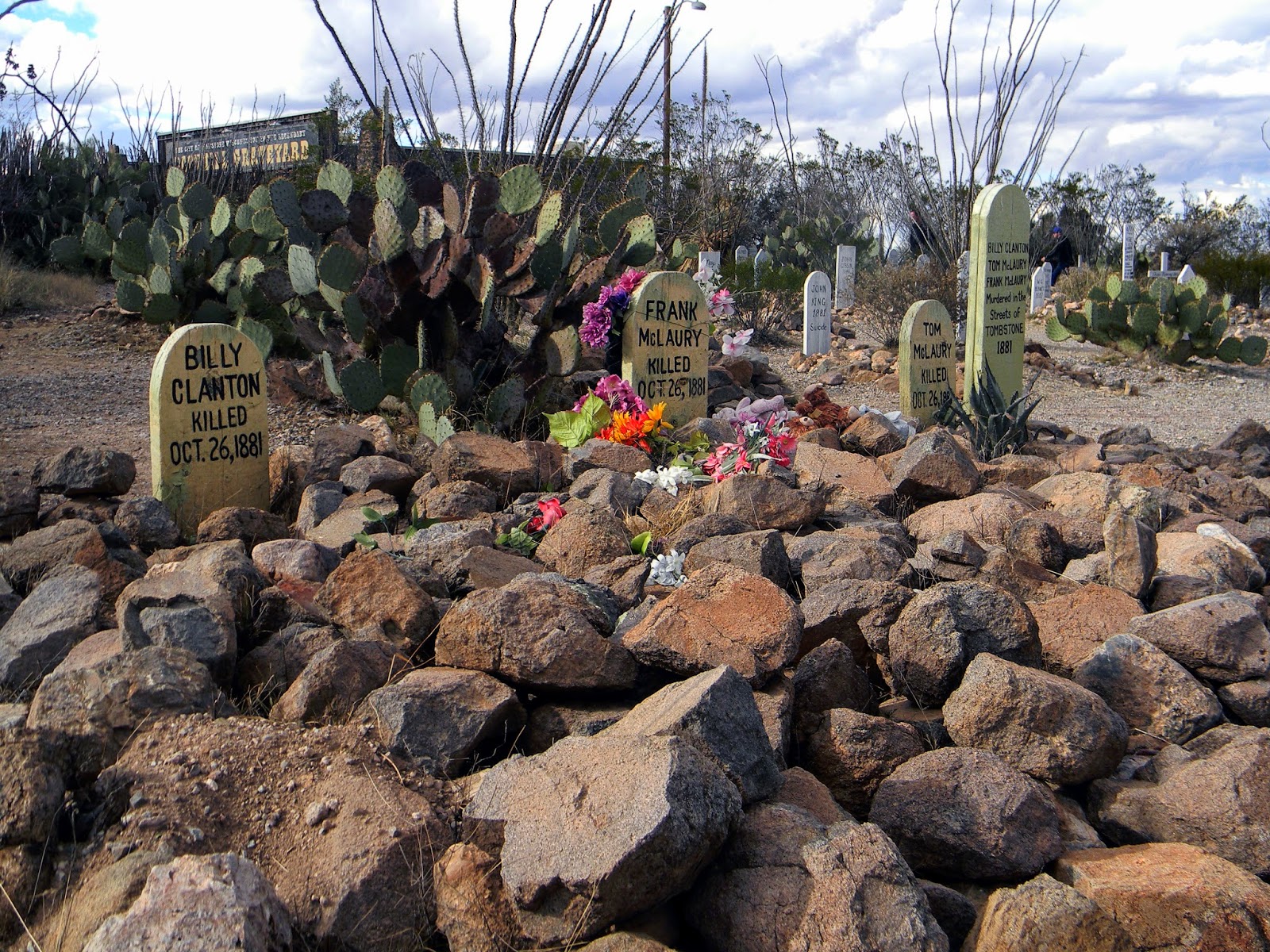 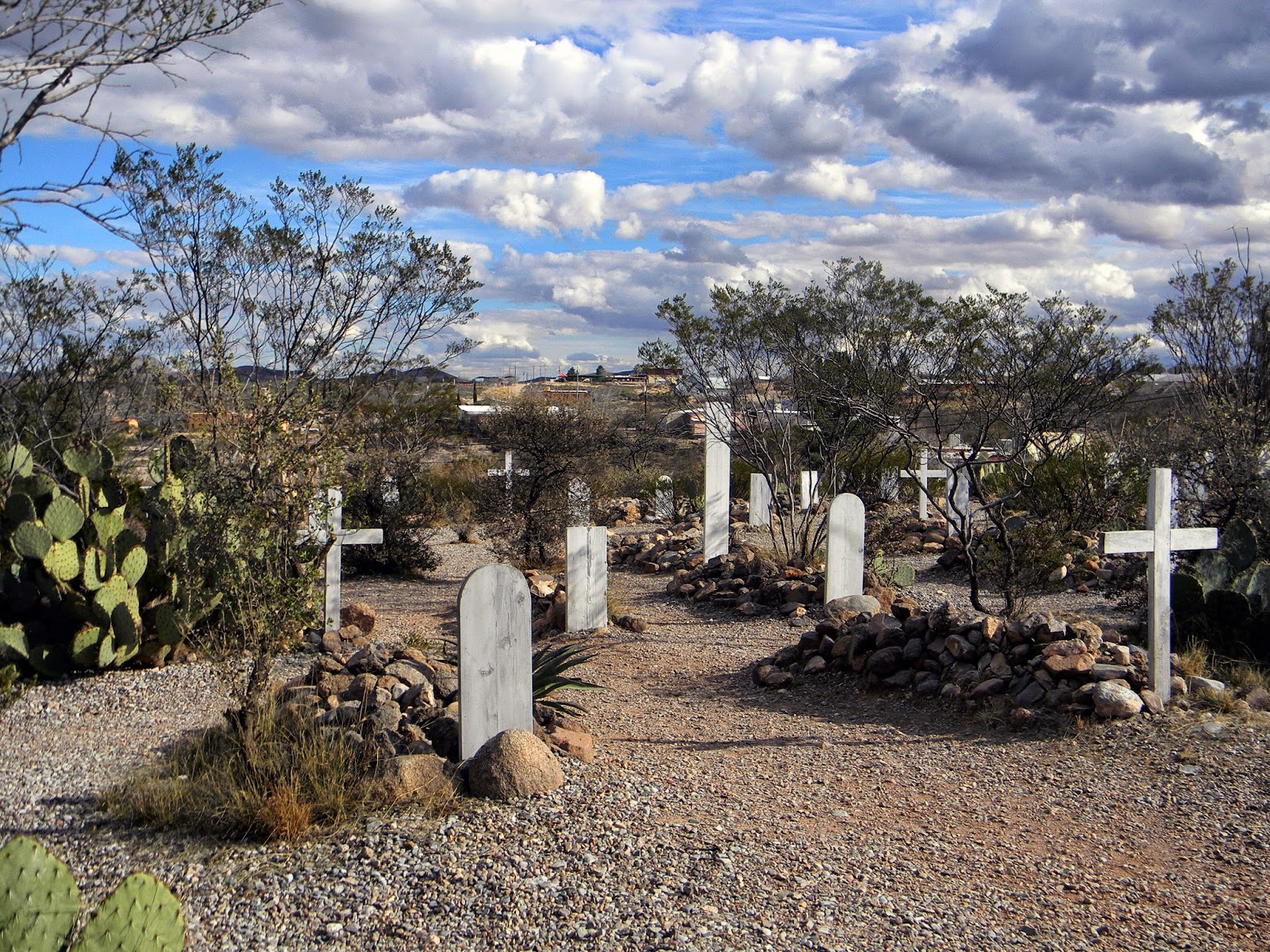 Sitting just outside of Tombstone is the famous burial grounds known as the Boot Hill Graveyard.  Many famous and not-so-famous are buried amongst the dirt, cacti, and rocks.  Three of the participants in the gunfight at the O.K. Corral (Billy Clanton, Frank and Tom McLaury) along with outlaws, lawmen, and citizens living in Tombstone make up the many graves that line the grounds of the cemetery.  Many say that ghosts are wandering the premises and some have witnessed their apparitions. 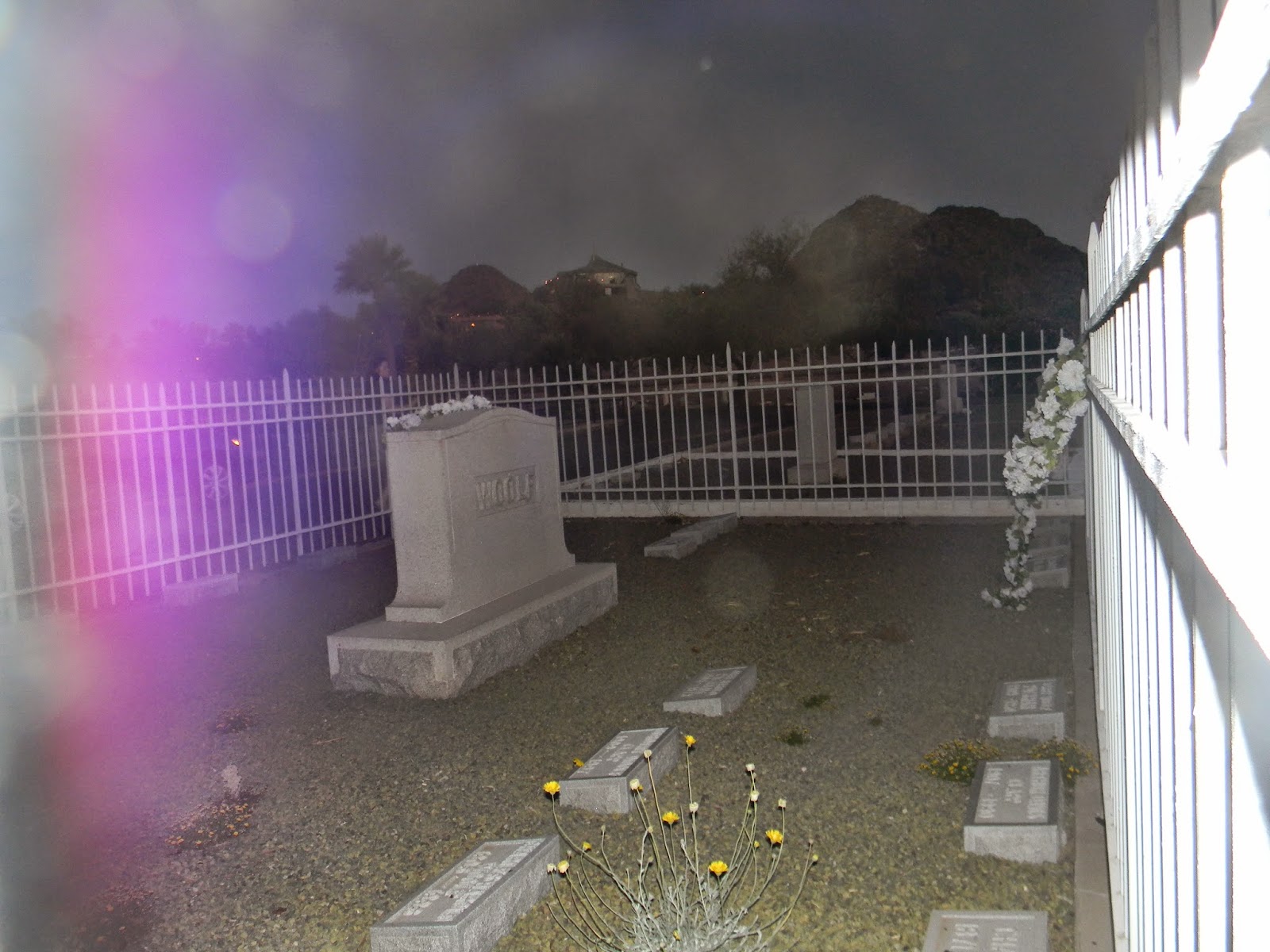 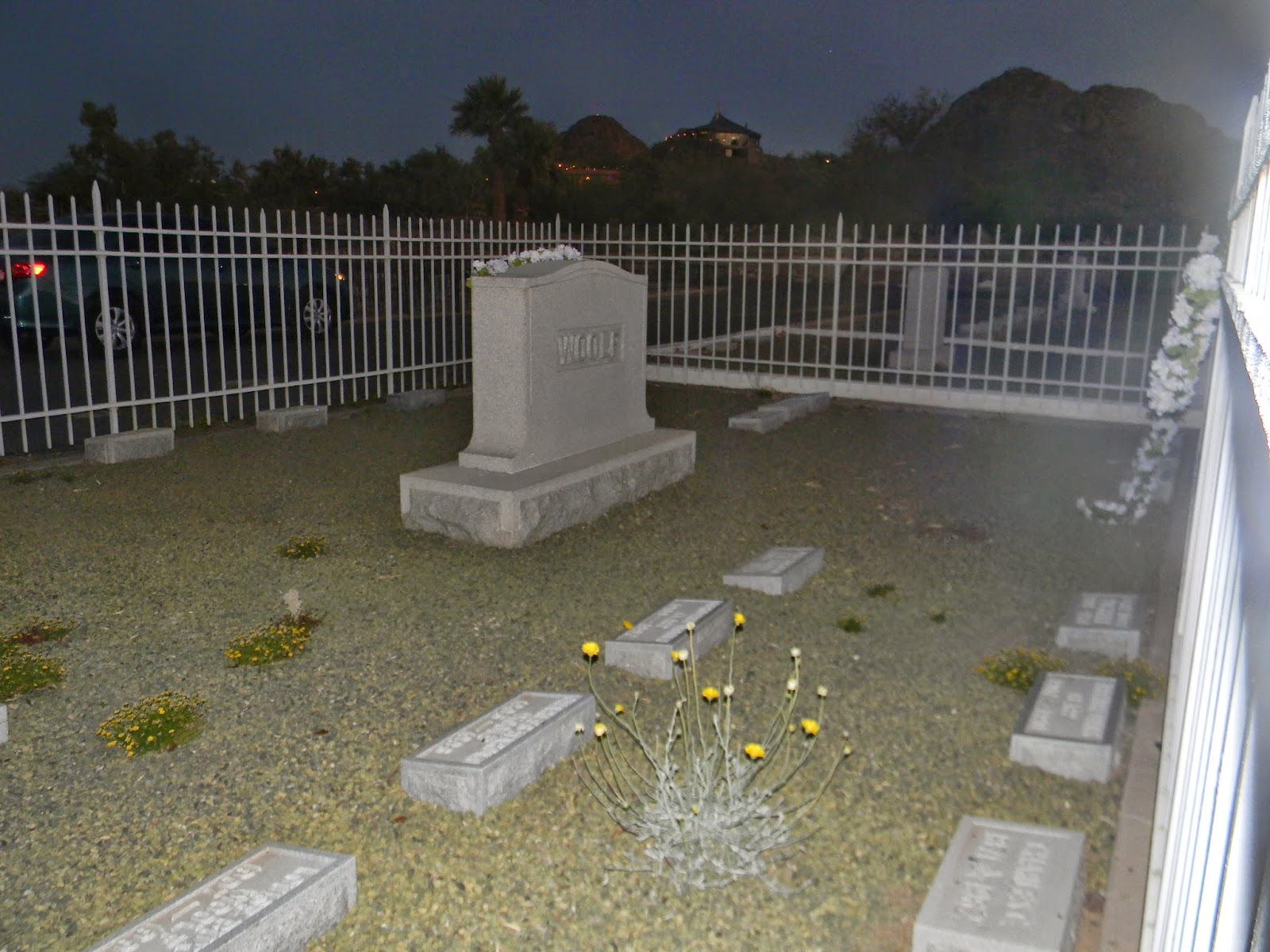 On September 13, 1887, a group of citizens formed a group called, "Tempe Cemetery Association", and started the Double Buttes Cemetery in Tempe, AZ.   The property was donated by Niels Peterson in 1888.  Many famous Arizona citizens are buried in this cemetery.   I went there with Sharon and we took a bunch of pictures by the Woolf family’s plot.  Standing in the same spot and shooting three pictures in a row, I got a weird rainbow mist in one and nothing in the others.  This happened a few more times as I moved around the plot.  It was dark and there were no lights in the area.  Others have experience shadow people and weird lights.  It is a creepy cemetery for sure. 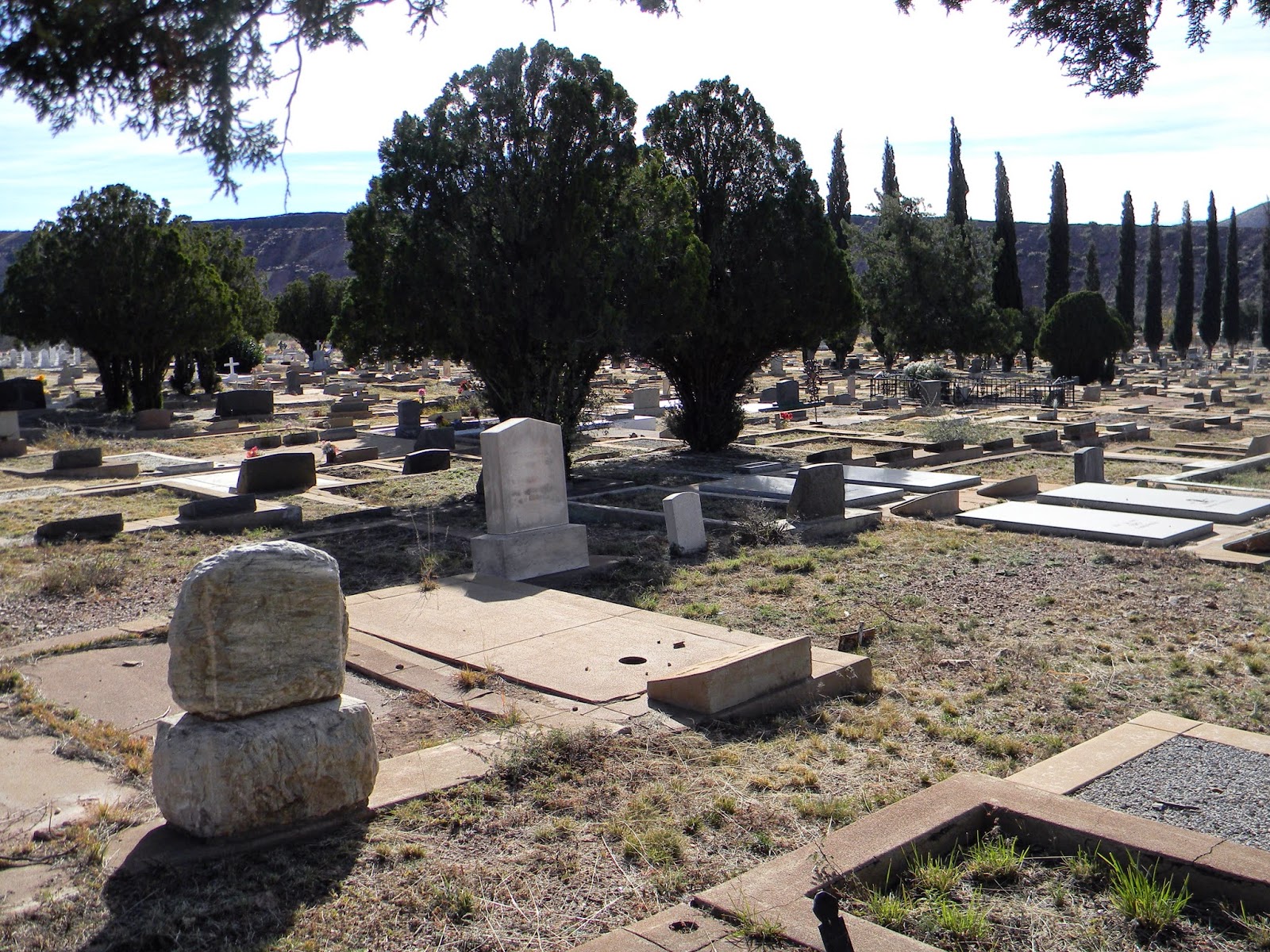 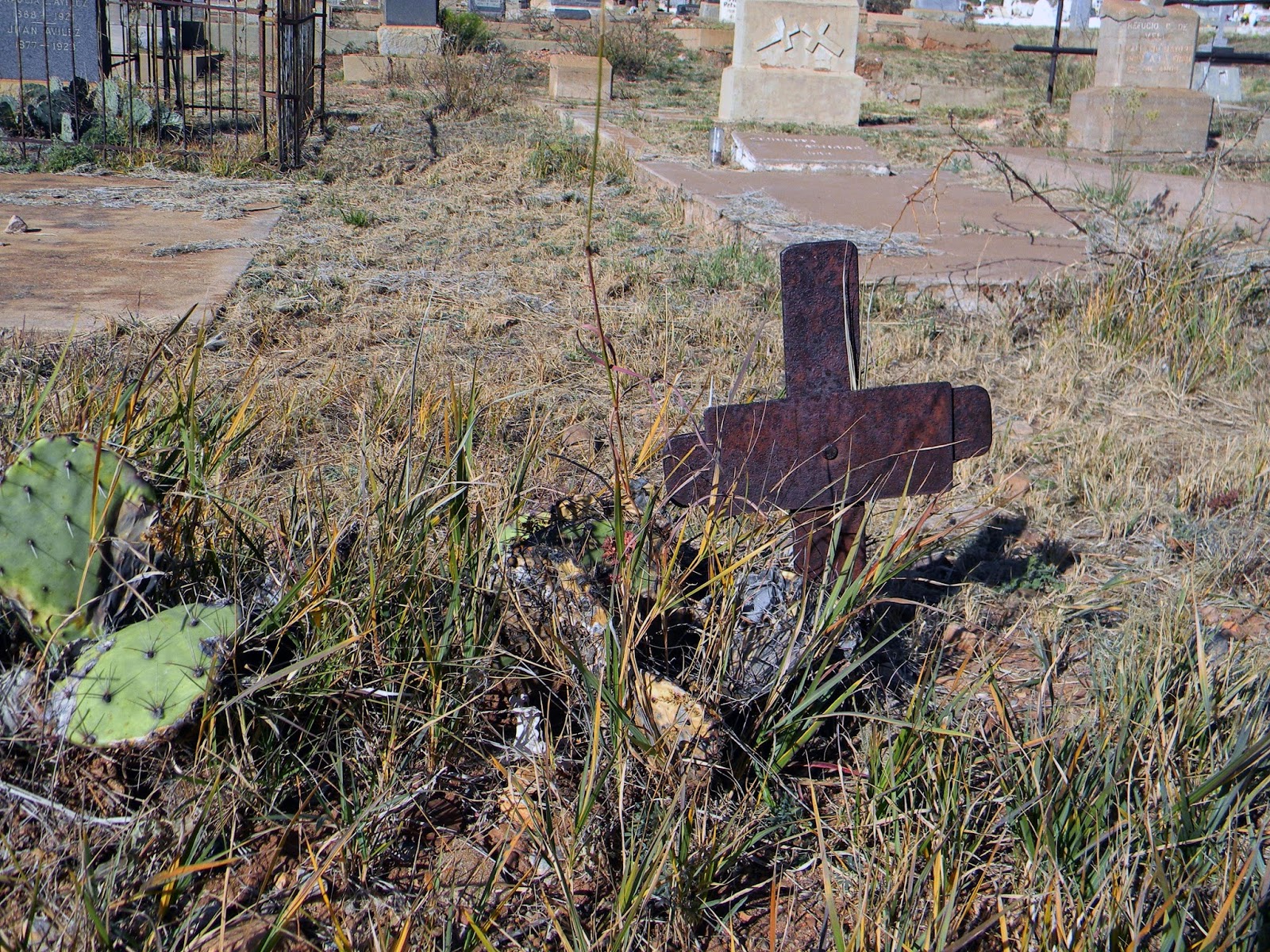 In 1912 the old cemetery, located in Brewery Gulch in Old Bisbee, was closed and replaced by Evergreen Cemetery. By 1914, the bones of the residents buried there were all removed and relocated. Because some of the records were unfinished and many of the tombstones have rotted away, many feel that there are still buried souls are under City Park’s grounds where the old cemetery used to be.  Buried in the Evergreen Cemetery are many of Bisbee’s most prominent residents from its colorful past. Many played important roles in the history of Bisbee and are part of Bisbee’s ghost stories.  This is another cemetery where people have reported seeing apparitions and strange lights.  Each time I have been there at dusk, I got the feeling like someone unseen was watching me.  Was it an organic person or a spirit of those buried there?

ST. FRANCIS CATHOLIC CEMETERY
This cemetery started in 1897 in Phoenix.  The cemetery was previously managed by the “Order of St. Francis until 1969, under the Diocese of Tucson”.  After that time, it assumed a sovereign position and taken care of by volunteers.  Spooky shadow figures have been seen there after dark. 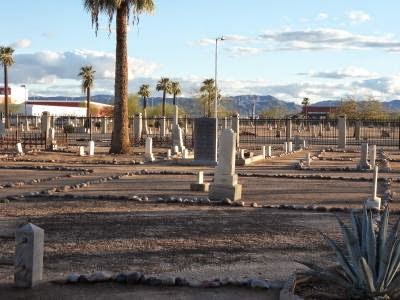 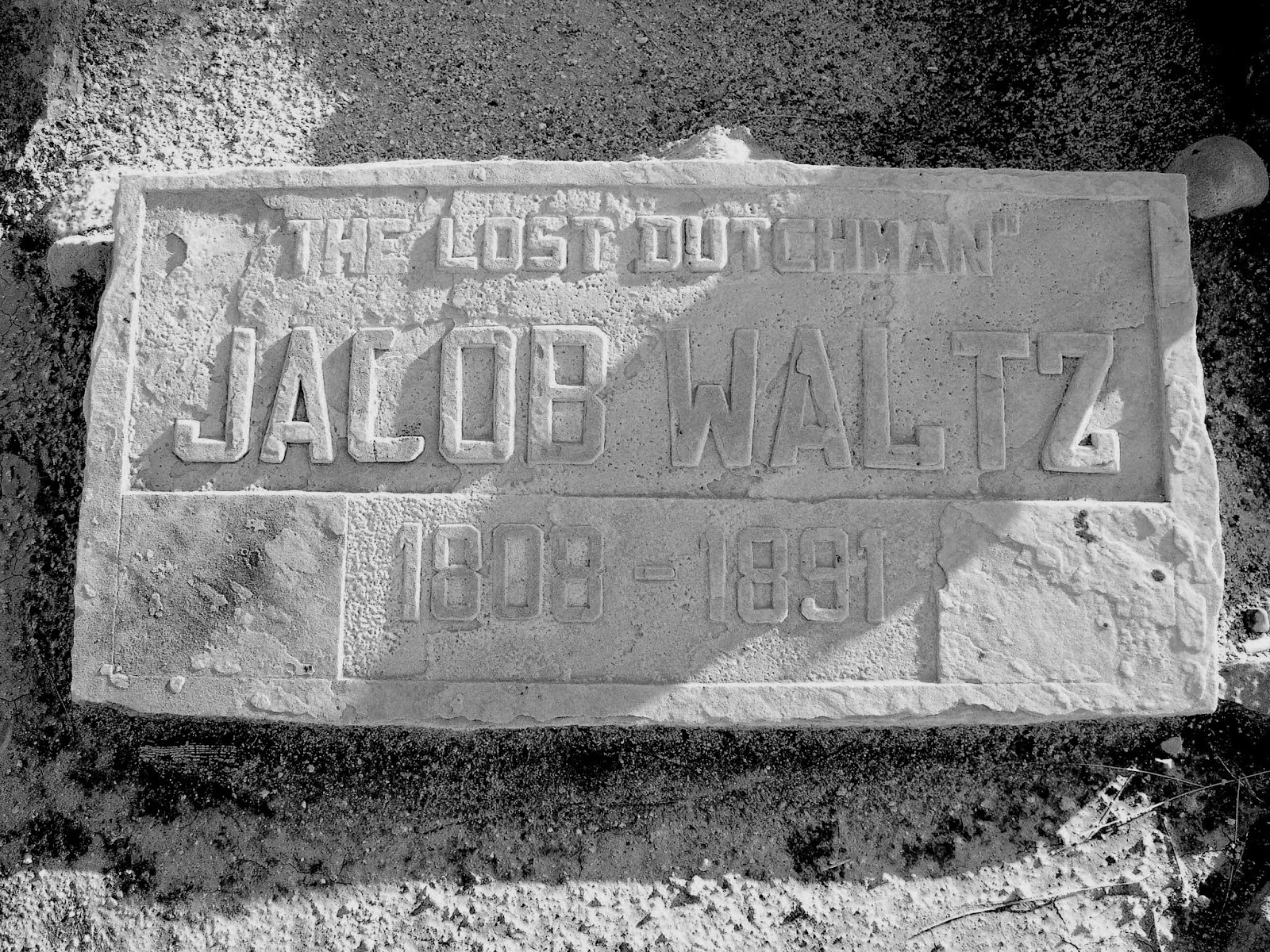 Pioneer and Military Memorial Park serves as a monument to the pioneer families of Arizona. The park's historic cemeteries are the final resting place to notable figures in Arizona history and folklore, including John T. Alsap, who was the first Maricopa County Probate Judge in 1871 and first Mayor of Phoenix in 1881. Jacob Walz, the Dutchman of Superstition Mountain fame, also rests here. A monument to Walz includes a simulation of Weaver's Needle and some of the imposing bluffs that serve as landmarks of the famous Superstition Wilderness. Walz and his legendary "Lost Dutchman" gold mine have become part of the internationally-known folklore of the southwestern United States.   The historic Smurthwaite House was relocated to the park in 1994. Restoration, which began in May of 1998, was completed in 2004.
cemeteries ghosts haunted places people photography