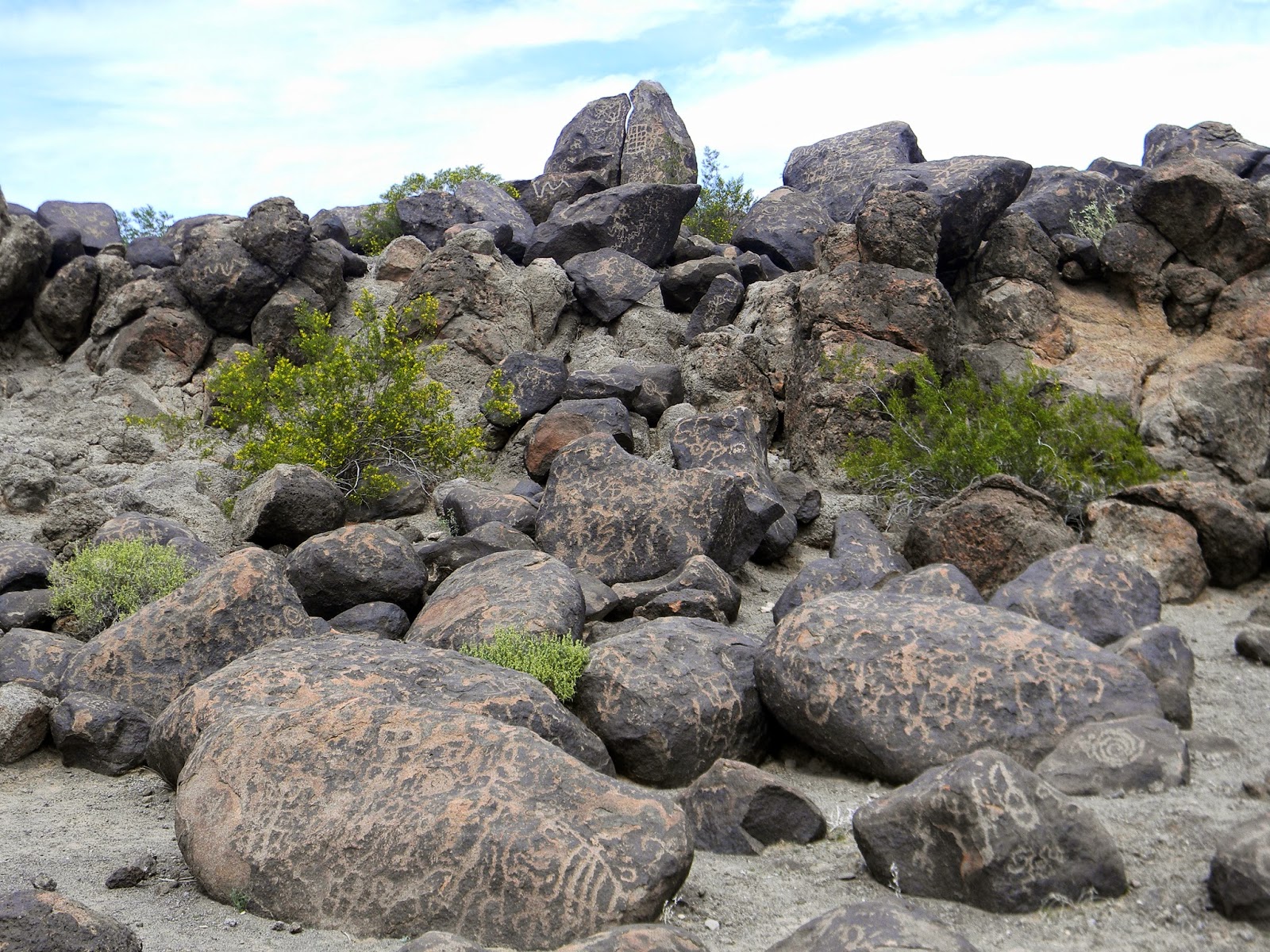 Petroglyphs have been found on rocks and boulders all over the southwest. A petroglyph is an ancient drawing carved by primordial man. They are pictogram and logogram images done by wearing down or chafing impressions in solid rock. Some say they are astronomical markers, maps, or some type of symbolic communication telling stories of life many centuries ago. This ancient rock art is one way to study how the pre-Columbian civilizations may have once lived and where they mysteriously disappeared to.

These rock carvings can be found all over Arizona as well as other places.  I have seen some of the writings and pictures and am fascinated by what the symbols possibly mean.  I am sure they tell fascinating stories of how life was like for the ancient Native American people and the unusual things they encountered.  Here are just some of the Arizona sites: 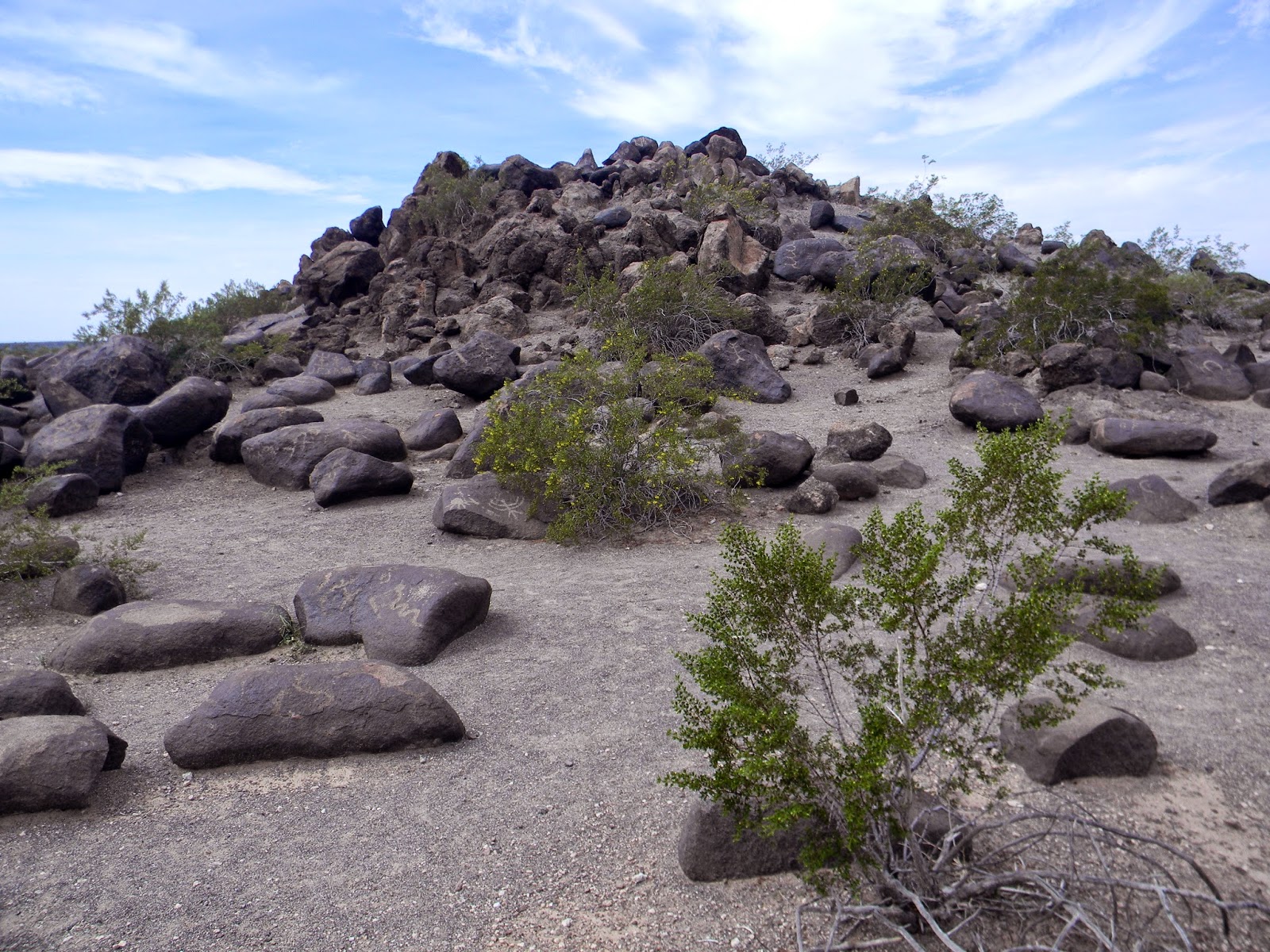 Painted Rock Petroglyph Site is one of the many sites found in Arizona and is 18 miles west by northwest of Gila Bend on the Painted Rock Mountains. This site has over 800 images which are engraved in basalt boulders. Many of the imprints can be found on the eastern side of the mountain’s rim. Other people who came upon this site have left their mark on the boulders too. Along with the petroglyphs and dotted throughout the landscape are traces of ancient Hohokam ruins. Some historical and famous events happened in close proximity of the site such as Juan Bautisa de Anza’s expedition. He originated the city of San Francisco. In 1989, the Painted Rock Petroglyph Site was now under the authority of the Bureau of Land Management. 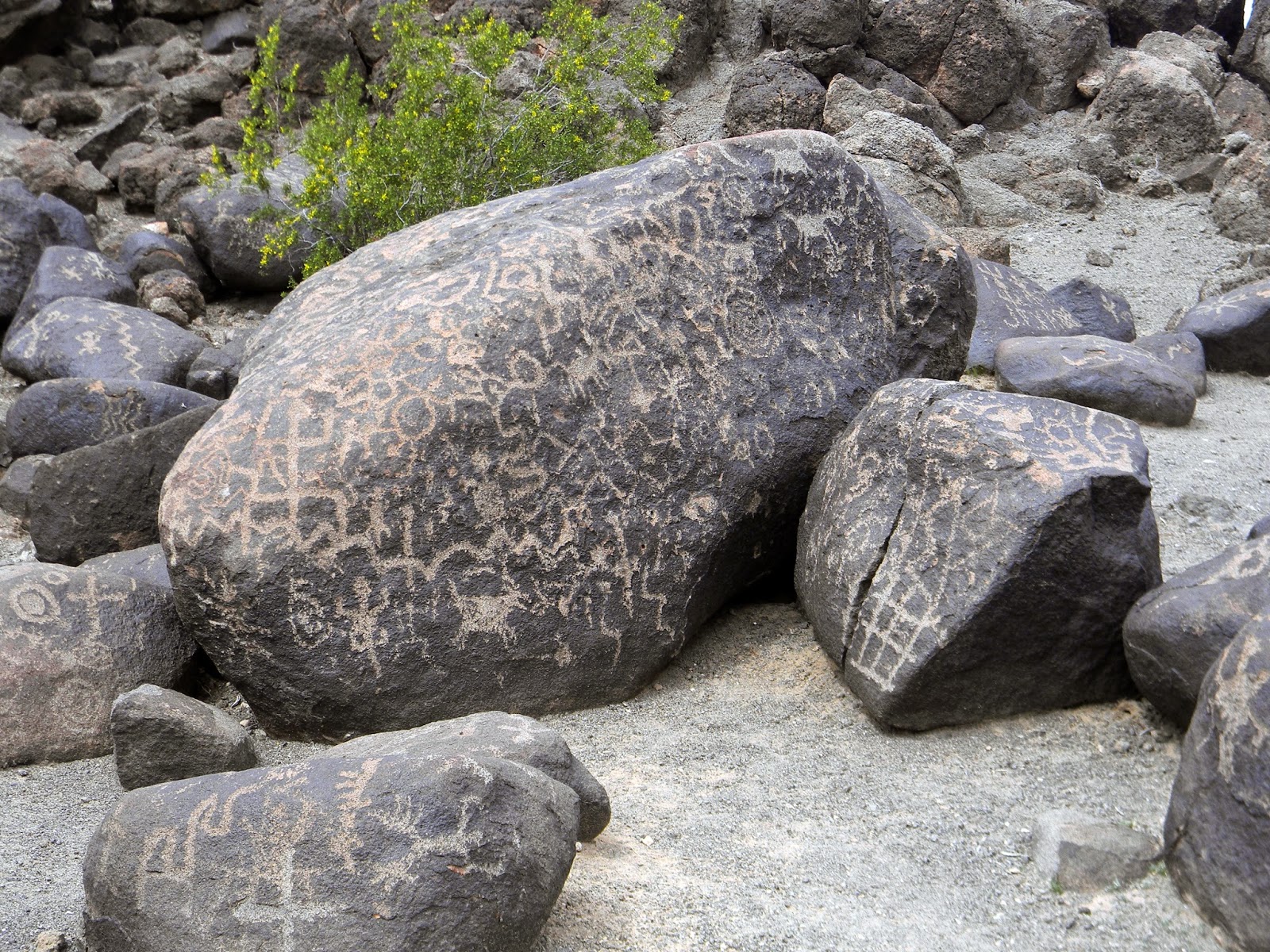 One of the most prevalent sites with petroglyphs is located in the Verde Valley between Sedona and Flagstaff. The V-Bar-V Heritage Site is well preserved and was obtained by the Coconino National Forest in 1994. The location has approximately 1,032 etchings on 13 panels and is a wealth of information about the beliefs in each era of the Hohokam people’s existence. The distinctive approach of the drawings is identified as the “Beaver Creek Rock Art Style” used by the southern Sinagua between AD1150 and 1400.

ROCK ART RANCH
Rock Art Ranch is privately own near Winslow with a chasm full of petroglyphs. The profound gorge has a brook flowing inside its mighty walls and stairs leading inside the ravine along the rim to an observation area built by the ranch’s owner. This space has an incredible view and is a nice place to have a picnic. The ranch also has a museum for your pleasure. 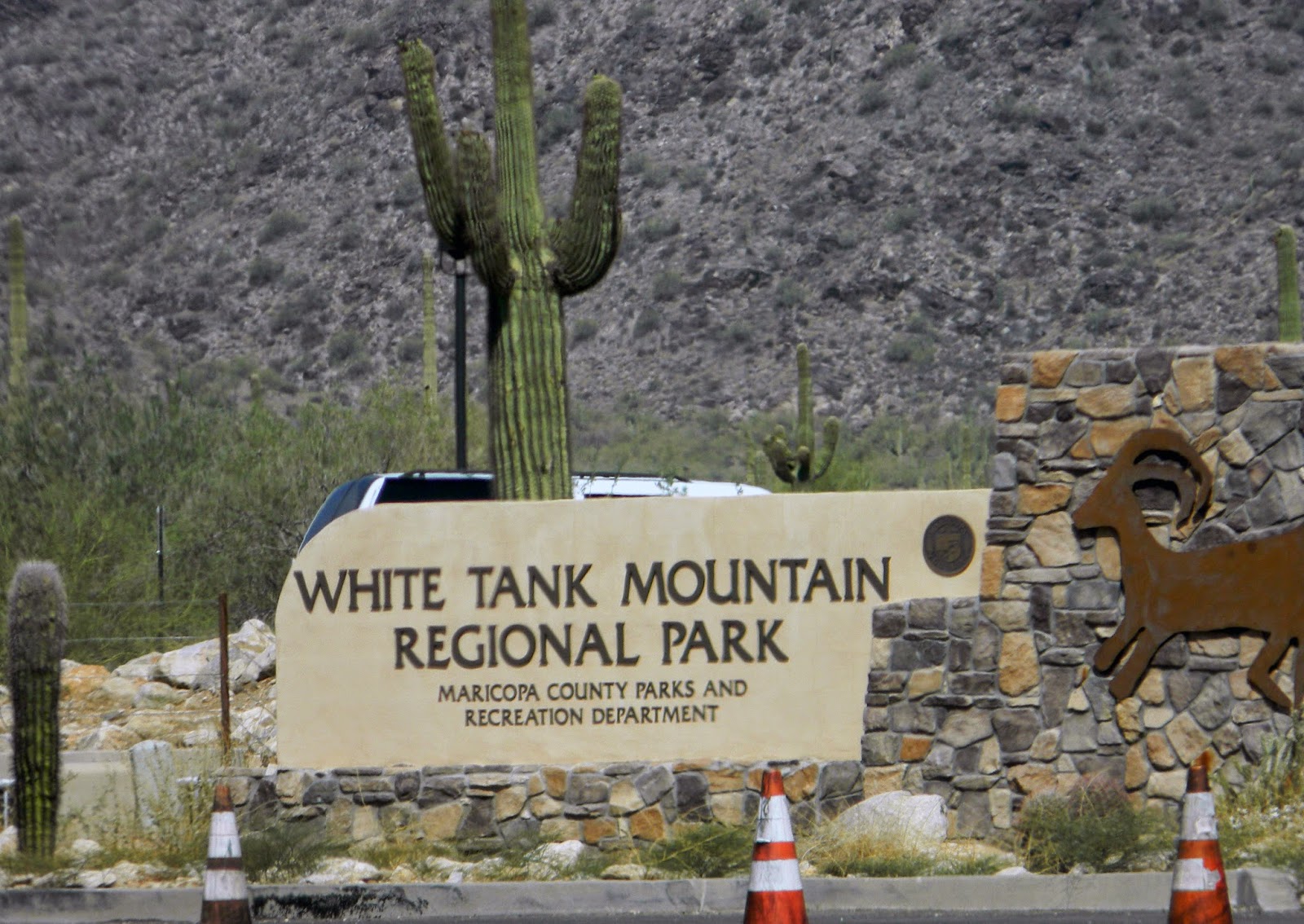 White Tank Mountain Regional Preserve mountain range is located west of Phoenix near the city of Surprise.  They get their name for the white granite near the base of the mountains and its many depressions also known as “tanks”.   The mountain range has numerous petroglyphs found scattered around the peaks and may predate the Hohokam people. Approximately 11 archaeological sites were recognized along with 7 Hohokam villages.  There are various trails leading to these sites and villages dispersed and marked for your interests.  You can take as many pictures of the sites and petroglyphs, but all they ask is that you don’t touch them. 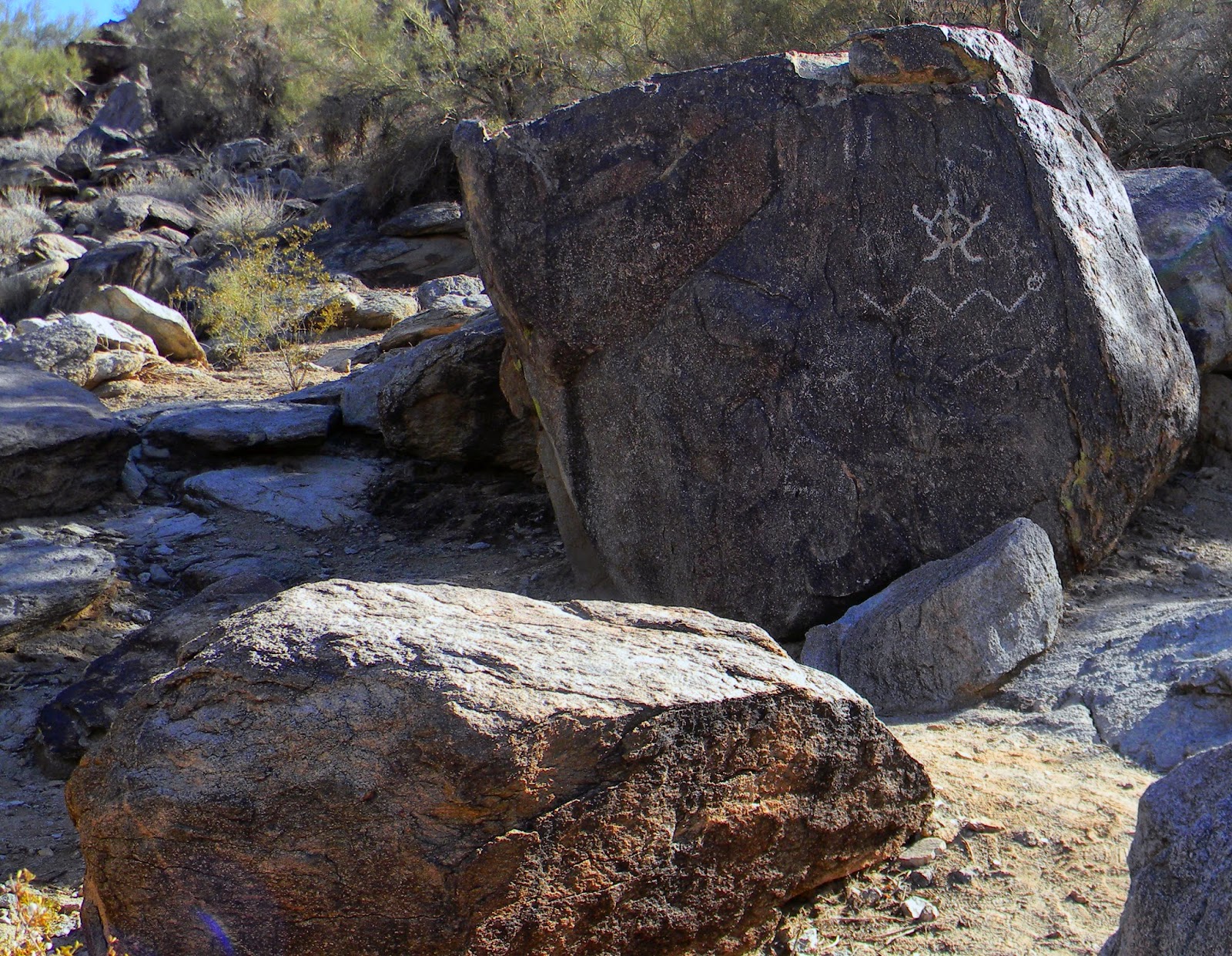 South Mountain Park is just south of Phoenix and is another place to find petroglyphs. This park is about 1600 acres and has several different trails where the etchings can be found. Also carved by the ancient Hohokam people, the drawings are believed by the Pima Indians as having a mystical importance. No one really knows exactly what this prehistoric tribe was thinking when each drawing was carved.
art historical mountains mystery native american petroglyphs