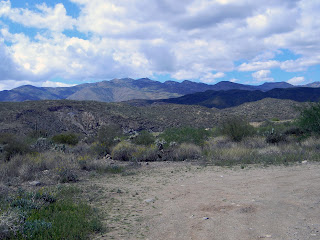 Located in central Arizona in the Sonoran Desert sits the harsh black rock terrain known as the Bradshaw Mountains.  Named after William Bradshaw, this mountain range consists of an interior forest, to an exterior desert grassland and shrubbery from the Sonoran Desert surrounding the rocks.


(From Wikipedia)  “The first known settlements in the Bradshaw’s were a group of Yavapai Indians called the Kwevkapaya who built forts and mined copper from around AD 1100 to 1600.  Apaches occupied the area around 1800 as a means of keeping white settlers out.  But by 1863, a party led by William Bradshaw was in the area, followed by the Walker party.  In 1864, a group of five white settlers was attacked by Apaches at what is now called Battle Flat.  One of the settlers went for help, but upon his return found the Apaches had left.  The Walker party found gold, and within a few years, the Bradshaw’s were filling up with settlers mining for gold, silver, and copper.  In the early part of the 20th century, most of the towns that had sprung up were little more than ghost towns.”
Today there are over 40 ghost towns that surround the Bradshaw Mountains.  Along with the cacti, several creatures such as javelinas, mule deer, wild turkey and short-horned lizards make the black rocks and surrounding desert their home.