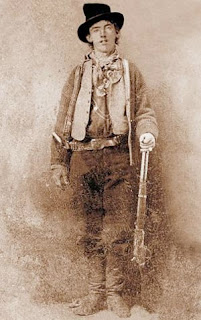 We have long thought Billy the Kid was left-handed, but a Winchester rifle tells it differently.  Billy the Kid's famous photo shows his gun belt on his left side.  The kid, born William Bonney, was portrayed as a leftie because a negative image was mistaken as a positive one when the picture was developed.  This reversal or mirror image made it appear like he was holding the Winchester Model 1873 lever-action rifle in his left hand with the loading gate on the left side.  This particular rifle only loaded on the right.  Hum, makes you wonder, was he a leftie or rightie?