Wild West Mystery: The Gunfight at the O.K. Corral 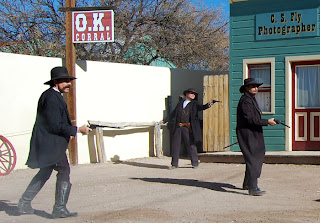 They say that the famous gunfight at the O.K. Corral didn't happen at the corral at all.  It is definitely one of the most famous gunfights in history but some people are not impressed.  The shootout was between the Earp brothers, Doc Holliday, Billy Claireborne, two of the Clanton brothers, and two of the McLaury brothers.  The gun battle lasted around 30 seconds, leaving three dead.  The biggest mystery is did it really take place at the O.K. Corral or behind it on the intersection of Third Street and Fremont Street in Tombstone, Arizona?  Many say it happen behind the corral.