- November 15, 2012
Located in western Arizona in La Paz County sits the small town of Quartzsite.  Like many of the towns in Arizona, mines were a prominent resource in their heydays.  These days, Quartzsite has a few thousand residence but can get over two million visitors a year which keeps the economy going.  The area has a large RV park and is usually full to capacity in January and February when the weather is amazing.  Quartzsite is also known for having the largest rock and gem show.  People come from all over to attend this event.

Quartzsite does have some interesting places and things to see while in town.  One is the grave marker of Hadji Ali or better known as Hi Jolly.  He was "an Ottoman citizen of Greek-Syrian parentage, who took part in the experimental U.S. Camel Corps as a camel driver".  Stories such as Ghost Camels and the Red Camel with its Headless Rider came to life after the Camel Corp disband and the camels were let go.  Some of the camels ended up roaming the barren desert. 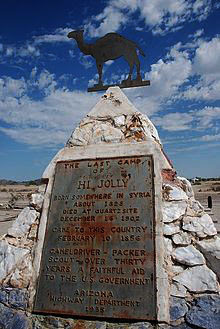 Another place to see while in Quartzsite is the Quartzsite Yacht Club.  The building was once known as "The Jigsaw" and bought by Al Madden in the 1970's.  Al had a bit of a sense of humor and renamed the place the "Quartzsite Yacht Club Bar and Grill".  He came up with the motto, "Welcome aboard, long time, no sea" because there was any water around for miles.  He also thought it would be fun to sell memberships to whoever wanted to purchase one.  In 1995, the restaurant burnt down and Al decided to have it rebuilt.  The stress was too much for Al to handle and he died a year later.  Today, Al's legacy is still kept alive as well as his memory.  Some might tell you that Al is still watching over his dry-dock yacht club located in the desert.
bar cafe desert historical towns