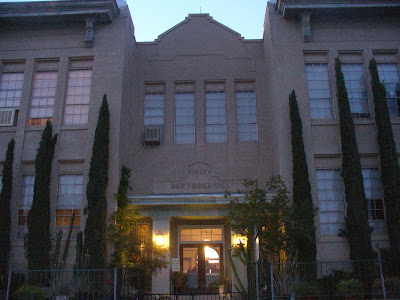 Globe, Arizona, has many places around town for visitors to check out.  The historic district has old buildings with businesses, places to quench your thirst, and to grab a bite to eat.  It has antique and other unusual shops and even abandoned buildings for the urban explorer to photograph.  The Old Globe jail and courthouse are a couple of historic places to take a tour of.  Not far from downtown are the Besh-Ba-Gowah ruins and mines.  Sitting above the town on a hill is the Noftsger Inn.  This Bed & Breakfast is the perfect place to stay while you are passing some time in Globe.

The building started out as the Noftsger Hill Elementary school and was built in 1907.  The Old Dominion Mine is nearby with a view of the valley from the front of the inn.  Even while the children were roaming the halls and sitting in the classrooms, claims of paranormal activity was reported.  A mysterious lantern light was seen shining through the windows when no one was inside.  The children noticed their books were moved and not in the same place they left them the night before.  Also, children’s voices could be heard in the halls and rooms when no children were present in the building.

The school was closed in 1981 with the ghost stories being reported more and more by witnesses.  There was a rumor of teachers buried in the basement leaving many to speculate the place is haunted.  While the place stood empty, a woman living nearby said she kept hearing a telephone ringing from inside the building.
Today, the Noftsger stands as a six room Inn with more rooms being renovated.  Sharon and I stayed at the Noftsger a couple of times and we did have interesting experiences.  During our stay in room 3, we experienced hearing a little girl, unexplained noises, weird EMF readings, strange EVPs, and a Barbie doll sitting on the chalk board moving its position.  I am hoping to be a part of a ghost investigation at the Noftsger in November.  We will have the whole place to ourselves and spend the entire time investigating every nook and cranny.  I am hoping to have some fascinating stuff to tell you afterwards.