- September 22, 2013
When thinking of a town to visit in Arizona, Casa Grande will probably not be the first place you will think of.  I have personally been to this town several times and always found something interesting to see.  Casa Grande has Native American ruins, historic downtown, along with many places to eat, shop and spend the night in.  If you are into urban exploring, this town is loaded with places to photograph. 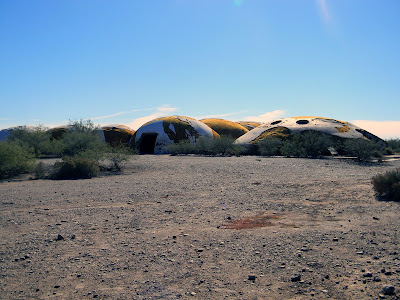 Just on the outskirts of southern Casa Grande you will find an unusual site known as The Domes.  The odd shaped structures resemble either a flying saucer or a giant caterpillar.  You get a feeling that you have just entered an episode of the Twilight Zone.  What are the Domes and why were they built in this desolate location?

In July of 1982, Patricia Zebb, owner of InnerConn Technology Inc. was looking to move her operations from California to an out-of-the-way location near Casa Grande.  To survive the Arizona desert, the Domes was constructed of Thermoshell materials in a dome shape.  This was not only cost efficient but provided the perfect insulation from the hot Arizona weather.  The walls and ceilings were constructed by pouring three inches of polyurethane, and then three inches of concrete against a balloon held by a steel skeleton.  But because InnerConn defaulted on a loan, the place never produce any items and was closed down in 1983.  It was purchased in 2006, but remains empty until this day.

Since its closure in 1983, the Domes have endured the harsh weather, various critters, and humans playing havoc on the ever crumbling walls and ceilings.  Inside the walls are covered with graffiti and trash is thrown everywhere from parties thrown by the youth in the area.  Each time I have seen the place, more of the structures’ ceilings are lying on the ground.  The Domes are slowly disintegrating.  Also, the place has its fair share of ghost sightings as well.  People have see shadow figures, unseen footsteps, and whispering.  Sharon and I have hopped the wire fence to get up close and personal with the Domes, but that is discouraged by the owner.  He is now offering the Domes for rent either for a day, a night, or both. 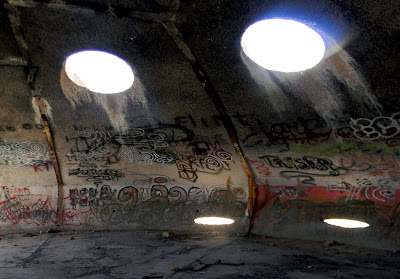 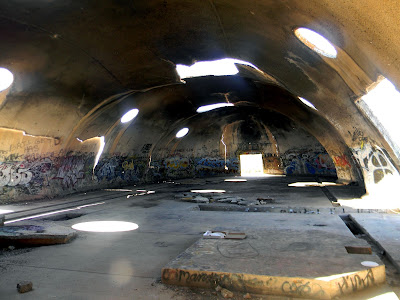 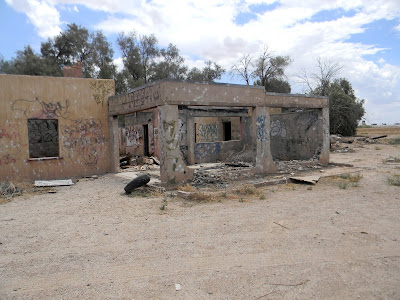 Near Interstate 10 in Casa Grande sit an abandoned house and barn.  The locals and others call this place the Slaughterhouse because the man who owned the place slaughtered beef there.  Of course, like many places, rumors of other seedy activities went on there as well.  The walls on most of the house are covered with graffiti and the ceiling is missing on a majority of the structure.  Inside, you wander through the rooms where a fireplace sits in what was once the living room, and a dirt covered tub is all that is left of one of the bathrooms.  The only rooms with a ceiling were not accessible because a bunch of bees decided to make the place there home.  The barn next to the house is in just as deplorable shape with a missing roof in one section while the existing roof was warped and nearly falling in another.  Inside one of the tiny barn rooms was a mummified puppy.  I don’t want to know what happened to that poor thing. 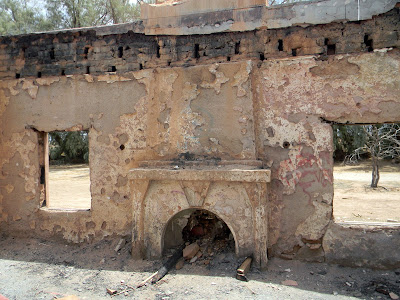 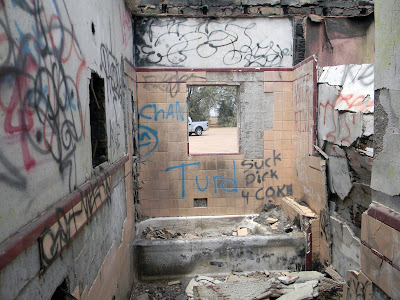 We have tried to visit the Slaughterhouse and barn a few times after our first visit but a squatter has made the place his home along with his not-so-friendly dogs.  We decided not to upset them and passed on seeing the place. 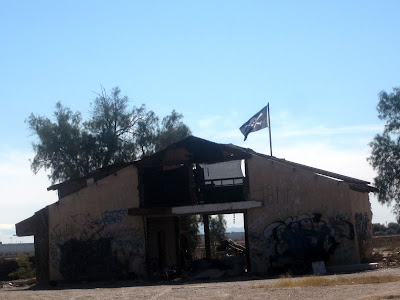 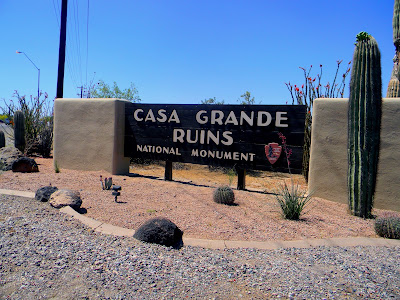 The Casa Grande Ruins National Monument is actually located in Coolidge which is near Casa Grande.  The well preserved Hohokam ruins are several partial structures with small room in each one and surround a massive four story Great House.  The walls are a mixture of a concrete-like combination of sand, clay, and calcium carbonate or limestone.  The base of each wall is four feet thick and taper to a thinner thickness towards the top.  The ceiling consists of hundreds of trees which were found 60 miles away and floated down the Gila River to the site.

When you visit the monument today, you will first enter through the Visitor Center, and wander through the museum.  Inside, you are treated to artifacts and photos of the site in earlier times.  Through the door lie the grandiose Great House and the other places where the Hohokam people once lived.  While walking around, Native American flutes are resonating throughout the place.  Above the Great House is a large metal structure protecting it from the inhospitable Arizona elements.  Another path will take you to where the ball court once existed.  This dirt pit formerly served as a recreation area.  This century old ruin is worth taking time to visit. 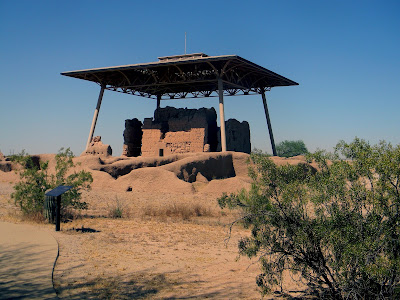 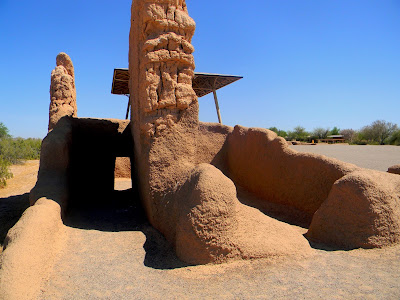 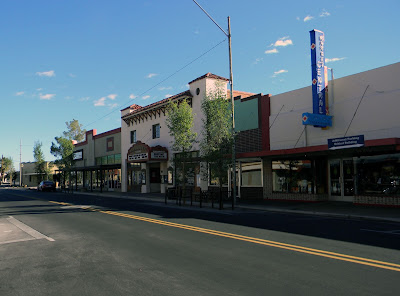 Casa Grande has many abandoned places all around town.  There are abundant amount of empty homes, motels, and businesses.  The downtown area of the town has historic buildings, and for the most part, they sit empty.   I would say, Casa Grande is an urban explorer’s dream place to wander around and photograph. 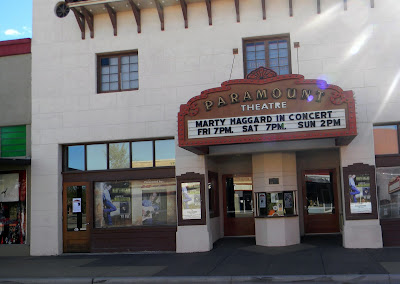 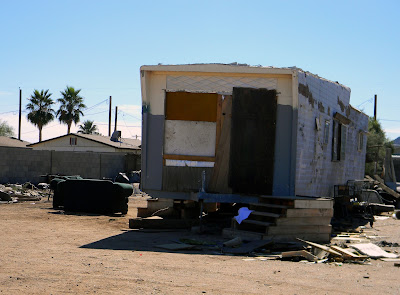 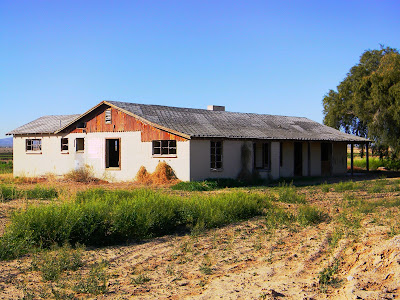 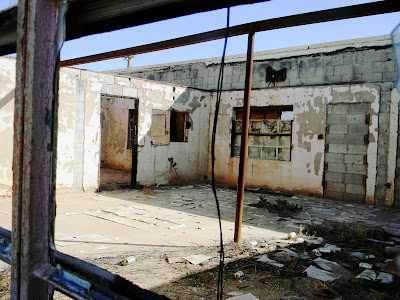 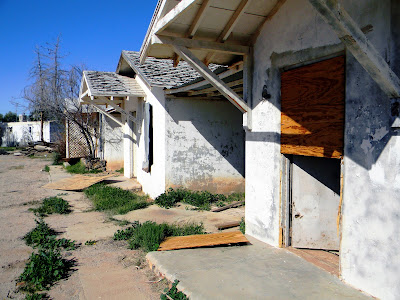