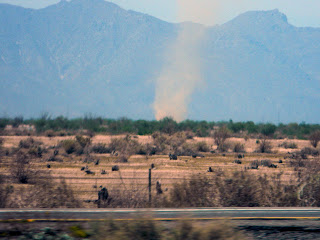 While traveling around the state of Arizona our chances of seeing a dust devil or two are very good.  A dust devil is a robust, shapely, and fairly long-lasting whirlwind which can be as small as a few meters to over 1000 meters tall.  The basic movement for a dust devil is usually a rising motion from the ground.  For the most part, dust devils are not dangerous, but there has been that unusual time they increase big enough to cause harm to people and land.  Sometimes they are compared to tornadoes, but dust devils manifest in sunny circumstances during calm weather and almost never get to the extreme force of a tornado.

(from Wikipedia)  “Dust devils form when hot air near the surfaces rises quickly through a small pocket of cooler, low-pressure air above it.  If conditions are just right, the air may begin to rotate.  As the air rapidly rises, the column of hot air is stretched vertically, causing intensification of the spinning effect by conservation of angular momentum.  The secondary flow in the dust devil causes other hot air to speed horizontally inward to the bottom of the newly forming vortex.  As more hot air rushes in toward the developing vortex to replace the air that is rising, the spinning effect becomes further intensified and self-sustaining.  A dust devil, fully formed, is a funnel-like chimney through which hot air moves, both upwards and in a circle.  As the hot air rises, it cools, loses its buoyancy and eventually ceases to rise.  As it rises, it displaces air which descends outside the core of the vortex.  This cool air returning acts as a balance against the spinning hot-air outer wall and keeps the system stable.  The spinning effect, along with surface friction, usually will produce a forward momentum.  The dust devil is able to sustain itself longer by moving over nearby sources of hot surface air.” 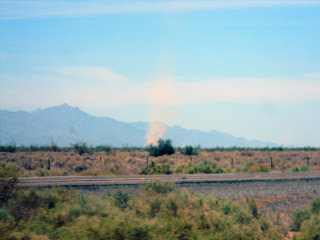 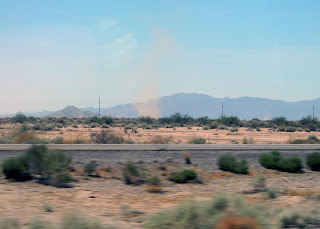