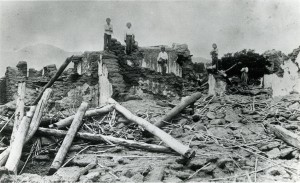 In 1887, Tucson was rocked by an earthquake.  The center of the quake was about 200 miles southeast of Tucson near Bavispe, Mexico.  Since it occurred 13 years before the Richter scale was presented to the world, they roughly guessed it as a 7.2.  The only structure damaged by the quake was at San Xavier.  One of the adobe walls crumbled down.  A huge plume of dust was seen cascading over the old Santa Catalinas mountain range.  The Tombstone Epitaph noted that in the Dragoon Mountains a volcano has erupted right after the earthquake.
cities historical