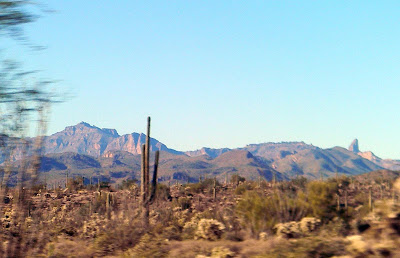 Tucked in the Superstition Mountains and named after Pauline Weaver, sits a 1,000 foot-rock column called Weaver's Needle.  Seen for many miles, this boulder is made of "a thick layer of tuff (fused volcanic ash)" which was heavily eroded resulting in a unusual peak with a split in the rock resembling the top of a needle.  This split makes it look like it has two tops and is only visible on one side with many cacti surrounding it.

Weaver's Needle is part of the legend of the Lost Dutchman's Mine.  They say that the rock's shadow points to the area where the gold can be found.  Many have looked for this mysterious mine and either came back empty-handed or died from the harsh desert weather.