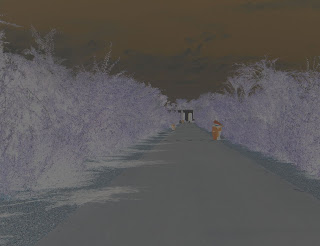 In Wikipedia an alley or alleyway is described as “a narrow, pedestrian lane found in urban areas which usually runs between or behind buildings. In older cities and towns in Europe, alleys are often what are left of a medieval street network, or a right of way or ancient footpath in an urban setting. In older urban development, alleys were built to allow for deliveries such as coal to the rear of houses. Alleys may be paved, or simply dirt tracks. A blind alley has no outlet at one end and is thus a cul-de-sac. The term Alley is also used for the gap between two columns of text.”

Of course an alley can be a very scary place to be especially after dark. Most alleyways are pitch black with trash cans lining each side of the drive and other filthy, dangerous items scattered along its path. There might be rabid rats and other varmints roaming around in the darkness waiting to pounce. Then there are the creepy humans that might be looking for food or any other treasure that we considered trash. They are usually harmless but unnerving and sometimes don’t smell pleasant.

Unfortunately some have met their demise in an alley. One such case is in Canada where a little girl was murdered. They say that her vengeful spirit still haunts that very alley and most won’t go near it. We have several haunted alleys in Arizona, but the one I hear about the most is Jo Jo’s Alley.

There are mysteries surrounding this elusive alley. Where did the name come from? I tried to find that answer but could not. Another argument bantered about is the alley’s exact location. Most of the stories I have read has put the site of the alley in much the same area. I went to the latest location and from the description; I am pretty sure that was it.

Tucked in the middle of Phoenix is a small street with asphalt paving and lined with oleanders that are shaped over the alley like a tunnel. Not much reported in the day but at night is when all the action happens. Because of the lack of lights and the creepy oleanders, the drive is told to be a scary one. Some of the ghostly claims are of strange lights chasing your car and the sound of pounding hands hitting the top of the car as you drive down. Others have reported seeing ghostly figures in the alley as they travel past the oleanders. I have not been down this alley at night, but it is on my to-do list. I will be sure to video tape the entire experience and hope that the ghosts are willing to show up.
ghosts haunted places