Where is the Billington House Hiding? 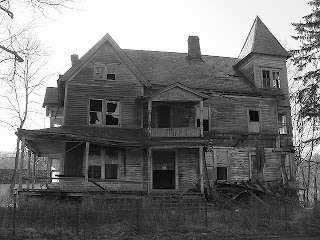 Just like many other cities across the US, Phoenix has its share of haunted houses. One house I have heard is very haunted is the Billington House. The big mystery is not just what happened there but where the hell is the house located? When I looked up information on this elusive dwelling, all I could find is a zip code. I pulled up maps for Phoenix zip codes and found the general location of the house. That particular area was small so I thought it should be easy to spot an old haunted house, but I was wrong.

One Thursday armed with my camera, I was on the hunt for Jo Jo’s Alley, the location where a 9 year old girl’s ghost had been seen, and the Billington House. I had my Google maps pinpointing the locations and the route I was going to take. Since Jo Jo’s Alley was near my house, I started there first. After driving the creepy alley, I headed downtown where the other two places were located.

The cross streets in Phoenix are laid out nicely, north-south and east-west. Some are one-way but are well marked so you won’t be facing on-coming traffic. The only bummer was all the damn construction. I did manage to find the cross streets where the little girl was hit by a car and where her ghost likes to make its presence known. After I took some pictures, I was off to find the Billington house.

Jeez, I must have circle that entire zip code several times and never saw anything that could possibly be the house. I looked for signs that might help locate this place, but saw nothing. Downtown has lots of old buildings that could have been it, but it was hard to tell. Alas, I had to give up and drive my disappointed butt home. I will go searching for it one more time since Halloween is approaching and finding as many haunted houses in Phoenix and surrounding cities is my goal for this spooky season.

Here is one of the stories that make this house worth the find:

Even though each family member has experienced something paranormal in the house, it is the youngest daughter that has acknowledged most of the unusual occurrences. While home alone, she had reported hearing footsteps and disembodied voices. She had seen a white radiant figure staring at her while standing still in the second floor window of her playhouse. This figure appeared to have only one arm and could only be seen in the nighttime. It showed up three consecutive nights and by the fourth night, it was gone. She even reported the incident to her father, but he never saw anything unusual in the tree house. This isn’t all this child saw that scared her. One night she woke up, went to her window, and saw a man in a long black coat and hat standing on her patio. She blinked out of fear, and the man was gone. Also, on several occasions, she had reported seeing a woman peering from her closet and smiling at her. The woman would be just standing there, and then quickly disappeared.

I don’t know why this particular child experienced most of the activity, but these are questions I would like to get to the bottom of. Perhaps Autumnforest and I can find this house and do an impromptu investigation to see if the stories are true. The only problem is we have to find this mysterious abode first.
haunted places