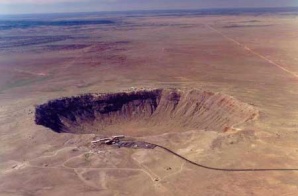 About 50,000 years ago, a deep hole was formed when a meteor struck the Earth about 35 miles east of Flagstaff, Arizona.  This crater measured three-quarters of a mile wide and was about 700 feet deep.   This impact caused hurricane-force winds blowing in all directions with about 175 million tons of rock thrown into the air.  It only took 10 seconds to form the meteor crater causing a huge void surrounding the area.

At first, it was thought that a volcanic blast caused the large gap in the Earth’s surface, until in 1903, Daniel Barringer, a Philadelphia mining engineer, went to the site.  He determined that the huge cavity was made by an enormous meteor.  Barringer bore holes at the bottom of the crater to prove that he was accurate.  He found oxidized meteorite fragments which convinced other researchers that his theory was correct.

I have been able to visit the Crater twice. My first visit was in the summer with my family when my kids were little and another time was in February with friends of ours from Pennsylvania.  It was so cold and windy on the February visit.  The place has a visitor center with much information about the Meteor Crater.  You can watch videos on how it was formed as well as seeing pieces of the meteor itself.  You step outside and take various paths to landings that hang over the crater to get an amazing view of how enormous the hole is.  It is definitely a site to be seen if you ever get to Arizona.