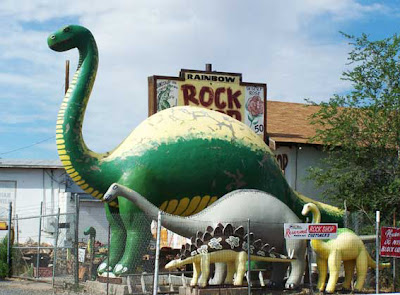 They may have walked the Earth millions of years ago, but some have seen them in the minor town of Holbrook, Arizona. When you drive to the community located in the northeastern part of the state, you will feel like you are in the movie Jurassic Park. Along Route 66 there are yards of these intimidating creatures dotting the area. They range in the large to small and scavengers to the plant eating herbivores.

The Rainbow Rock Shop has many of these handmade dinos created by the owner Adam Luna. His first creation was built in 1987, and for over 8 years he added families to his collection. Most of his dinosaurs are the less intimidating kind because he didn’t want to frighten the children who visited his shop. He did sneak in a T-Rex with a helpless lizard in its mouth but says, “He is not planning on eating him”.

A block north of the Rainbow Rock Shop is Adam’s home where a menacing dinosaur used to sit in his yard. This fierce beast looks very cranky and stares down all the drivers who pass by. He was bought by a family in Fountain Hills but because of its size and weight, it was too much to move. The malicious prehistoric dino sits in Holbrook today daring people to drive by. 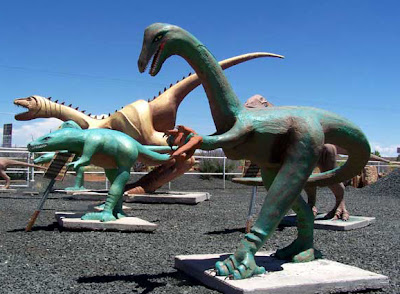