Remnants of the Hohokam


History tells us that the Hohokam tribe migrated north from Mexico and settled in southern Arizona. The name Hohokam derives from the word Hoohoogum, given to those living in that region of the southwest desert and means, “Those who have gone”. From the Hohokam ruins we can see they were a skilled group of farmers who built elaborate canals that went on for miles. Not much was known about this tribe nor written about their demise. We are able to study them through the well engineered canals, ruins, and written stories on rocks known as petroglyphs which were left behind. 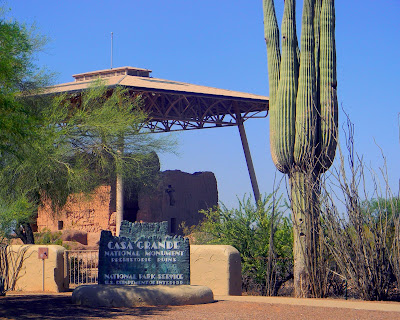 Casa Grande Ruins National Monument are located one hour southeast of Phoenix in Coolidge. These well preserved remains are where the ancient Hohokam once lived. The main building, or Great house, is four stories high and 60 feet long. The first floor is on a mount and the walls are a mixture of a concrete-like combination of sand, clay, and calcium carbonate or limestone. The Great House took 3,000 tons of Caliche mud which was layered resulting in the walls being four feet thick at the base and tapered towards the top. Anchored in the walls and used to form the ceilings were hundreds of juniper, pine, and fir trees they carried or floated 60 miles down the Gila River. 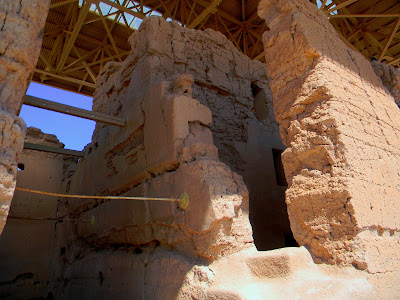 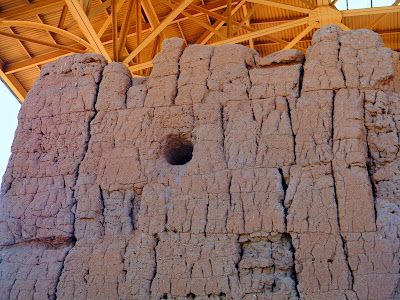 The walls of the Great House face the four cardinal points of the compass and a circular hole in the upper west wall aligns with the setting sun at the summer solstice. The other holes in the walls each lined up with the sun and moon at specific times. It is a great mystery to why the Hohokam built this structure to those exact measurements. They were spiritual people who were often thankful for all the gifts nature gave them. Each night, the entire community would gather in the Great House and watch the setting sun through the small hole in the upper west side of the building. 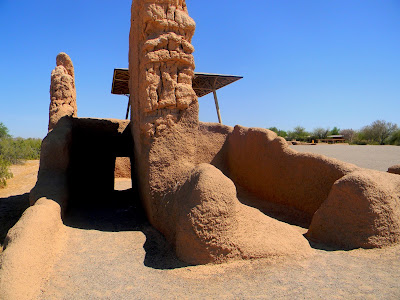 Surrounding the Great House were many other structures. These buildings were where the families of the village once lived. The walls were two to three feet thick and also formed from the same mixture which was used to construct the Great House. The open spaces were used for recreation and a market area where they sold their handmade goods. They also dug pits which were used as ball courts for playing games and having gatherings. This ancient civilization survived on the crops they grew, animals they hunted, and the natural plants they found in the surrounding desert. They had abundant water source from the nearby Gila River.
Around the 1400’s, the Hohokam people just seem to fade away mysteriously. In 1694, when the Spanish missionaries discover the Casa Grande ruins, it was just a vacant structure. For two centuries the ruins were pillaged by relic hunters and visitors curious about the site. In 1892, after years of trying to preserve the site, the Casa Grande Ruins were the first in the nation to become an archeological reserve. 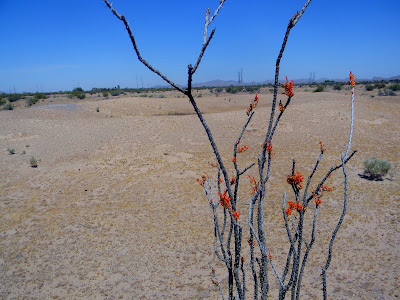 Today, when you visit the site, there is a feeling of eeriness surrounding the place. You enter through the Visitor Center, pay a fee, and wander through the museum. Inside, you see all the artifacts which were unearthed on the site, photos of the ruins in earlier years, and models of how their community may have appeared when the Hohokam lived there. Through the doors lies the main site where trails take you to the remnants of the grandiose ruins and where the populace once endured.  While you are walking around the grounds, Native American flutes are resonating throughout offering a peaceful feel to your visit.
You can help but notice the Great House which is protected by the harsh sun with a large metal structure which covers the entire building. The walls in some areas have crumbled down leaving openings for you to see inside. You can also see how thick these clay walls were and be amazed at the massive size of the four story complex. The surrounding buildings are just half walls giving you a sense of the tiny quarters they used to live in. Another path will take you across the parking lot where a picnic area with shaded tables is located. Next to this space is an elevated structure for you to observe the site where a primeval ball court once existed. What used to serve as a recreation area some time ago is now just a dirt pit. Many mysteries and stories are still hidden amongst the thick walls of these amazing ruins. 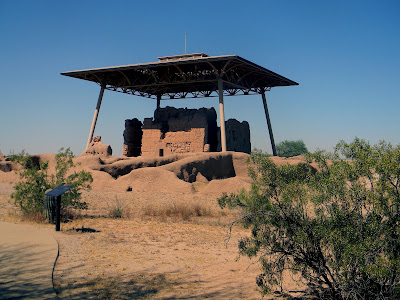 Casa Grande Ruins National Monument
1100 Ruins Drive
Coolidge, AZ 85128
Phone: (520) 723-3172
Website: www.nps.gov/cagr
Hours: Open daily from 9:00 am – 5:00 pm (Closed Thanksgiving and Christmas Days)
Fees: Adults (16 and older) $5.00; Children (under 16) FREE
Directions: The Park is an hour southeast of Phoenix in Coolidge, Arizona. From I-10 take the Coolidge exit and follow the signs to the park entrance off AZ 87/287.
*For special passes, see the following website:
www.nps.gov/cagr/planyouvisit/feesandreservation.htm 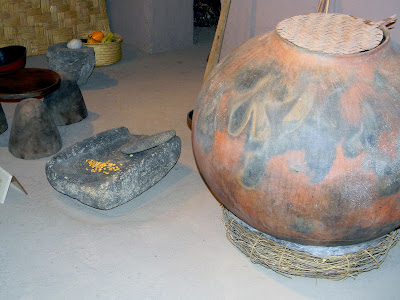 Snaketown are ruins situated near Sacaton and smack dab in the middle of the Hohokam Pima National Monument. This site has unrivaled all other Hohokam settlements in the area. They started digging the region in 1930’s and continued to break ground in the 1960’s. It appeared by what they found that an ancient tribe lived in the dwellings about 300 BC to AD1050. They unearthed two ball courts, a little pile where rituals were performed, a central plaza, many living spaces (pithouses) for families and groups of people. They figure that several thousand people many have lived in that community at one time. In 1964, it was listed as a National Historic Landmark and a National Monument in 1972. The site is owned by the Gila River Indian Community and at the present time Snaketown is not open to the public.
Hohokam Pima National Monument
http://www.nps.gov/pima/index.htm
Mesa Grande is a huge Hohokam establishment found in Mesa. Its findings also revealed that this settlement probably existed from AD 200 to 1450. They started digging the site in the 1990’s and are continuing excavation till this day. It appears that the site once crossed over 100 acres, but is now a small plot of land because of the growth in construction surrounding it. The sites sits just west of the Mesa Hospital with mounds and well preserve structures. A fence surrounds the area and was put on the Arizona Preservation Foundation’s list of Most Endangered Historic Places.
Mesa Grande
1000 N. Date Street
(Corner of Date and 10th Streets)
Mesa, AZ 85201
Phone: (480) 644-3075 (Mesa Grande Visitor’s Center)
Website: http://www.azmnh.org/arch/mesagrande.aspx
Hours: 10:00 am - 4:00 pm (Thursday & Friday); 11:00 am - 4:00 pm (Saturday); 12:00 – 4:00 pm (Sunday); closed (Monday thru Wednesday)
Fees: Adults (12 & older) $5.00; Children (3-12) $2.00
Mesa Grande Cultural Park
http://azmnh.org/arch/mesagrande.aspx 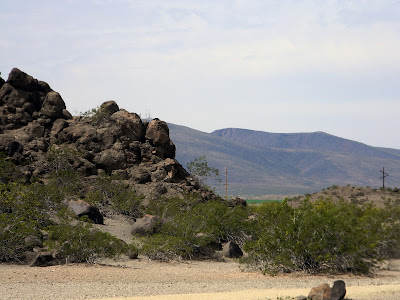 Fortaleza Indian Ruins are situated about 45 miles southwest of Phoenix near the town of Gila Bend. The name is Spanish for “Fort on a Hilltop” and sits alongside the north bank of the Gila River. This unmistakable fortress was built strong to stand up to what the desert elements had to offer. The Hohokam people lived in this community around 1200 to 1450 which is located on the southwestern portion of the Hohokam terrain. They figure that it may have taken the tribe over 75 years to complete the 60 rooms which inhabitant the site. Time was not gentle to the ruins and throughout the years people pillaging the artifacts and the harsh desert weather almost wiped it out of existence. In the 1960’s they rebuilt many of the walls using the same materials the Hohokam used and stuck with the same floor plan as well. In many other Hohokam sites several artifacts were uncovered, but not so much in the Fortaleza location.
Today, the Tohono O’odham Nation maintains that they are descendants of the Hohokam people and believe Fortaleza is a spiritual site. They used to allow people to visit the site with a permit, but no longer forbid anyone to enter the area and have posted “No Trespassing” signs. Perhaps in the future they will change their minds and let us enjoy the ruins once again.
Gatlin ruin is only a few miles from Fortaleza and near the Painted Rock Petroglyph site. This Hohokam village probably housed around 500 residents and was an important area for farming and trading goods. Gila Bend owns the Gatlin site and will add a cultural and educational park to the place.
For more information of the Fortaleza and Gatlin ruins, please contact:
The Town of Gila Bend
644 W. Pima Street
P.O. Box A
Gila Bend, AZ 85337
Phone: (928)683-2255
Website: http://www.gilabendaz.org