The Mysteries of Gila Bend

There is one little town set in the middle of the desert that wouldn’t appear to be a hotspot of UFO and even Bigfoot activity, but Gila Bend can brag that it is. Founded in 1872 and located in Maricopa County, Arizona, Gila Bend gets its name from the 90 degree bend found in the Gila River at the point where the town is established. With a population of about 2,055 people living in this town, it is the roadside attractions, Spaced Age Lodge and unusual theme of the place that seems to keep the tourist and enthusiasts coming along with the UFO hunters. Gila Bend is a popular place for many UFO sightings. There have been numerous reports of strange objects and lights in the sky which have been hard to explain. 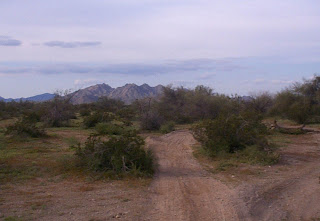 Here is some history of Gila Bend from Wikipedia: “The town of Gila Bend is situated near an ancient Hohokam village. When Father Eusebio Francisco Kino visited in 1699, the older site along fertile banks of the Gila River had been abandoned by another early tribe called the Opas, who instead used the river to irrigate their crops at a nearby rancheria. This same rancheria was visited by Juan Bautista de Anza, commander of the Presidio at Tubac and founder of the city of San Francisco, and by Father Francisco Tomas Garces in 1774. The nickname the "Crossroads of the Southwest" stems from the area having been part of an important transportation route in the settling, development and growth of the Great Southwest. Gila Bend was the "center of a wheel", with spokes leading in many directions throughout the region. A more recent event in the area was the October 1995 sabotage of the Amtrak Sunset Limited train.”

Among the quirky roadside attractions and the space age café are many mysterious graves. No one is sure who is buried in most of them, but they seem to be all over the town. Another reported sighting that you would never equate with a desert town is that of the elusive Bigfoot. On some of the rocks in the middle of the desert, picture graphs have been found with drawings indicating a large hairy creature was seen in that area. Others have their own eerie stories of encounters with the beast.


Sharon (Autumnforest, Ghost Hunting Theories ) and I are taking another one of our daytrips, this time to Gila Bend. On our way are the abandoned trailer park and the burnt down house we found. By the way Max Evel, we are giving you a days notice to clean up the park for your visitors. I am confident that you can get it done. Anyhow, I will be taking lots of photos of the trip while Sharon will be documenting the trip on her flip camera. Look for both of us to do one or more posts on the trip depending on how much information we collect. 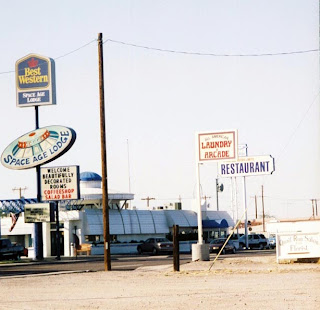