- June 09, 2011
I posted this over two years ago.  Since it is almost monsoon season and the dust storms are kicking up, I thought I would repost it.


Every year during the monsoon season in Arizona, a massive dust storm moves through the state and swallows up every city in its path. Tonight, it has returned. These dust storms devourer whole cities like Tucson, Phoenix and all their surrounding cities. I have seen them on the TV news slowly making a meal of people, homes, vehicles and anything else in their disruptive path. You watch as a huge wall of dust makes its way slowly towards the city you live in knowing what is about to come. The sky turns from blue to a dusty brown and you feel the wind pick up in a rapid movement. For a few minutes, your eyes water and you can’t breathe. It is a person suffering with allergies worst nightmare. (That would be me). You watch as your lawn furniture topples over and flies into your neighbor’s yard. You are better off being home or safely in a building and not in your car on the road because the visibility will disappear quickly as it moves over your vehicle.

One time after picking up my kids from a water park, we got caught in one. The visibility quickly went from clear to zero. I put on my low beams and moved over to the right as far as I could. The car in front of me disappeared which made it pretty scary. We sat there hoping that other cars would see us if they were stupid enough to continue driving. After a few minutes, the dust and wind went by and I was able to see the road and other cars again.

I realize that a dust storm is not a bad as a tornado or hurricane, but for us Zonies it’s something we live with every year and causes lots of damage. But, considering what lives in the Fog and Mist, we wonder what type of creepy creature is living in the Dust storm. Muahahahaha! 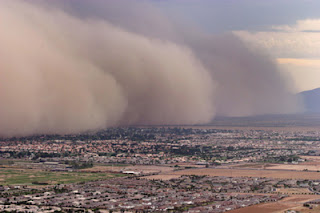